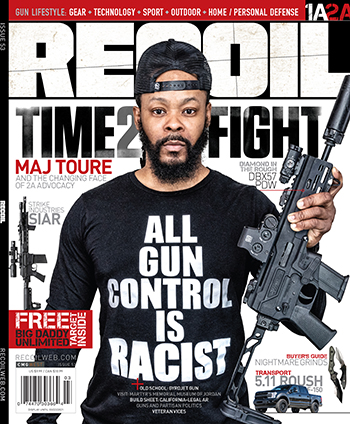 With everything that’s happened in the past 12 months, you’d expect that someone in the firearms publishing biz would have something to say on the subject of guns and race. And yet, the silence has been deafening. RECOIL has a history of tackling uncomfortable topics — ones that old-school, established media in this space would rather ignore. So rather than sweep it under the rug, we decided to kick off that conversation by bringing in one of the most ardent proponents of the Second Amendment in the Black community.

As a whole, we gun owners are overwhelmingly white and male, and, to date, any efforts to change that have tended to be perfunctory and patronizing. Now, you could take the position that no change is necessary, but you’d probably be consigning the 2A to the dusty annals of history if you did. Without bringing in people who don’t look like the stereotypical gun owner, demographics alone will ensure that in a couple of generations our cherished rights as we know them will no longer exist. That trajectory is baked in. Among the almost 8-million new gun owners joining our ranks in 2020, Black gun ownership rose proportionally more than any other market sector. This alone indicates there’s an increasing appreciation for the benefits of gun ownership and a hunger for knowledge about a subject that’s traditionally fallen outside the narrowly defined parameters of what’s considered socially acceptable in that community. But anti-gun politicians will do their damnedest to ensure their constituents stay on the plantation, toeing the established line and conforming to a stereotype every bit as entrenched as the one that gun owners are supposed to adhere to. It’s time that changed.

The Second Amendment is for everyone, and it’s up to us as individuals to bring that message to as many people as possible. No matter their gender, sexual orientation, country of origin, or color of their skin.

If, and Even Against Censorship