The Sig MCX, a rifle that’s been somewhat overshadowed by new MPX sub-caliber rifles, is authentically intriguing. One can tell immediately that there are some significant deviations from a standard AR-type rifle. While unique stylization is just a punch of a CNC button away, there’s more here than meets the eye. What I first noticed was the functional folding buttstock. There have been a few different rifles with that feature, all of them relatively rare in a full rifle caliber AR, and it always gets the gears turning once it’s seen.

Then you learn it’s available in (3) different calibers: 5.56, .300blk, and 7.62×39, and that the time needed to swap the barrel is scant indeed. Okay—even more interested. The multiple caliber capability was required to apply for an exclusive and elusive small volume government contract.

A lot of people have had opportunities to shoot Sig’s new MCX rifle, myself included. Though this isn’t exactly a review (I have a few hundred rounds through one at most) I will say that it was incredibly controllable, especially in full-auto. Very flat and low recoil impulse, with no significant increase in felt recoil when shot suppressed. After swearing a blood oath, Sig let me take it apart.

Bear in mind that this was a preproduction sample and that some features may be different on full production versions (and well, it’s dirty). I have done my best to document these differences wherever possible. There are some familiar features on the MCX, reminiscent of some other designs, but no one has combined them in quite the way Sig has.

Let’s start with the front end. The barrel has a tapered profile at the crown. This allows for Sig suppressor compatible muzzle devices and direct-thread suppressors to be installed without the need for peel or crush washers. The taper provides for self-centering and an increase in overall surface area for a secure fit. This tapered design is backwards-compatible with standard muzzle devices, so no special adapters are needed; if you’re already married to a particular muzzle device there won’t be any fitment issues. The barrels are nitrided for superior corrosion and erosion resistance and will be initially available in lengths of 9 and 16 inches. I’m told custom barrel lengths will be made available for professional end users. Moving back we come to a gas block which is held firmly in place by two large pins. An adjustable gas regulator (production guns are auto regulating) can be removed by depressing a detent and rotating it free. The small gas piston can then be pushed out from the rear. We’re in familiar territory. Further inspection of the barrel shows an extractor support pin inside the barrel extension, which is featured on all modern Sig AR-type rifles. The front handguard is definitely a step away from the norm. Oblong in shape with Keymod down the sides and bottom, the handguard can be removed in about two seconds (what’s the point of a barrel that can be quickly changed if it takes forever to remove a handguard?). To remove, simply separate the upper and lower and slide it off. The top of the forend has little rails that interface with the MCX monolithic upper receiver and the entire piece is held on with the front pivot pin. Very cleverly done. The barrel is affixed with a set of torx screws that run below and parallel to the bore. They are marked, ‘1’ and, ‘2’ to designate the order of installation. The screws are captive so you won’t lose them and internal springs give them constant pressure. Simply unscrew and pull. At this point we’ve reached the guts, and the most interesting portion to me. The proprietary charging handle is pulled and bolt carrier group (BCG) come sliding out. Don’t let the, ‘proprietary’ part of the charging handle scare you—it’s fully ambi with nice sized (but not too large) handles. Both the bolt and carrier are both Nickel-Boron’d (NiB). The BCG is obviously truncated (how else would the stock be able to fold?). Instead of one large captive action spring, dual springs ride along the top of the BCG and connect to the op rod. Removal is similar to that of a 10/22, relieve some tension and the internal rods can be taken out (first one, then another). After removing the bolt through the normal procedure, we’re met with yet another surprise. The bolt tail doesn’t have the familiar scoops but instead has been reduced to a straight walled cylinder. Firing, cam, and cotter pins all appear to be of standard design. The op rod exists where the gas key would make its home on a regular AR. Removal is accomplished by pressing up through a hole in the carrier and depressing a detent. At that point the op rod will just slide right off (installation is ever simpler, as it can be coolly slid on). Though the upper receiver is constructed of 6061 aircraft quality aluminum, Sig went the extra mile and integrated replaceable steel reinforcement plates on the wearable portions of the upper. To include: bolt cam pin travel path, charging handle latch points, and feed ramps. You can also see that the upper has a replaceable forward assist housing. 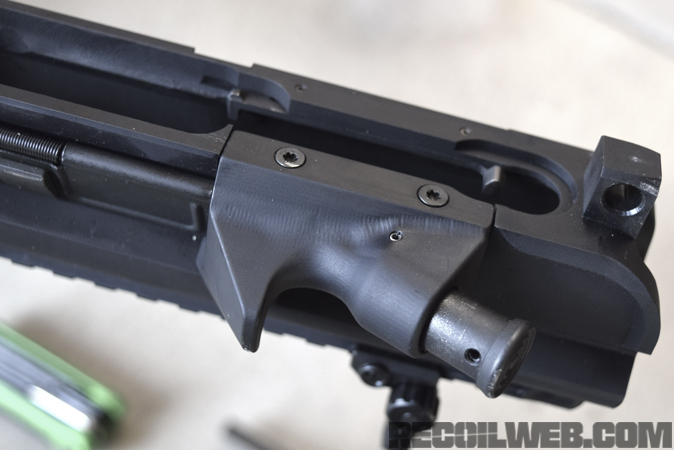 The lower features the same aesthetics. I’d call the controls, ‘Normal+’. An oversized-but-not-obnoxious ambidextrous magazine release is located on either side. The bolt catch/release has a nice extension but still remains low-profile. A decent flare on the magwell for easing reloads and a winter trigger guard are also present. A pair of inset QD mounts are positioned right in front of the buttstock. I would seriously consider this lower with any upper. 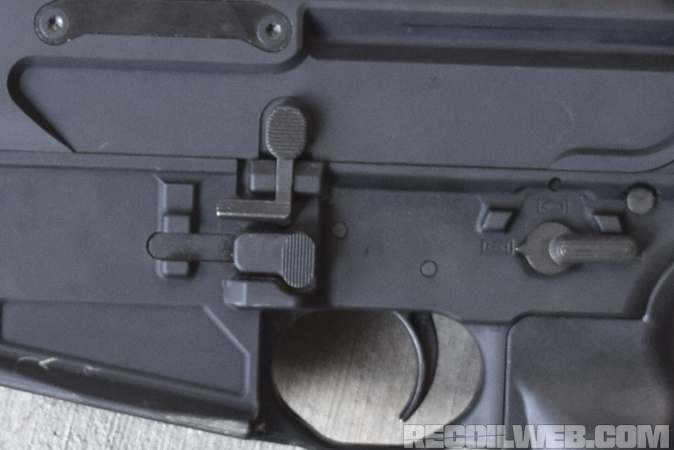 Good news for those that have registered M16 receivers, the MCX upper is compatible with standard lowers, so long as an adapter is used (though no doubt the stylization of the upper would look a little weird with say, a slabside lower receiver). A hard rubber buffer is secured into the receiver extension threads. Any folding stock that you’d be able to run on an AR (like many do with dedicated .22lr conversions) can now be used in conjunction with the MCX. 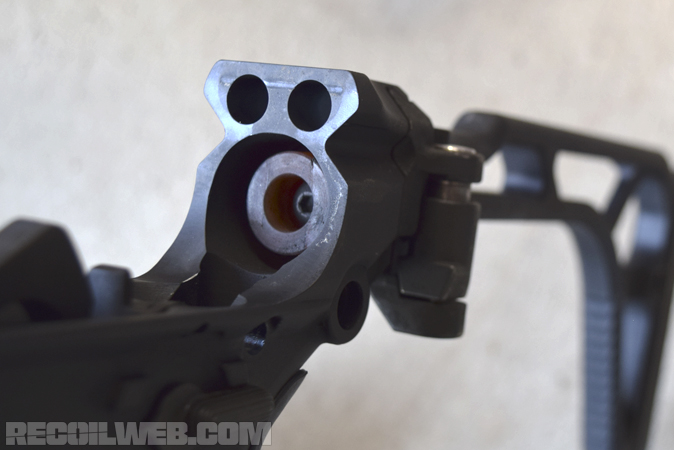 Sig has been bringing a whole lot to the table lately. Suppressors, accessories, rifles, handguns et cetera. However, at the top of my personal watch list is the MCX. You can visit Sig Sauer's webpage here, Facebook here, and Instagram here. Of course, if you're going to be at SHOT Show next week, give them a visit at booth #12240