Home » Guns » Remington 700 CP Review: The Long and the Short of It

Remington 700 CP Review: The Long and the Short of It Imagine yourself in a world of restrictive firearms laws, global and stateside pandemonium, and a run on rifles, pistols, and ammunition all at once. Now, stop imagining this scenario and accept the fact that it’s occurring all across our country in 2020. Hopefully, you were prepared for something like this to play out and years ago procured the necessary items for your specific situation, based on your geographic location, or age, or state laws, or whatever reason you came up with. While we begrudgingly contend with the basic infractions of ill-informed laws, every once in a while something shines through the darkness, and this time it is the Remington 700 CP.

Now, let’s say you didn’t prepare or you never purchased that one rifle or pistol you wanted. Maybe you were one of the individuals buying one of 2.5-million firearms sold in the first quarter of 2020 with no sign of slowing two months into 2021. What firearm might you choose if you had to cross state lines, and traverse, say, the length of California for work or to visit a sick relative in New York? We’ve covered lever-action rifles in the past that could fit the bill — here’s a bolty that could also be just the ticket. 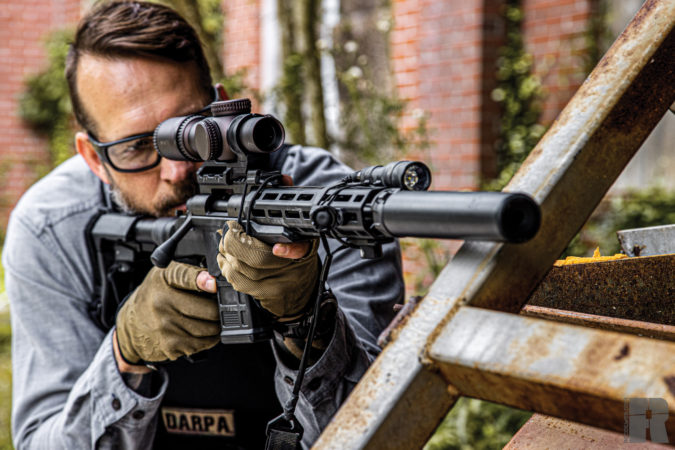 The Remington 700 CP is the latest iteration of Remington’s venerable and iconic bolt gun. The “CP” stands for Chassis Pistol, and it’s built on the classic 700 action that’s been around since Jesus was hanging doors for a living. The 700 CP is currently offered in 300 Blackout, .223 Remington, and .308 Winchester chamberings, but for our purposes, the 7.62 NATO was chosen, and here’s why.

During ammunition shortages, it’s always best to stay with a common caliber such as the .308, but not quite as common as 5.56 and 9mm — you can usually still find at least a couple of boxes of hunting ammo on the shelves at a gun store. In fact, despite Walmart yanking “assault weapon” ammo from their firearms department, they still carry .308 Winchester. We get it, it’s dumber than Joe Biden — please don’t tell them its metric designation. The .308 is one of the easiest cartridges to find in any state in the U.S. Should you want to load your own, it’s very forgiving. Data for the cartridge is so well studied that just a simple internet search will provide you every bit of information you’d need for the rest of your life. Finally, if the Marine Corps and the Army ever agreed on one thing, it’s the efficacy of the .308. (They don’t agree on its effective range, but hey, it proves the pros know what works at social distances.)

Why would someone at Remington green light this firearm, and, more importantly, why would someone choose it? Both are excellent questions to ask, and the answers are going to be somewhat difficult to swallow if you’re a traditionalist in the long-barrel rifle world. Why, you ask? Well, because the Remington 700 CP in .308 comes with a 12.5-inch barrel, and it’s technically a handgun. Yup, a 12.5-inch bolt-action pistol with a SBA3 pistol brace. The LAW Tactical folder mechanism adds 270 bucks to the tab, but pays off in terms of concealability.

I’ll allow you to lower your traditionalist blood pressure and reconstitute your thoughts on velocities and accuracy and MOA and whatever else triggers you in this time of murder hornets and the four horsemen (which sounds like an awesome death metal band).

Like Neo in The Matrix, I’m going to ask you to swallow the red pill or the blue pill now. Take the red pill, continue reading, and I’ll reveal the unpleasant truth, or take the blue pill and stay blissfully ignorant. Both are completely worthy options.

The red pill. A 12.5-inch .308 will do everything you need to accomplish in the United States. It’ll provide adequate self-defense, it’ll hunt in any situation in any state, it can be used for medium- to long-range shooting, and it can be used for accurate, low-cost plinking and recreation. Due to the fact that the “CP” is a pistol, it allows certain individuals in certain jurisdictions and states to own this firearm in this length where they may not be able to otherwise. Certain states may not allow a short-barreled rifle, or individuals might not wish to go through the BATFE process or wait times in order to own an SBR. This is a pistol, so that problem is solved. Some states have ammunition capacity laws, regulations or restrictions on “assault rifle” features, extended wait times on certain rifles and other laws that you or I may not be aware of due to living in free states. This isn’t an “assault weapon;” it’s a pistol. It’s a bolt-action, magazine-fed pistol, in a rifle caliber, but you get the point. Those problems are solved. We shot the R700 pistol from the bench in exactly this configuration.

Now the big red pill comment, and I should probably say this in a hushed, conspiratorial whisper. You don’t need a 20-, 18-, or 16-inch barreled .308 in order to hunt or make hits at extended ranges. Don’t believe me? Stick around for the shocking conclusion …

Before we get there, we need to kit this thing out. A few upgrades were in order. The pistol itself stayed completely stock, but we added some accessories to improve its effectiveness. First and foremost, the new Vortex Razor HD Gen III 1-10X24 optic (MRAD reticle) in a Scalarworks LEAP mount went on the rail. This makes for a pretty decent compromise between CQB/home-defense ranges on the 1x setting and a rapid transition to 10x magnification, allowing consistent hits out to 700 yards. Yes, you read that properly: 700-yard hits on an IPSC steel target that measured 12 inches wide by 24 inches long. To be fair, this is about the performance limit of this rig, as we were able to clock 1.5-1.8 MOA groups from the bench with our chosen ammo. We’d expect things to tighten up a bit if we had a real stock, rather than a brace. In order to maximize destruction at this distance, given that the bullet will have slowed from a pretty sedate muzzle velocity and be trundling along at around 1,300 fps, we chose Federal’s new Terminal Ascent, 175-grain ammo. The bullet employs a bonded construction and polymer tip as well as something their marketing department named AccuChannel groove technology. (And who the hell comes up with this sh*t?) Whatever they’re calling it, it makes for lower chamber pressures and maximum speed, but still allows long-range expansion at velocities that’d cause other bullets to pencil straight through. We haven’t tried it out on intermediate barriers yet but given the amount of solid copper wrapped around a small lead core, we have to believe that it’ll smash through sheet metal and auto glass like a skinny white kid at a BLM protest.

Finally, we added a SureFire 762 suppressor to assist in noise and flash mitigation. Yeah, we know, this kinda defeats the whole “travel through California thing,” but if you had the choice of shooting a 12.5-inch barreled 308 with or without a can, which would you choose? Thought so.

Other goodies included a Gen 3-M AR folding stock adapter from LAW Tactical, which allows the stock to fold, making this pistol easily concealable and portable either in a vehicle or on your back. We mounted a SureFire Scout light on the M-LOK rail and decided to go with the Unity Tactical hot button to save space and weight. The weapon light complements the scope when on 1 power and allows for rapid recognition of whatever it is you need recognition of in the dark. Rule 4 and all that. Finally, for stability, we attached a Javelin Pro Hunt carbon-fiber bipod from Spartan Precision Equipment. The magnetic-mounting feature allows the shooter to go from offhand shooting positions to prone or supported shooting in seconds and vice versa. These accessories changed the platform into a modern-day Scout rifle capable of addressing every possible scenario, from home defense to hunting — but without the ’80s aviators, trucker hat, and fishing vest. Time has moved on, and today’s low-power variable optics eliminate the need for the scout rifle’s hallmark, forward-mounted scope that maximized the shooter’s field of view. And the other ostensible reason for shoving glass out front on a scout rifle was to free up the action so you could top off the magazine with stripper clips. Detachable mags are a thing, so scratch that bit of nostalgia.

With the LAW Tactical folding adapter, this pistol is now a good option for a truck gun that takes up no space at all; it drops into most regular-sized backpacks for easy concealment, and the magnetic bipod attachment allows it to be ready for long-distance engagements in seconds. Imagine a fully configured, lightweight, modern-day scout rifle in a common caliber that can be used for any scenario you find yourself in — but manufactured as a pistol. We reckon this one’s a decent option for anyone who might want something handy, versatile, and not subject to the whims of anti-freedom state governments. The Remington 700 CP fits more than one niche, and has its place in the ecosphere, even one we didn't know we had.

One response to “Remington 700 CP Review: The Long and the Short of It”