It was close to a decade ago when FN released the first factory-produced, optics-ready, threaded-barrel pistol on the American market: the FNX Tactical chambered in .45ACP. FN saw the potential for optics-equipped-pistols, an idea that’s now completely permeated the market, well before the general public. Today, we’ll show you another pistol with multiple firsts from FN, the FN 502 Tactical: the first reciprocating slide-mounted optics-ready, rimfire pistol, complete with a threaded barrel, right out of the box. And oh yeah, you can probably use your existing FN 509 holsters for it too.

The FN 502 Tactical shares the exposed hammer and ambidextrous safety of the FNX Tactical, but the aesthetics clearly are a closer match to the FN 509T. It’s like they got together to make a subcaliber baby. Despite the close looks, the FN 502 is a completely new platform with very few parts interchanging with previous designs. The model we have on-hand is a preproduction prototype, so there may be some minor differences between what you see on a store shelf and what graces these pages. We’ll do our best to point out potential changes along the way.

Generally, we think of FN as a rather serious company that mainly focuses on the professional use of their weapons. Any servicemember who has spent time overseas in the last two decades has undoubtedly had some FN products protecting them. A subcaliber system that shares holsters and accessories with a full-power pistol practically screams “training gun,” but that wasn’t the only intention. In more recent years, we’ve seen some more consumer-driven products like the Edge series, and FN also sees the 502 Tactical as an approachable introduction to their brand and way of doing things.

For their very first rimfire weapon of any kind, FN teamed up with Umarex in Germany. Umarex is mostly known for their air guns (both pellet and airsoft), but they work with manufacturers such as Colt and HK to make functional .22LR copies of their full-strength brethren. But there’s more here than a Umarex design with an FN roll mark, as we’re assured FN was a part of the engineering process from the beginning. The FN 502 Tactical is a hammer-fired, single-action only .22LR pistol that’s a spiritual copy of the FN 509T. Of course, there are some material and design changes, .22LR being what it is. The heavy stainless steel of the slide is replaced by aluminum. Some other parts and controls that would traditionally be metal, such as the sights, are hardened polymer. In terms of size and weight, the FN 502T isn’t exactly like a 509T but close enough it feels like a “real” gun and fits into many existing 509 holsters.

We’re told the number-one goal of the FN 502 Tactical was to be as reliable as possible before anything else, and that’s something we test here for ourselves. 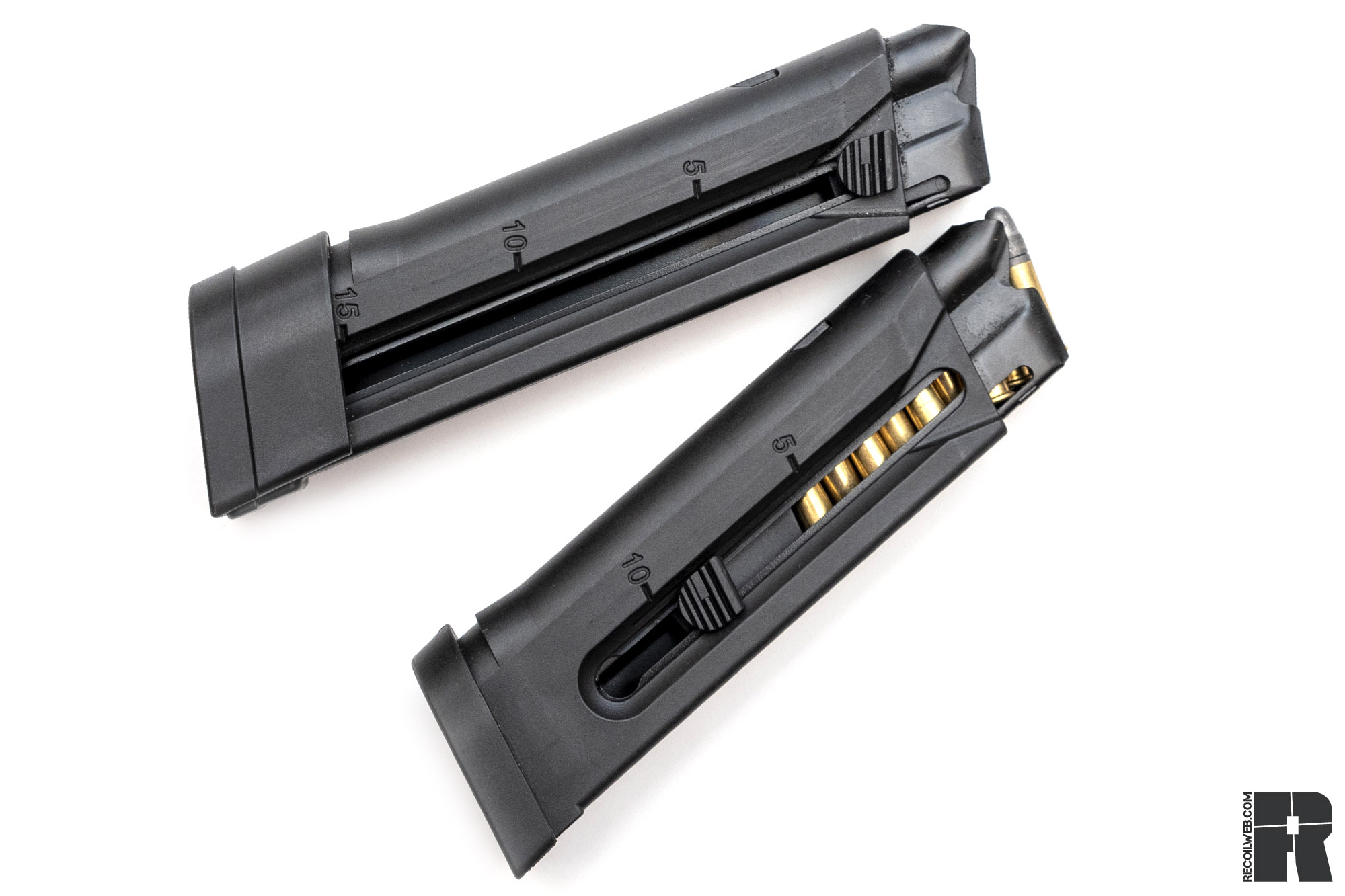 The FN 502 ships with a hard case. Inside is your choice of either a black or FDE pistol, two magazines (one flush-fit 10 rounder and a 15-round extended mag), the legally required cheap trigger lock, and several optic adapter plates with mounting hardware included.

The control layout of the FN 502 Tactical closely matches that of the 509. The magazine release and slide stops are truly ambidextrous. Though we’ve seen some FN 509’s with manual safeties, they’re not the norm and are relatively rare. Our example of the 502 features a low-profile, ambidextrous, frame-mounted safety. The safety can smoothly be swept off during pistol presentation, or you can simply ignore it.

Though it appears upon first inspection that the FN 502 Tactical rocks interchangeable backstraps like the 509, it’s just an aesthetic touch on the frame. If you need a fatter grip, you may end up with something like a Hogue Grip Sleeve. Disassembly is exactly what you’d expect, though that’s far from a safe bet when we’re discussing .22LR; there’s no weird hokey-pokey performance you have to perform to take it down, a la Ruger MkIII. Simply clear the pistol, pull the mag, lock the slide to the rear, and rotate the takedown pin clockwise. No trigger pulling required, which is good as dry-fire with rimfire is generally to be avoided. Our only real tip is to pay attention to the orientation and placement of the recoil spring assembly, or you won’t be able to reattach the slide.

We certainly didn’t expect an exact copy of the 509T plate system on the FN 502 Tactical, with .22LR being what it is. The mounting plates themselves are polymer to save weight, and you’re unlikely to knock everything too far out of whack with excessive recoil. Each adapter plate has a rear sight as part of the plate itself instead of featuring a separate dovetail on the slide. Instead of a single larger O-ring to keep the plate locked up tight on the 509T, the 502 has two much smaller O-rings for the same purpose. They’re small and look easy to misplace, so keep your eye out. The plates are snug enough that they snap on the bottom of the optic base and remain until you make an intentional effort to remove it.

Though all of the adapter plates are polymer, the base non-optic plate is formed from anodized aluminum and weighs 1.2 ounces — the exact same weight as the Trijicon RMR. This is because FN approached the 502 as an intentional optics-gun instead of adding parts and pieces later. Even without an optic, the slide is designed to carry extra weight on the rear for best reliability.

If you’re picking up a FN 502 Tactical to use as a subcaliber training pistol, ideally you outfit it the same as your carry/duty gun. But unless you’re going to war with it, you have more leeway with accessory selection, no hard requirement for bombproof accessories.

As the FN 502 Tactical ships ready for optics, a suppressor, and a light or laser, we decided to fill all of those holes. For an optic, we chose a Trijicon SRO with its expansive FOV and top-fill battery compartment. Unlike larger calibers, a suppressed .22LR is actually “Hollywood Quiet,” often even with supersonic ammunition. We tried a variety of silencers to get a feel but ended up landing on the new JK Armament JK 105LT MST. It’s a modular can so you can choose your own balance of suppression and portability; we found five baffles to be the Goldilocks here. Like previous JKA designs (see the RECOIL DIY book at gundigeststore.com), the JK 105 requires an approved ATF Form 1 to complete. Unlike the FN 502 Tactical, the JK 105 does betray its rimfire origins, having a diameter of a mere 1.05 inches.

A Steiner TOR Mini IR infrared laser was picked as a secondary sighting mechanism — if you’ve never gone out varmint-popping with a suppressed .22LR pistol and NODs, it’s exactly like cheating.

There’s a long-running joke that the folks from FN are incapable of color matching or coordination, given the hodgepodge of hues whenever they produce an item in FDE. And indeed, the slides of the 502 and 509 don’t match, and we didn’t expect them to. The FN 502 Tactical does share another common aspect with several FN guns; namely, a trigger that leaves much to be desired. The weight of the trigger isn’t the issue in this case: Our gauges clock the FN 502 Tactical as having a mere 2.5-pound pull. The break of the trigger is plastic-spongy with a ton of flex, and there’s a heap of overtravel and a long reset. If FN or Umarex doesn’t address the travel issue on the production models, we hope someone in the aftermarket does (looking at you, Apex Tactical).

ON THE RANGE & RELIABILITY

The illusion of the FN 502 Tactical being chambered in a more authoritative caliber dissipates as soon as you rack the lightweight aluminum slide or pull a trigger. If you’re not careful, you can end up hammerjacking the slide when chambering. Water is wet, and .22LR is dirty. You can nasty up a rimfire in short order, and suppressed? Twice as bad. Since FN was going for reliability, reliability we would test. The following ammunition was used:

We fully expected the FN 502 Tactical to run just fine with the hot loads like Federal Punch (see the article elsewhere in this issue for a review) and anticipated choking on some of the cheap stuff. Much to our astonishment, there were no feeding or extracting issues with any of the ammunition both suppressed and unsuppressed. Remington Subsonic ammunition would only lock the slide back suppressed, and Federal Auto Match failed to lock the slide back on empty regardless. That’s it.

The combination of a heavier-weight optic and the weakest of loads may give you some problems, physics being what it is.

All told, we cannot attest to the total reliability of production guns, and of course we only have a sample of one — but damn, this sample of one sure runs like hell. In fact, it runs so well we’re a little afraid to clean it, as to not knock off any of the magic soot and carbon. Needless to say, this will stay dirty (but lubricated!) until it starts gifting trouble.

Some will have to watch out for riding the slide or the slide stop. You can get away with some minor thumb/slide contact with a 9mm, but here we’re really lacking in ass so watch your grip. It felt great to hit the range without any worries about how much ammunition was being consumed; more than a thousand rounds went through the breach in just a few range sessions. While ammunition shortages persist, we’ve recently seen some signs that it may be lightening in some areas and .22LR remains the most inexpensive loading out there.

The FN 502 Tactical can be a great training companion, and not just for those running FN pistols. With out-of-the-box capabilities to run a reciprocating red dot with the size and weight of a full-size pistol, the FN 502 Tactical can be a trainer for virtually any duty pistol. It’d also serve well to train someone in the basics of pistol marksmanship, as all the manipulations are the same.

Most importantly it’s just fun as hell, and that’s all the excuse we ever need. More on Handguns, Pistols, and Optics