Several years ago, Gemtech, the well known Idaho-based suppressor manufacturer, was offering upgrades to their popular series of Outback suppressors. Unlike typical centerfire suppressors, lead fouling with .22lr can be extreme, and if you have a sealed can your cleaning options are limited.  Essentially they were taking the older sealed suppressors and modifying them to be user serviceable, as with the Outback IID. This program was suspended some time ago–but now it's back and better than ever. Last Friday Gemtech sent word out that they would be offering this program again. With a mea culpa, they're calling it the, ‘IOU' or ‘Improved Outback Upgrade'.
In the press release they state:

The IOU Program will update all Outback series suppressors – the original Outback, Outback-II, Outback-IID, and the Outback-IIT – as well as our Alpine suppressor to the NEW G-core baffle design. Because the tax stamp and registered serial number of each silencer is associated to the tube, we are able to upgrade the baffle system for the owner. This upgrade is also compatible with some competitor .22 suppressors. The new G-CORE™ gives the end-user a stronger and easier to maintain baffle system, and a longer life of the suppressor

As you can see, this time instead of simply allowing an older Outback to be disassembled, they're replacing all of the individual baffles with one of their G-CORE systems. In addition to now being user serviceable, the G-CORE promises increased performance, longevity, and caliber compatibility. Gemtech was gracious enough to allow me to have an early look at the IOU upgrade, so this isn't an announcement, this is a hands-on review.

I've had an Outback II for about half a decade. Though it started out extremely lightweight at a meager 2.5oz, years of use and abuse on .22lr guns of all sorts left it much heavier and not performing optimally. I have no idea how many rounds have been tossed through as I've never bothered to keep a logbook, and it's all been high volume. I can say it was bad enough that an engineer at Gemtech (who is used to seeing such things) said it was, and I quote, “completely fucking disgusting”

With the upgrade, the serialized tube is left intact, mars and scars and all, and the guts are completely removed and discarded. This is done in a newly environmentally sealed facility because, as you may imagine, a lot of lead gets into the air when you crank these babies open and strip out the old baffles.  What I received back looks like this: 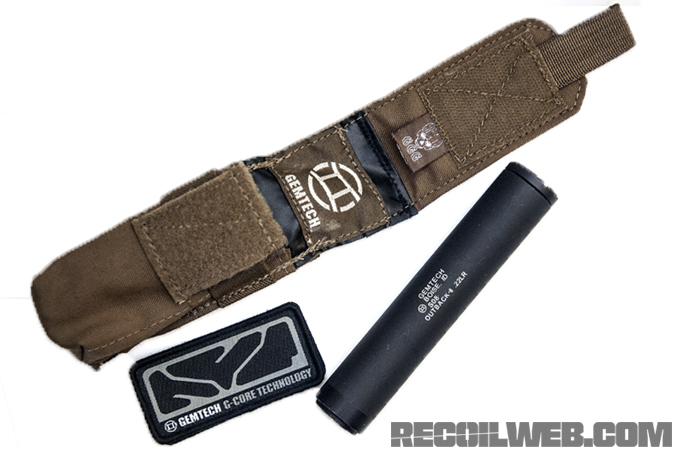 New box, new baffle stack, new suppressor pouch made by Grey Ghost Gear, specialty patch, target, and instruction manual for a GM-22. While the IOU upgrade isn't exactly like a GM-22, it's close enough that all of the same instructions apply. Have a look at the specs listed: 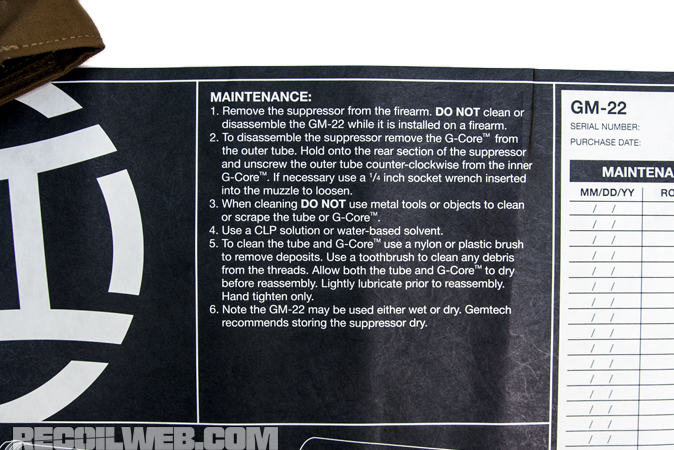 Yessir, four calibers listed, just like the Gemtech Alpine. I called up Gemtech and confirmed that indeed you can run .22lr, .22wmr, .17hmr, and .17m2 through the new G-CORE, while maintaining the same weight as the original Outback II. Depending on what can you send in, you may end up with something even lighter than you started with. I couldn't get a list of what competitor cans the IOU upgrade will work with, so you'll have to shoot Gemtech a phonecall or an email to find out.

To remove the G-CORE, you simply unscrew the end cap and everything pulls right out. In the event it seizes up, there is a provision for a wrench that won't damage your can. Cleaning is smooth and painless: brush it off, wipe it down, and put it back in. While there are OCD people that will do a full surgical scrubdown every time they expend five rounds, I am not one of them. A dirty suppressor works better than a clean one up to a point.

With the upgrade, you also have the added ability to run the suppressor wet (with .22lr only). The same standard advice applies: use water or ablative like wire pull gel and don't go nuts with it. Running wet, FRP (First Round Pop) was significantly reduced and the suppressor was incredibly quiet. Performance? I don't have a calibrated ear nor the extensive and expensive supplies to accurately measure dB levels (hint: your RadioShack dB meter or Youtube video comparison is insufficient to properly scope auditory signature). I will say that it's quieter than a standard Outback and even better when run wet. I mounted it on a couple of different pistols and rifles and it ran exactly like you'd expect: movie quiet.

Starting tomorrow, December 15th, you can send your own suppressor in for the upgrade. Even if you already have an Outback IID or Alpine it's something to consider–it's a complete no-brainer if you have an Outback or Outback II. Cost is $249 and estimated turnaround time is 3-6 weeks. Here's a short video they put together: