It's easy to love .22LR revolvers, especially single-action ones. With that in mind it should come as no surprise that when I heard about the Ruger Wrangler, I was excited. I’ve long loved the Ruger Single Six, which is basically the Ruger Wrangler's more polished and more expensive older brother, so I was itching to get my hands on a Wrangler and see how Ruger, did with something a little bit more budget-minded.

Ruger excels in manufacturing revolvers. Their GP-100 and SP01 series of revolvers have always been a byword for practical, dependable revolvers that, while not as smooth or polished as S&W or Colt wheelguns, they are just as rugged and reliable.

More recently, Ruger has carved a niche for themselves as the reigning ruler of the mid-range market, and have released a number of incredibly well-done, budget-minded products like the PC Carbine, the SR1911 pistol, and the Ruger American line of rifles and pistols. You also have products like the Ruger Precision rifle that changed the game of long range shooting, and sparked a revolution in affordable, chassis-style precision bolt actions.

So with all that in mind, I was so ready to get my hands on a Wrangler that I placed an order as soon as I could. With a street price under $200, how could I not?

And then came the second thoughts.

Like most of Ruger's budget guns, this one is cast… and from aluminum. The only steel of note is in the barrel and the cylinder. That’s not necessarily a bad thing, but it did leave cause for concern. Some poking around online revealed forum post after forum post about low-quality machining, fit and finish issues, and sloppy mechanicals. Not reassuring. The Wrangler has a cast frame, and you can see the mold lines here. But the internet hates anything new, and it especially hates anything new that sounds cheap. If it ain’t how Grandpa did it, it’s obviously wrong, right? There’s still a huge group of people out there that can’t stand the idea of a plastic striker-fired pistol, and will gleefully overlook Glock’s legendary reliability to call it Tupperware.

With this in mind, it's important that we evaluate the Wrangler based on what it is, and not on what our preconceived notions and biases might say that it is. And that means getting one in hand.

Overview of the Ruger Wrangler

The Ruger Wrangler is a single-action, six-shot revolver that’s more or less modeled after the iconic Ruger Single Six, which is itself modeled on a Colt Single Action Army. If comes in three different finish options, all Cerakote. Your choices are classic black, burnt bronze, and or matte silver. I’d love to see pink, purple, blue, green, and other ridiculously-colored ones, but I’ll take what I can get.

I appreciate colorful guns, especially plinkers and competition guns, so I like the variety available, and the use of Cerakote makes sense with the price point Ruger is aiming for here.

For your two crisp Benjamins plus tax, you get a steel 4 ⅝-inch cold hammer-forged barrel, a zinc alloy grip frame, a cast aluminum cylinder frame, an unfluted steel cylinder that has two decorative grooves behind the leads,  a transfer bar safety, and some plastic grips that are… fine. I’m not going to lie, they feel like you’re holding an airsoft gun. And not a good airsoft gun either. Think like the ones you could get at the county fair for $6 back when we trusted children more and adults worried less.

That said, they do feel solid, and are machined and fit well to the frame. The gun points naturally and the grips are well-checkered so the gun won’t bounce around in your hand under the intense recoil of .22 LR. The grip tapers nicely towards the hammer and flares comfortably towards the butt.

Overall, the gun is balanced well, if fairly barrel heavy, and light. This doesn’t exactly make the gun feel like it's high quality, but anything heavier would almost feel dishonest. Like those headphones from a certain Hip-Hop artist we all forgot about. The ones that have useless weights in them just to make them feel more expensive and higher-quality than they are.

The weight reduction in the Wrangler makes it a great option for a kit gun, something to keep handy in a glovebox, toolbox, or tackle box.

The sights are a simple milled groove to the rear, and an even simpler blade up front. The blade is fine enough for some fairly precise target shooting, without being so fine as to be difficult to use for quick shooting and casual plinking.

Well, in theory at least. To really evaluate the Wrangler, we have to take it to the range and see if Ruger has nailed the cheap-but-not-cheaply-made manufacturing on this, or if they’re just turning out gun-shaped objects that aren’t worth the money.

The Wrangler loads up just like the Single Action Army it’s based on, with a loading gate. The gate is stiff out of the box, but mine wore in fairly quickly over the course of the 500 or so rounds I’ve put through the gun. It’s still tight, but not “ow my finger” levels anymore.

The trigger is good enough. It’s one of the weaker points of the gun, not because it’s bad, but because it could be better. Single-action revolver triggers are easy to do well and this one feels heavier than it needs to be at 6.8 pounds. There’s also a good bit of creep before the break, which is disappointing.

For all that, the gun shoots well though. I don’t think I would take it over a Single Six, or a even a Heritage Rough Rider if I wanted to bring home a squirrel or rabbit for dinner, but for the plinking at empty cans and busting of clay pigeons that most people are likely to do with it, it’s more than adequate.

Inside of 10 yards, groups hovered around  two inches with everything I tested with the exception of Remington Thunderbolt and CCI Stinger which notably opened up to almost three inches. 40gr CCI Mini Mags, SK Match 40gr, Winchester Western 36gr, and Federal Automatch 40gr were the tightest, with SK Match coming out as the winner with a 1.2-inch group overall.

At 15 yards, groups opened up slightly, but the ammo performance remained the same. SK Match and Federal Automatch both came in around 2.5-inches. I feel like these groups could be tighter, but the trigger is holding the gun back.

I would have rather seen the gun in a 9-shot capacity as well, especially since there’s a loading gate and reloading is a fairly lengthy process for a plinker, but again this is a cost-saving measure. I’d also like to see a .22 WMR cylinder as well, which feels like a logical next step. 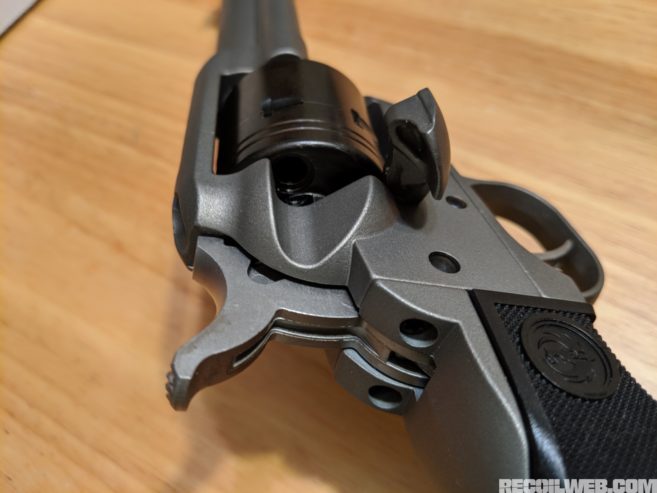 Affordable Plinker, or Cheap Knockoff of Ruger's Own Better Product?

Overall, I was ready to be disappointed by the Ruger Wrangler. And yet, I’m not.

It shoots well, especially for the price. It also functioned 100% reliably, and the only real issues with it are the low-grade finish, some mold lines on the cast frame, and a trigger that, while not bad, could be better. Are these deal breakers?

On something that costs $300 or more, I would say yes. On something that I picked up for $200, tax included? I don’t think so. This isn’t a self-defense gun, this isn’t a competition gun, this is a kit gun. A fun plinker. A cheap, but reliable companion to keep in your glovebox to dispatch squirrels, rabbits, snakes, and other pests. It's just as reliable as the Single Six, and at just a touch over 1/3rd of the price.

It’s light enough to live in a backpack with a hundred rounds if you’re going camping, and its accurate enough to blow holes in cans all day long. I've got to be pushing 750 rounds through the gun already and I've yet to have a single issue other than the occasional dud round from cheap bulk ammo packs.

Like small Rugers? Also check out the Ruger LC9-LM.

Incredi-BEARD and the Beard Rights Movement
San Diego County Gun Owners: Fighting For 2A
New CZ P-10M Single Stack 9mm & You Can't Have It
Daniel Defense and MWSF give away a home during Patriot Weekend