Finally! a Rifle the T-Rex Can Actually Shoulder

We travel nearly an hour across dry, dusty back roads in rural Idaho. Eventually we pull to a stop outside of a regular-looking steel building on a small family farm. There’s nothing exceptional going on — at least not until you step inside.

This is the Maxim Defense MukWerx facility, and its remoteness ensures no one will inadvertently come across what they’ve been working up. Inside, more than a dozen 3D printers are churning and buzzing away on new parts and prototypes.

The old mixes with the new; a weathered manual mill up front, with a CNC machine in the next room. A box of potatoes and another of onions in front of a large rapid prototyping machine belies the rural origins. 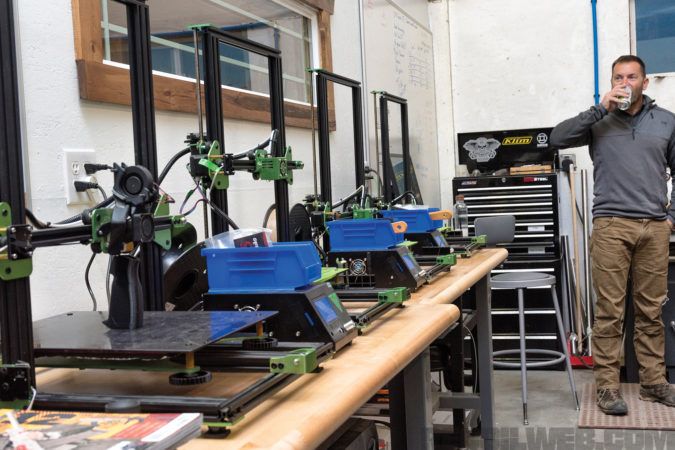 3D printers churning away. Iain may or may not be drinking beer. (He is.)

This is where Maxim Defense made their transition from a firearms parts company into a full-scale firearm manufacturer. It shouldn’t be a huge shock that Maxim Defense made this move. Remember, Magpul started by making rubber pull straps for magazines, SureFire started with bulky lasers, and Daniel Defense used to only make handguards. Insofar as the PDW-stock scene is concerned, what was once a crowded and competitive market has been largely dominated by Maxim Defense. Second place is now a long way away.

Of course, their first rifle falls directly inline with what we know about Maxim Defense: The PDX PDW; one short enough even the classically stubby armed T-Rex can finally use. Putting together a functional production PDW requires more than just slapjacking parts together from Brownells — at least if you want to make your mark. You need the right team, and someone else inadvertently gave Michael Windfeldt of Maxim the right ones. Timing is everything, and in this case Big Blue — Smith & Wesson, gave Maxim the opportunity. As S&W moved all major operations of Gemtech Suppressors to Massachusetts, employees that didn’t want to relocate across the country would be let go. And Maxim picked them up. One of the most memorable and remarkable names included among this new staff is Dr. Phil Dater. Tinkering with, and then full-on manufacturing silencers for more than five decades, you can find Dater’s DNA on many modern designs, and his fingerprints are all over the PDX.

No subcaliber carbine here, the Maxim PDX will be available in three calibers: 5.56, 300BLK, and somewhat of a surprise, 7.62×39. Making an AR that actually runs in 7.62×39 is a challenging endeavor; we’ve seen far more failures than successes. Triple-so when it’s in short-barreled format. And with a 5.5-inch barrel? Fuggedaboutit. It may sound funny, but this is absolutely a huge accomplishment for a mass-produced rifle. In fact, it’s for this reason that we decided on this steel-case eating commie cartridge stubby carbine to base our review on instead of more traditional calibers.

Firstly, bear in mind that we’re using some preproduction guns, so there’ll be some relatively minor changes between what graces these pages and what you buy in the store; we’ll point these out as we go along. Ours being preproduction or not, by the time you’re reading this you’ll be able to order a PDX from a distributor. The stock of the PDX appears very similar to Maxim’s traditional PDW stock options, but there are some significant deviations. Firstly, the upper receiver of the PDW is contoured to allow for a reduced width between the stock rods, and importantly, it brings the rods slightly higher, relative to the receiver itself. This allows for easier access to the safety selector while the stock is fully collapsed, one of our minor bitches about the legacy Maxim Defense PDW stock.

Additionally, instead of having to use a carbine tool or some sort of thread locker to secure the short receiver extension, a simple 3⁄8-inch ratchet is used to torque everything down via a convenient socket hole on the butt.

Along the same lines, the Hate Brake, a gas booster and linear compensator/flash hider can also be taken down and assembled with the same 3⁄8-inch ratchet. After watching very high-speed video and shooting the PDX for ourselves, even with particularly flashy ammunition, we can assure you that the Hate Brake does indeed work both at hiding flash and as a compensator. Admittedly the Hate Brake was far better in the 5.56 version of the PDX than the 7.62×39. Remember, at least half of flash produced has a direct correlation with ammunition selection — and of course, the only thing consistent about Russian ammunition is inconsistency. Unlike the lies you tell to potential partners, this one is indeed smaller than it looks.

The Hate Brake also pumps some gas pressure back into the system, something that’s important for functionality when we’re talking about such short weapons. The amount of gas flow back through the barrel is about equal to the average silencer. Pop off the Hate Brake, thread on a can, and you’ll more than likely be totally good to go. Also similar to some suppressors, you’ll experience some amount of free bore boost. We were surprised when we were told that 7.62×39 metered at 1,900 fps; this is roughly equal to the velocity we get from our 7.75-inch Mini Draco SBR. A 3⁄8-inch ratchet is all you need to crank this down.

If further tweaking is needed, there are still some options. Sure, you can play mucky muck with different buffer weights, but you don’t have to. Each PDX gas block has a threaded jet port inside it which allows one to custom tune their gas flow — it’s a lot like the gas plug used in SCARs, though it’s inside the gas block and not the barrel itself.

Short, suppressed guns are far more prone to gas port erosion than their full-size brethren, and the jet porting means you’ll get far more life out of a barrel before it starts overgassing like crazy. The jet ports can’t be swapped in five minutes in the field, but it’s specifically designed that way. If you can pull a gas block and rotate a wrench, you can swap out gas jet yourself. If you can’t, leave the damn thing alone.

Takedown is slightly different than normal, but nowhere near difficult.

While the preproduction models have receivers unmarked and unmarred by caliber markings, production guns will have the caliber deeply etched right on top of the forward assist.

Given the unique nature of this stubby shooter, it should be no surprise that nearly all of the PDX consists of proprietary parts — from the gas system length to the bolt carrier group to the buffer system. However, if you have an M16 lower or similar, any PDX upper will drop right on once you move the buttstock assembly over to your new host. Your favorite AR trigger will also work, though since the PDX ships with a Geissele SSA-E as standard, we doubt you’ll want to be playing with that anytime soon.

Something to keep in mind is that you can’t shotgun the Maxim Defense PDX open like a normal carbine due to the particular buffer/BCG combination. It’s not terribly hard though; just pop both takedown pins and pull the upper off from the front. Reassembly is exactly the same, but in reverse.

While the handguard of the PDX has integral sling quick-disconnect points, it’s also compatible with Maxim M-Rax accessories as well as M-Lok so you aren’t stuck to one location. Speaking of the handguards, you can use HK 416 compatible ones and vice-versa.

With the very first pull of the trigger, Iain belted out a hearty laugh and was wearing a big smile. My first reaction was a mix of goosebumps and exclaiming, “Holy sh*t!”

It’s not everyday shooting a new firearm can elicit that reaction from us. There’s some kind of black magic voodoo going on here, of that we’re sure. The felt recoil of these tiny barrels was less than that of our other, much longer SBRs. Popping plates at various ranges was effortless. Formal accuracy testing will take place once we get production models in-hand, but we’re pretty sure they’ll be more than simply functional. Plugging data into our ballistic calculators, using plain-old Wolf 124-grain FMJ zeroed at 100 yards the drop at 200 yards was just around 10.5 inches, but it definitely drops precipitously from there. A precision rifle this ain’t, but you can reach out further if you know your holds. So far as what a PDW should be capable of — this one is no slouch. If you want to get more into the nitty gritty of the ideal zero, see our article in Issue 35, “No True Zero.”

This just the first taste of what’s to come from Maxim Defense. While the 5.5-inch PDX is the premiere rifle, by the time this article hits print these will be available in both 8.5-inch and 10.3-inch configurations. This is merely the start of the Maxim Defense MDX Battle Rifle System.

But it’s not just about barrel length. If you don’t want a Hate Brake you can roll with something more integral: the Maxim Defense Heartbreaker silencer.

All in all, if you’re looking at multiple calibers and configurations from Maxim Defense MDX Battle Rifle System, it probably exists. Let’s break them all down here (and there’s more than you thought)!
– Pick your caliber (7.62×29, 5.56 NATO, 300BLK)
– Barrel length (5.5, 8.5, 10.3 inches)
– Handguard
– Silencer or Brake (Hate Brake or HeartBreaker Silencer)

This all adds up to more options than we’re willing to kick out in this article — and more options is more better for consumers. More on the Maxim Defense PDX