Saint-Étienne Museum of Science and Industry

Last year marked the fifth consecutive year I’ve visited France, but this time, the mood was markedly different. Terrorist attacks had changed both the topics and the nature of civil discourse, and there was a dramatic increase in physical security around all public events. It was noticeable as soon as I stepped off the plane.

In years past, you’d see pairs of uniformed soldiers of various noncombat arms strolling around Charles de Gaulle Airport in Paris looking bored, checking out the young women, and trying to feign interest in a largely symbolic duty. In contrast, last summer I saw squads of jocked-up infantry veterans deployed to even second-string airports, where they were actually patrolling and even — horror of horrors — had magazines in their weapons. 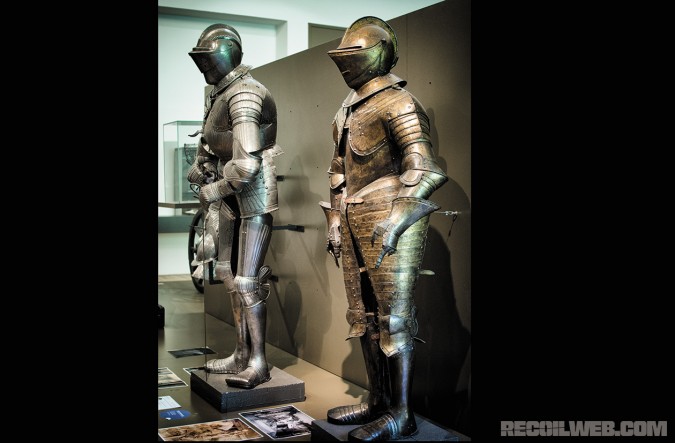 Seventeenth century armor from both France and Germany is on display. Much of the museum’s Medieval collection is in the open, outside of glass cases.

The rifle they carried was the FAMAS, the iconic “Bugle” and the last service weapon to be produced in a nation that at one time led the world in firearms innovation. In 2016, France was in the process of selecting a replacement, which would come from either Belgium, on whose soil hundreds of thousands of French servicemen died, or from Germany, whose conscripts faced them across artillery-scarred mud and from behind the sights of K98 Mausers. France wound up choosing the HK version of America’s service rifle. But hey, we’re all Europeans now …. It seemed appropriate, therefore, to visit the city in which France produced the millions of rifles, bayonets, machine guns, and pistols needed to equip their armed forces, who just 100 years ago were locked in a bloody, existential battle for their nation’s survival. The factory where thousands of workers toiled in a desperate race to put weapons in the hands of those who were battling the Teutonic hordes had been shuttered and bulldozed in the 2000s, but their remarkable product line had been placed behind glass for visitors to gawk at. French cuisine is rightly famous worldwide. A couple of meat tenderizers illustrate why.

Saint-Étienne was, during the latter part of the Industrial Revolution, one of the most important manufacturing centers in Europe, producing textiles, machine tools, bicycles, and farm equipment, but its history as an arms maker dates to the Middle Ages. Swords and armor were manufactured for French kings and emperors to equip their armies, and as edged weapons transitioned to powder, the musket of 1777 became the most prolific firearm ever produced until the advent of WWI. Gallic Buntline Special. Revolving carbines were developed around the same time on both sides of the Atlantic.

Over 7 million examples were made (though not all by Saint-Étienne), and troops so equipped faced off against those armed with the Brown Bess in Europe and Asia. French firearms featured prominently in the early days of American history too. Although the famed Charleville musket of the Revolutionary War was named after the eponymous state arsenal in the Ardennes, many were produced in Saint-Étienne and made their way across the Atlantic. Later, in the Civil War, France supplied cannons, Minie rifles, pistols, submarines, and ironclads to both sides. Pair of presentation pistols from the workshop of maître Nicholas Boutet While the history of French firearms development in Saint-Étienne could easily fill its own building, the collection shares space with other notable local trades and is housed almost entirely on the upper floor of the Musee d’Science et Industrie. The building itself is reached by crossing a small town square that’s quintessentially French; while we were there, the weekly market was well underway and townsfolk were stocking up on locally grown produce, meat, and cheese. Climbing a few limestone steps to the entrance, the ballistic pilgrim enters the usual foyer-slash-gift-shop, ponies up their entrance fee, and then climbs the stairs past displays of glass and lace. An 1873 Chamelot-Delvigne cutaway next to its replacement, the Model of 1887.

Examples of medieval armor, swords, and halberds greet the museum’s visitors as they enter the third floor space of the Museum of Science and Industry. Inside, displays cover both combat and jousting, with examples of both highly decorated plate armor and mail in evidence, along with the lances and shields every well-equipped nobleman needed in order to win the heart of a fair maiden.

The period where armor was being supplanted due to the ability of commoners to punch big frickin’ holes in it with their comparatively cheap matchlocks overlaps the birth of several of the most notable area workshops. Locks from this time are displayed in wall-mounted cases and some are quite stunning in both design and execution. The earliest service firearms on display are a pair of wheel-lock cavalry pistols dating from 1550, while a suit of Maximilian armor dates all the way back to 1415.

Although Alexandre Dumas’ characters were fictitious, his father was an honest-to-God general in the French revolutionary wars, and there really were two companies of Musketeers who served as the king’s bodyguard. The only remaining example of a Musketeer pistol is on display in the MSI, along with corresponding Mousquetons, or cavalry carbines.

At around the same time, an enterprising gunsmith by the name of Nicholas Boutet was hiring the best artisans he could find to produce what could be fairly considered some of the finest guns the world has ever seen. As arquebusier, or gunsmith to the court of Louis XVI, he was given free reign to create extraordinary works of art, such as the pair of cased pistols shown here. As the industrial age progressed, cartridge arms replaced flintlocks in a process familiar to amateur historians on both sides of the pond. Production became both codified and centralized, with Saint-Étienne’s place as a strategic asset to the French Empire cemented in place with every one of the bricks laid to enclose the new factory. Revolvers from the 1870s are showcased and demonstrate just how advanced their designs were in comparison to contemporaries on the world stage.

While we were taming the west with Colt single-actions, the French were fielding their first sophisticated D/A revolver, which for a military pistol was exquisitely made (in the officer’s variant anyway — rank has its privileges). The 11mm 1873 Chamelot-Delvigne was made until 1886 and continued in service until well into the Second World War. Civilian versions were widely distributed, with Belgian copies hitting the market soon after the military adopted the pistol; we encountered examples of both at a local flea market, where, due to being over 100 years old with no currently manufactured ammunition, they’re freely traded. Case showing the progressive development of the French service revolver. They were replaced in general service in 1935 by the forerunner to the SIG P210.

The MSI has numerous, well-preserved samples of drop-dead gorgeous French sporting arms from the golden age of gun making, but it’s the oddballs and one-offs that are particularly eye-catching. Such as the carbide-powered rifles and the high-powered airguns, along with early semi-auto shotguns that show a level of development that surpass their American counterparts. This is, after all, the country that was the first to field a self-loading service rifle, over 20 years before the Garand stepped onto the stage.

As visitors make their way past case after case of well-preserved and displayed products of the gunmakers’ craft, they eventually fetch up at the usual Euro-bullshit display of modern art, the message being, of course, that guns are bad m’kay? It’s ironic then that the last exhibit before having to suffer the artists’ smug self-righteousness is of the final products of the Saint-Étienne factory, which is, of course, where our story started. We can only hope that the gamble of neglecting and then destroying the remnants of their domestic arms industry doesn’t come back to bite them. History’s a bitch, ain’t it?

The Battle of Mons, or What a Handful of Badasses Can Do With a Bolt Gun
A proper shootout
Weekly Deals From Around the Industry
Tactical Tailor's Low Profile SBR Bag