Right from the beginning when the SCAR was released, the relatively short length of the handguard was a common complaint. In response to market demands, such companies as Vltor, KDG, FNH, PWS, Midwest Industries, Handl Defense, and more produced extended forends. While the merits of each extension available can be argued, if you're running a factory 16″ barrel you have a lot of options for additional real estate. Fewer alternatives are available for SCAR CQC owners, though Vltor and Handl both have a handguard solution.

To be sure, when equipped with a 10″ barrel that standard handguard appears more at home, but a couple inches can still be squeezed out beyond the gas block. 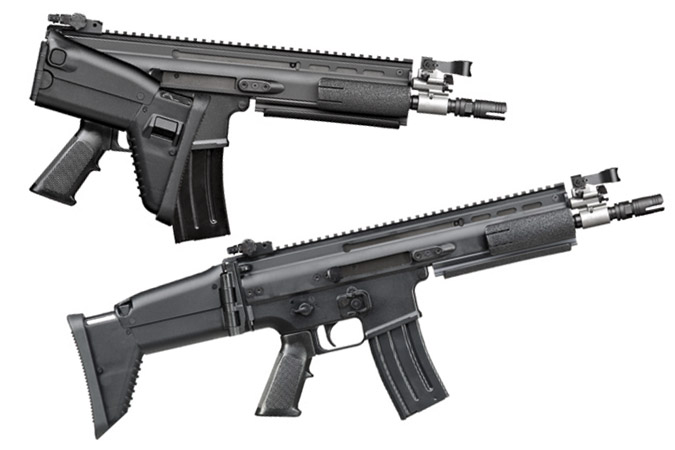 It may not sound like a lot, that two inches is also the difference between a carbine and a mid-length AR-15 handguard. A company called Branham Tactical manufactured (manufactures?) a 2″ railed extension but availability was always spotty at best. Being a short barreled SCAR owner, I ended up doing the same thing that many others did: I simply chopped down a longer rail extension to fit. I used a PWS SRX and a bandsaw. While definitely not perfect, but firmly in the “usable and good enough” camp. Very recently I feasted my eyes on a new product from Parker Mountain Machine (PMM) and knew I would have to give it a shot. PMM has been in the business of making small parts and upgrades for the FN SCAR since 2012; QD sling mounts, safety selectors, magazine release buttons, replacement rails and the like.

It's called the MRE. Though the name may be repulsive, conjuring up memories of Country Captain Chicken and the Four Fingers of Death, it actually stands for “MLOK Rail Extension” which is decidedly more palatable. The MRE is a 2″ handguard extension that weighs under 2oz (1.9oz) and is compatible with Magpul MLOK accessories. Parker Mountain Machine also produces a KeyMod version named the KRE which is even lighter at 1.6oz.

PMM specifically designed these extensions to marry up with their other in-house side and lower rail replacements. I rolled with this advice. It should be noted that when determining the ideal length of the MRE and KRE, Parker Mountain Machine performed testing with a myriad of different silencers and their corresponding mounts. Per PMM, all suppressors that use a flat faced shoulder should clear the MRE/KRE when mounted on a 10″ factory CQC barrel . I couldn't test this for myself, as I had my barrel chopped to 10.5″ instead of the OEM 10″.

If you're familiar with replacement and installation of factory SCAR side and lower rails you'll find this one no different. For those unfamiliar, I recommend watching the first four minutes of this video to strip everything down. You'll need a torx driver and T25 bit, heat gun, 2.5mm hex key (included), and thread locker (included). If you want to do it right you'll also have a calibrated torque wrench for reinstalling the barrel.

With the MRE installed, the barrel can still be removed in the usual fashion, a feature that some other aftermarket SCAR handguards don't allow. The PMM side rails also retain the barrel screws just like the OEM side rails. Playing matchy-matchy with rails really isn't a requirement–you can get as weird as you want. KeyMod side rails and an MLOK extension? Sure. Picatinny lower rail, MLOK siderails, and a KeyMod extension? I guess but the Picatinny is a different height. In more practical terms this means that you don't have to eat all the money in one sitting; you can buy the extension now and the rails later or vice versa. One major plus to using all of the same components, aside from a more seamless look and ease of accessory placement, is simply that the Parker Mountain Machine side rail replacements have a much lower profile. The wide-bodied SCAR gets considerable slimmer. Check out the front view below, with the PMM rails overlaid in red: After I was finished I simply outfitted the rifle with MLOK accessories instead of Picatinny ones. The rails are a nice upgrade but the extension is definitely worth the price of admission. The rails and extensions are available in both black and FDE, and of course beauty is always just a rattle can away if you prefer another hue. In the future I'll look forward to checking out more from Parker Mountain Machine.