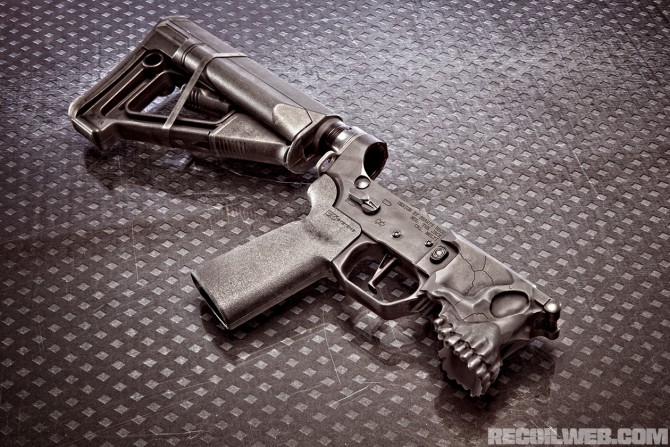 Sharps Bros: Taking Firearms Design Into the Next Century

You wouldn’t expect to find inspiration at the bottom of a lake, but that’s where part of an important seed was planted in John Sharps’ mind —  the seed of an idea bout bringing firearms evolution to the next level. As an avid technical diver, John was on a dive in Lake Washington when it happened. Lake Washington is known to be a treasure trove of many downed WW2 aircraft and sunken vessels; in it he was able to find a well-preserved TBF-1 avenger and Corsair, among others that remained deep below the surface. On a family trip to the Museum of Flight in Seattle to show his boys what the Corsair looked like in person, John passed by a P40 Warhawk on display and remarked to his wife how cool the flying tiger design on the nose would look on a lower receiver. With a background in manufacturing and product development, as well as being a lifetime shooter, that idea didn’t remain idle for long.

During the two years of development before John had the first design in hand for the P40-inspired “Hellbreaker” lower, a rendering on an AR-15 forum got a lot of buzz going. “Some people loved it, some hated it, but everyone was talking about it,” says Sharps. People have been adorning their weapons since the dawn of mankind. It’s a way of making a weapon your own.” That inspired John to go a step further and reach out to companies he admired like Seekins Precision, Noveske, and others who he thought could manufacture the Hellbreaker. Although none of these companies were able to help John take it to market, it became a blessing in disguise to take it to market himself.

After four years in business, Sharps Bros shows no signs of slowing down. Their Hellbreaker helped lead to other popular designs like the Meanstreak and Warthog. With the introduction of their most popular model, the Jack, a design requiring over 3-million lines of individually written CNC code, Sharps Bros is poised to continue their evolvement into other areas. They’ve added AR-10 sets to their lineup, with precision uppers being another area of potential expansion.

And if you’ve ever wanted to bring your AK into the modern age, now’s your chance. Sharps Bros is now branching out into AK receivers in a partnership with AK guru Jim Fuller of Rifle Dynamics as the exclusive distributor. The MB47 milled receiver, made from 4140 steel promises to be the foundation that’ll surely breathe new life and potential into the AK platform. Read more about Rifle Dynamics here and check out the receiver right here. AR receiver sets are machined from solid blocks of 7075-T6 aluminum and anodized black, and Spike’s Tactical is the exclusive distributor for their AR products.

“Spike’s believed in us in the very early days of the company, and I will always be grateful of that, they are a great bunch of people.” “Every one of our products fits the phrase, ‘Exceptional designs and exceptional craftsmanship.’ That is our mission and right now we are doing world class work — and when we get comments thanking us for the creativity and praising the quality of our work, many of which are from machinists by trade, it’s very motivating,” Sharps says.