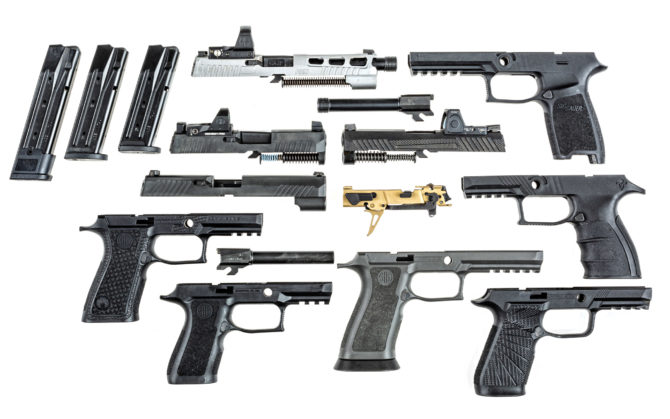 It’s a great time to own a SIG Sauer P320. The handheld Juggernaut came out of nowhere in 2014 and slowly mounted a strong challenge to the market-leading polymer pistols. With the Army’s adoption of the platform in 2017, the P320 is poised to become America’s favorite pistol.

And this is before the recent news of SIG’s latest effort to position the P320 as the answer to every question that starts with, “Which pistol should I get for [insert intended pistol role]?” This effort is twofold. The first is a new initiative; the second is the strengthening of another. 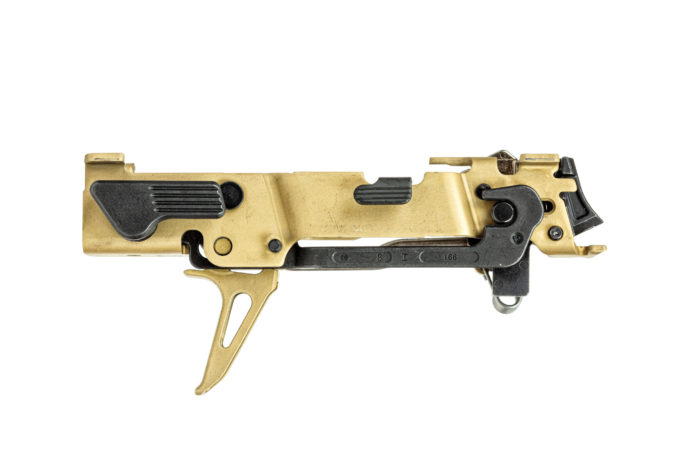 This is what 300 bucks gets you: The gateway drug to parts-swapping addiction.

The first prong of SIG’s market-changing game is the release of the P320 fire control unit as a standalone product. This is the guts of a P320 containing the serial number, trigger, sear, safeties, slide rails, and the rest of the stuff that makes a P320 a firearm. Drop the SIG P320 FCU into any 9mm, .40, or 357 SIG P320 grip module, attach a slide, and insert a mag, and you’re in business. SIG’s plan is for regular Joes to walk into the gun shop, buy a Custom Works SIG P320 FCU for $299, and thus begin a choose-your-own-adventure custom pistol building experience. Once the background check is passed, natch, guys can choose to outfit the pistol in three ways. First, using the dealer’s in-stock parts. Second, pointing and clicking on a SIG Custom Works P320 Studio kiosk to order parts that’ll arrive at the customer’s home within (hopefully) days. Thirdly, guys might just head home, strip to their boxers, and hop on the web. The P320 Studio is available on the web with the same in-store functionality that offers a graphical interface showing the gun taking shape as parts are added … and it’s smart enough to throw a flag when things aren’t going to fit or function. Initially, builders will choose from an array of SIG’s factory parts, while SIG plans to offer a curated collection of aftermarket parts shortly after. Which brings us to the second prong of SIG’s P320 FCU plan. SIG recognizes the commercial success of a gun is linked to the aftermarket’s willingness to support it. Accordingly, the company is sharing technical drawings and information with carefully chosen companies to spur the growth of well-fitting and functioning P320 parts. These companies are called the P320 Collective. 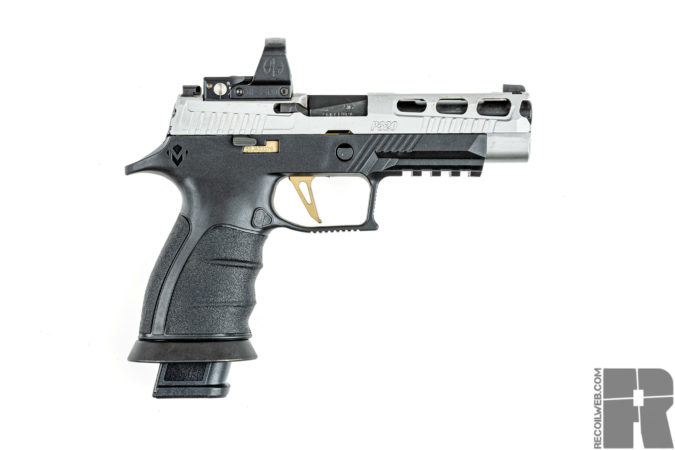 The evolution of mild to wild. Original P320 grip frame and top end morphs into something completely different with just the addition of cash.

My own P320 is one of the first thousand off the line. It’s not a favorite. It came from the factory in 2014 with a pot-bellied grip and trigger that slapped like Wyatt Earp in Tombstone. With about 3,400 rounds through it, it’s been accurate and reliable. But even after replacing the original trigger with the adverse trigger years ago, the gun was never fun to shoot, and always a little too chunky for me to carry.

Much later, in mid 2020, I got an opportunity to get reacquainted with the platform by building a gun around a prototype Custom Works SIG P320 FCU. I figured the best way to see what kind of performance the platform was capable of meant a competition build was in order.

Holy crap. I had no idea how much SIG’s incremental updates and the 2017 voluntary upgrade changed the personality of the platform over the years. The Custom Works SIG P320 FCU, with its XSeries trigger is a smooth, slapless treat, and the XSeries grips are a heaping ergonomic improvement over the old, P250-era grip modules. I wanted to experience the recoil-absorbing qualities I’d heard about in SIG’s XSeries tungsten-infused grip module. With an extra internal weight and mag funnel, the TXG grip weighs 15.2 ounces. The original P320 3.2-ounce grip feels like a toy compared to this thing. The stock mag release is fine, but my stubby thumbs requested a slightly longer, but more sculpted Wilson Combat mag release. It’s just not a huge paddle, but it’s enough to put the control where I can hit it without reaching.

SIG’s factory Pro-Cut slide was an easy choice. The slide holes look cool, and I’m not worried about dust and dirt getting into the action on a competition gun. Plus, it comes with XRay3 sights, and Leupold’s Deltapoint Pro MRDS drops on without the need for an adapter plate. Sold. Newer slides accommodate both the DPP and Trijicon MRDS footprints, as well as SIG’s own red dots.

Early Pro-Cut slides only had a single set of holes in SIG’s Romeo1 Pro/DDP pattern, but slides produced from the summer of 2020 onward have two additional holes, making the slide compatible with Trijicon’s RMR, too. Just be aware, SIG threaded the RMR holes for 6-40 screws instead of the more widely used 6-32 screws.

SIG’s pistol guru Phil Strader explains this was done to meet a contract requirement, “We had a government contract for direct slide mounting for the RMR and the Deltapoint Pro, and we tried using the 6-32 screws that come with the RMR, but we couldn’t get through the 20,000 rounds of required testing without the sights coming off.”

Because the mounting holes for both optics are so close together, the only way to make that setup work meant switching to 6-40 screws. Strader says he’s working with Trijicon on a kit that’ll include 6-40 screws and an RMR sealing plate that’ll be available as an accessory.

I went with a Grey Ghost Precision threaded barrel, thinking the threads will accommodate a compensator down the road. The Pro-Cut slide includes all the internals except for a recoil spring, so I stuck a Grayguns, 1911-style recoil spring setup in there with a 14-pound spring. The gun ran fine on a diet of 115-grain and 147-grain 9mm with that spring.

The combination of the competition trigger, added weight, and red dot make this thing a plate rack mercenary. I’m no split king, but swinging this thing in front of a half-dozen plates feels like I’m using a magic wand to knock the plates down. Shooting silhouettes on the move was a similarly fun experience.

Because I could, I pulled the gold trigger from the SIG P320 FCU and replaced it with Grayguns Hybrid Competition Kit that includes an adjustable overtravel trigger, an optimized sear, sear springs, and a polished safety lever pin. The Grayguns adjustable trigger has a large flag and flange around the trigger bar axle that’s necessary to balance the trigger. The flag prevents the trigger bar from rotating into a position where it can be snapped in with the trigger bar spring installed, which is the way most people deal with that spring. You might be tempted to grind the flange down so the trigger can rotate into position for easy installation. Don’t. Instead, head to Grayguns and look for a newly posted instructional video that’ll make working with the restricted rotation of the trigger and trigger bar just as easy as the old, snap-in method. With a growing number of aftermarket triggers available, you’ll probably find one that meets your needs. Note: Grey Guns stainless guide rod — an easy way to add an ounce to the front of the gun for more stability.

See the chart for the trigger weight comparison and notice I also added Apex Tactical’s Forward Set Trigger Bar to the mix of four trigger setups I tried. In order of preference, the standard XSeries straight trigger was a good starting point. Smooth and solid, but noticeably heavy for a competition gun, the Custom Works FCU trigger was lighter and just as clean without creep. The Grayguns kit lightened things more and gave a great rolling break, but a longer stroke, even after adjusting overtravel. Adding the Apex trigger bar and readjusting the overtravel eliminated take-up, and left a light rolling break that’s excellent for the range, but might be too sporty for some to carry. We must also point out neither Grayguns, Apex, SIG, nor I have tested this configuration for safe, reliable operation. I ran it for about 800 rounds without issue, but I didn’t throw the gun on the ground. So, we recommend using the stock trigger bar with Grayguns’ trigger for safety sake.

With the range toy build done and won, it was time to play the modularity card. With a tool-free parts changeover, the P320 comp was ready to get shoved in my pants. With the slide off the gun, a tug on the takedown lever allows the SIG P320 FCU to slide out of the TXG grip module. I slipped it into a Wilson Combat Carry grip module and slid Grey Ghost Precision’s compact slide and barrel on there.

I wanted to drop SIG’s Romeo1 Pro optic on the slide but ran into a gotcha when I realized the Wilson Combat VTAC rear sight overhung the optic cutout by a few thousands. This blocked the optic and would’ve required me to file the leading sight edge to make the slide, sight, and optic work together. Instead, I grabbed an RMR and the included shim plate, which located the optic forward enough to clear the back of the sight. Problem solved. The Wilson grip is far different than any other P320 grip on the market. It’s narrower and thinner than most, and for a guy with average-to-slightly-undersized hands, the grip instantly felt like home. The rougher-than-average front and backstrap add more control without chewing up my hands. Then, add the positive gripping surface provided by GGP’s slide serrations and texturing, and a single P320 just went from my new favorite gaming gun to my new favorite compact carry.

While I missed the larger, distortion-free window of the Romeo1 Pro, the RMR is a sturdy, combat-proven sight that has a little less bloom at higher brightness levels and is a little slimmer, which makes it a hair more comfortable for AIWB. It’s worth pointing out that I must have swapped the FCU between a few grip modules scores of times while working on this story, and I didn’t notice the FCU fit loosening. That means, using one SIG P320 FCU for a competition, concealed carry, and maybe even a duty gun is a possibility with the P320.

SIG’s Custom Works FCU combined with parts from the initial slate of P320 Collective members turned one fun gun into two for me in a matter of seconds and with only one tool — that being my credit card. After dropping a measly $300 on the FCU, I was shocked at how quickly the cost of the configurations I built added up. But, damn if these guns …  er, this gun, isn’t a blast to shoot. Heck, if I could ever cure my wandering eye and settle down with just one pistol, the crazy-modular P320 just might be The One for me.