Every year SIG's product lines grow causing their already impressive booth to grow to tie Vista Outdoor for the largest on the floor. The upside to the huge booth is they have just about every product they make on display for show-goers to look at and touch. There is an obvious downside to the giant booth, some of the unreleased gems get overlooked.

Before we show you the hidden treasure, let's go over the new P320 XCompact. We are told that the Sub-Compact P320 has been discontinued and the new 3.6-inch barreled slide will be the new super short option in the SIG P320 line. SIG also appears to be slowly phasing out the use of the original P320 grip on newly introduced models, instead favoring the X Series grip. The magazine capacity of the XCompact is 15-rounds of 9mm. We were not made aware of any calibers being added beyond 9mm. Probably the most interesting feature of the slide is the optics cut. While past optics ready pistols have been limited to the Romeo 1, the XCompact sports the new Romeo 1 PRO cut that is compatible with the new Romeo 1 Pro, upcoming Romeo 2, and the well proven Leupold DeltaPoint Pro. The front sight is one of SIG's excellent Xray3 night sights paired with an all black SIGLITE rear sight plate that has two tritium vials tucked into the rear sight. We took the gun apart and noticed that in addition to the flat X Series trigger, the internals look identical to other pistols in the line. You still get that great trigger feel with positive reset and the modular chassis giving you the ability to configure the pistol for just about any mission or role you have. The SIG Sauer XCompact is currently shipping to dealers. Check out the SIG website for more information.

Here Is What You Missed:

You know that Romeo 1 Pro and Romeo 2 we mentioned? SIG had quietly displayed some examples of the coming pistol optics in some display cubes in an easily overlooked area of their booth.

We spoke to SIG's Pistol Product Manager, Phil Strader, about the new optics and were told that the old Romeo 1 slide cut was being phased out in favor of the new DeltaPoint Pro cut that will accommodate the two new optics on display.

Since they haven't been officially released Strader didn't have any specs on hand but did let us get behind the glass and take some close up photos.

First up is the Romeo 2, a ruggedized version of the Romeo 1 Pro. We suspect that SIG is developing this MRDS to directly compete with the Trijicon RMR HRS and DeltaPoint Pro in government contracts. Interestingly, the Romeo 2 had some sights built into the rear of the MRDS body that had white dots but were non-adjustable. They appear to be intended to be used with suppressor height sights which explains the taller front sight on the display pistol. The super beefy hood reminds us quite a lot of the DeltaPoint Pro and should provide a ton of protection for the window. The Romeo 1 Pro looks to be an upgrade over the older Romeo 1 optic and appears to address a couple of common complaints about the older design.

We have seen consumers complain that the rear notch on the current Romeo 1 isn't rear sight like enough and they were unhappy that they couldn't use a more traditional back up rear sight. The new Romeo 1 Pro appears to add a large rear sight to the body of the dot. 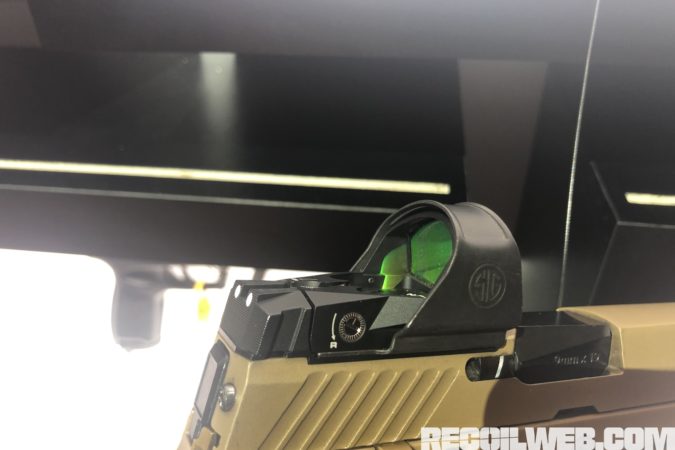 Another complaint often heard about the original Romeo 1 is that the frame around the window isn't robust enough. People like Aaron Cowan of Sage Dynamics have shown in testing that the window of the optic can shatter when dropped or take an impact to the hood of the optic body. It appears that this part has also been beefed up but not quite to the extent that the Romeo 2's body has been ruggedized. Learn more about SIG Sauer on the SIG Sauer website.