Last year, we built a 410-gauge shotgun from a kit and a lot of pipe fittings for our sister magazine RECOIL OFFGRID. One thing about building that particular piece was that even the parts kit that was provided by Pop-A-410 could easily be sourced at a home improvement store. So this time, we set about building one relying purely on Home Depot’s inventory to build a Slam Fire Shotgun.

It’s legal for you to build your own firearms. Convicted felons or other prohibited persons, however, cannot. There may also be other applicable laws where you live, so double-check the regulations in your jurisdiction. The following article is for educational and entertainment purposes only. CMG West, its parent entities, and subsidiaries shall be held harmless in the event any entity acts on information provided in this article.

Some people who consider the firearm lifestyle a mere hobby couldn’t get over themselves decrying how dangerous and irresponsible these types of builds are for a shooter. There are inherent risks at every turn when it comes to firearms, and like anything with a modicum of danger, they’re unforgiving of human error. Construction is simple, using four pieces of pipe, two pipe caps, two tees, two set screws and some scrap pieces of steel. The only element of complexity is in lining up the welds properly to ensure consistent ignition.

With that in mind, we set out to build a slam fire shotgun in 12-gauge.

It’s legal for gun owners to build their own firearms, so long as they can legally own and possess what they’re building — convicted felons or other prohibited persons cannot. There may be additional restrictions where you live, so be sure to double check.

Schedule 40 black iron pipe is sold in a number of sizes. For 12-gauge slam fire shotgun, you’ll need ¾- and 1-inch diameter pipes, plus a 1-inch cap to thread on the end of the 1-inch pipe that’ll act as your receiver.

It gets tricky here, as not all pipes are created equal, and the sizes aren’t close to being uniform. The reason for this is that plumbing isn’t a modern invention, and most standards are really just guidelines. Furthermore, pipe threads will certainly not be concentric to the bore.

When selecting a ¾-inch pipe, try to bring a few different types of shotgun shells with you to see if they’ll fit. Some will, but most won’t. If you check several pipes on the same shelf, you’ll often find inside diameter variances between all of them. Ideally, the front of the rim should sit flush, and the shell itself should have very little, if any, play at all. Ensure that the cap easily threads down on the 1-inch pipe. A proper seal is critical for this next step. This was our stumbling block, so we turned to good friends Tyler Norona and Jarrett Bushey at Illumined Arms to cut and rethread the pipe ends.

Back at the shop, drill and tap the center of the cap to install the firing pin. Centering will be the hardest part, because you’ll find that even the cap is woefully out of spec when compared to most gun parts. You can mark the primer of your shotgun shell, load it in the ¾-inch pipe, and see where the marking agent hits the inside of the cap. This is where you need to drill and will become your breech face.

Once you have a hole all the way through, you can start your tap from the outside. Go slow and use cutting oil; back out every so often to keep it clean. We used an 8-40 tap because that was the size of the set screws we had on hand. She may not be pretty, but the JBB-12 is effective and can be either a fun “I made this” project, or a weapon of last resort when it’s the only thing you can lay hands on.

Thread the set screw into the threads you created. You just need the tip to barely protrude. Too deep and you run the risk of piercing a primer. Once the tip of the firing pin is set, hit it for about 15 seconds with a butane torch to harden it.

Lastly, we attached a ¾-inch tee to the threaded end of the ¾-inch pipe, making a forend grip to more easily slam-fire the gun.

These five parts comprise a basic slam-fire gun. Aside from preparing the cap, the only real tools you need are a pipe wrench to ensure everything is snug, tools for cutting the pipe, and a file or Dremel to size the insides if needed.

We christened our creation the JBB-12.

INSPIRATION for the SLAM FIRE SHOTGUN

Former Vice President Joe Biden once remarked that all anyone needs for self-defense is a shotgun:

“I said, ‘Jill, if there’s ever a problem, just walk out on the balcony here, walk out and put that double-barrel shotgun and fire two blasts outside the house,’” Biden said. You can make the frond easier to rack by wrapping the pipe sections in burlap (as shown), parachute cord, wire, or rubber from a bicycle inner tube.

We decided to build this firearm just like he advised.

It’s a bit more of a challenging build as you need to connect the two outer pipes and ensure that the barrels can move back and forth. This means welding. Once we spaced the chambered receivers, we did the same with the barrels, using ¾-inch pipe tees to add a foregrip made of shorter pieces of pipe. Fitting the pipes was tough, and we used a liberal amount of Lucas Oil Gun Grease to keep the action smooth. As it was a bit heavy and cumbersome, we mounted a piece of pipe to act as a pistol grip.

This was intended to mostly be fired from the hip. You could add a stock, but firing two 12-gauges simultaneously, inches away from your face, didn’t seem like a good idea.

To fire the JBB-12, you load the chambers, take hold of the forward grip, aim, and slam the barrels rearward. The impact of the firing pins against the primers of the shells causes ignition and fires the projectile.

You also might want to say a Hail Mary that you don’t blow yourself up in the process.

Our first try was experimental to lessen the chances of grave injury or death. We emptied the shot out of a pair of mini shells about 1.75 inches long. Only one barrel successfully discharged, so we tightened down the set screw on the faulty chamber and slammed it again. It went bang. Next, we moved up to live ammo, again in the form of mini shells, then eventually a few 2¾-inch loads from bird shot to #4 buck shot. Both barrels fired simultaneously 90 percent of the time. You can somewhat-intentionally fire a single barrel instead of two by altering your angle when you slam. The JBB-12 breaks down into two components for ease in transportation, with each section measuring 20 inches and 14 inches, respectively.

We had built a fully functional double-barrel, slam-fire gun and have to admit the recoil was much milder than anticipated, due to the weight of the piece and the thickness of the pipe. It was much quieter than a typical double-barrel, but hip firing may have played a role there.

The slam fire shotgun barrels measured 19.5 inches, and the overall length was 20 inches. While the barrel length was certainly legal if you were building a shotgun, the overall length was below 26 inches. Had we placed a stock on the JBB-12 or added an extra 6 inches to the barrels, this would be a typical Title 1 firearm. However, there was no need for a stock on this project. In this case, the end result was to register it as an AOW (Any Other Weapon). Two shots are better than one sometimes, but make sure your shells will fit in the chambers as you build.

This is a catch-all classification for firearms that don’t have a traditional design, such as pen guns, glove guns, and so forth. If your pipe gun is extremely simple, with no grips, stocks, or triggers, looking like one piece of pipe inside another with a cap, that’ll be an AOW. The classification is also applied to firearms with one rifled and one smoothbore barrel under the 18- or 26-inch minimum requirements, like the old Marble’s Game Getter. Likewise, if you have a smoothbore firearm that has never had a stock installed and doesn’t meet both length requirements, an AOW tax stamp is the order of the day.

It costs $200 to build an AOW, just like any other NFA item on a Form 1. However, the transfer tax is only $5, so there’s a benefit when you transfer it to another entity.

The slam fire shotgun was yet another fun project. It was definitely less expensive than building the slam-fire 410-gauge, and you can walk away with the satisfaction that you built a firearm on your own. Moreover, putting it together may give you a better sense of how firearms work.

This is a gun for a time we hope never comes — when your own guns are confiscated or destroyed, and you have no chance of buying another one. Had we built a single-shot version, our cost would’ve been about $45. This one came in at about $95.

If you just want a sterile firearm, there are plenty out there in the form of shotguns and rimfire rifles built prior to 1968 that have no serial numbers. They can be had for not much more than what was invested in this project. 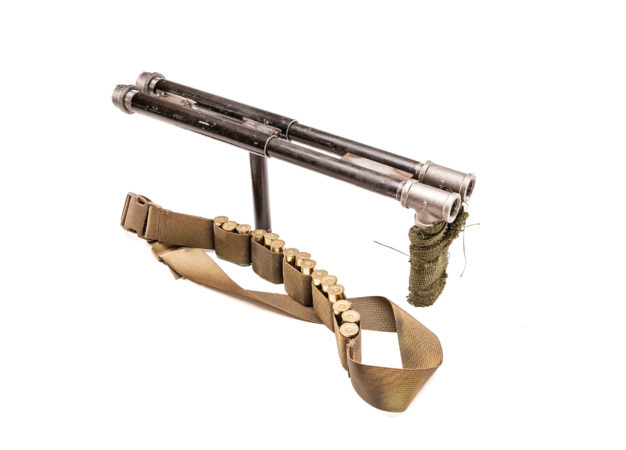 A homemade shotgun is one of the few firearms you can build without using any actual gun parts; the JBB-12 is a volley fire 12-gauge AOW (Any Other Weapon).

Look for names like Hopkins & Allen, New England Firearms, Harrington & Richardson, Iver Johnson, Savage/Stevens, Sears, Western Auto, and the like. You’ll end up with something safe and definitely a more accurate shooter.

The home-built slam fire shotgun is more of a tool to help you understand how a firearm works in most simplistic terms, providing a basic blueprint for building something like this when you have no other choice. Beyond the fun factor, this is a firearm of last resort.

It may also be your only alternative should a certain political party get their way in all branches of government and decide to shred the um, uh, you know the thing.