The Solvent Trap and the True DIY Suppressor: Titanium Dreams with the JK Armament SBR Pro 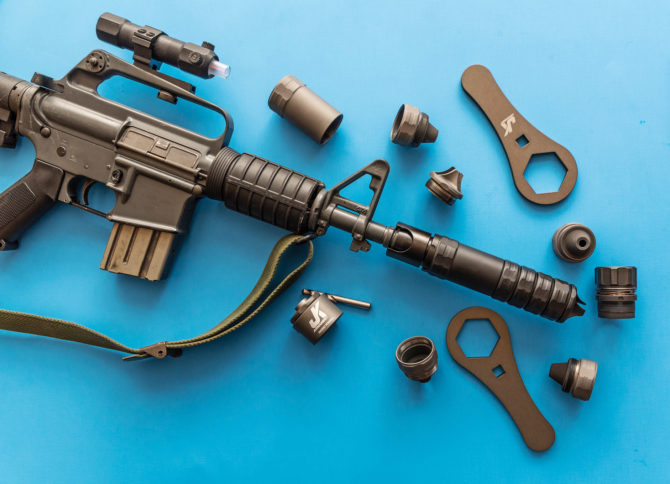 [Editor's Note: This article originally appeared in RECOIL #52 and also in the book DIY Guns. JK Armament does not produce so-called ‘solvent traps' as they are no longer allowed by the ATF. This article is for educational, historic, and entertainment purposes. However, JK Armament is alive and well–and you can learn about their latest in RECOIL #64, or online here]

“Solvent trap” is the current underground moniker for parts and kits used to manufacture your own silencer with an approved Form 1. These are perfectly legal in most jurisdictions, provided you haven’t drilled holes in anything just yet.

Why would you want to fill out a Form 1 instead of a factory Form 4 transfer? Time, mostly. As we write these words, an online Form 1 takes an average of three weeks whereas even the fastest Form 4 transfer now sits between three and four months.

Cost savings is another measure, as most solvent trap kits are available at a significant discount relative to factory silencers (invariably for a reason).

Normally when you purchase a suppressor, it’ll sit at your dealer for months — sometimes more than a year — before the federal government approves your paperwork. But it’s faster if you make your own; in fact, we did just that in RECOIL Issue 46.

We’ll get the only-worth-it-for-memes alternative out of the way first: the oil filter adapter.

About a decade ago, we first laid eyes on oil filter adapters; they were originally made by Tom Cole of Cadiz Gun Works and called “solvent trap adapters.” Cole tells us, believe it or not, that the original intention was to actually trap solvents. Later, they released their Econo-Can, a registered adapter that’s transferred like a standard silencer.

But this type of filter being featured in the 2019 release of Call of Duty: Modern Warfare really brought them into the world of mainstream memes. While you can find sketchy adapters on Amazon and Wish, Cadiz Gun Works actually manufactured and legally registered oil filter adapters as silencers and even have an oil filter replacement service for when they wear out.

We teamed up with an SOT to legally register our own. Engraving actually took more work than we anticipated because our adapter didn’t have enough surface area. A stainless steel washer was welded to the base for this purpose.

So, how effective is it? Setting aside that it makes most pistols a single-shot affair because there’s no way to attach a booster, the ungainly size that blocks sights on both rifles and pistols and the massively increased weight, simply put: It’s not all that quiet. An oil filter silencer essentially is a simple expansion chamber that works for a few shots before having to be replaced. And the larger the bore, the faster it loses any efficacy.

And oh yeah — you can’t even legally swap out that oil filter unless you’re a manufacturer.

In a world where silencers are OTC just like a receiver, rifle, or pistol, these oil filter silencers would make for a fun party trick, similar to taping a soda bottle to the end of your .22LR. But since legally manufacturing or purchasing adds on $200, and you can’t even swap the filter yourself? Hard pass.

This brings us to the exact other end of the DIY spectrum, the JK Armament.

JK Armament is a new company, just releasing “solvent trap” kits for sale in 2020. Though the company is new, the people behind it aren’t. The namesake of the company, Jake Kunsky, has over two decades of experience in industrial manufacturing and weapons design. Kunsky’s company is the culmination of his experience developing products for NEMO Arms, Gemtech, and Maxim Defense. His background with silencer design and engineering gives him unique insight into what today’s customers are looking for in a user-configurable and maintainable solvent trap.

JK Armament’s first product was the JK 155 Modular Solvent Trap (MST) Kit made for either rifles or pistols. The rifle kit is nearly identical to the pistol, except the tube is one piece instead of two, it comes with a fixed barrel adapter, and the eight stackable baffles are optimized for the higher pressures of rifle rounds, so they can’t be drilled so wide.

The name of the game is modularity, and it’s certainly evident here. Each baffle section threads right on top of another, closely mirroring what we’ve seen from the likes of Schultz & Larsen for the last decade, the Erector from Q LLC, the Dead Air Odessa, Rebel Silencers SOS, half the product line from Torrent Suppressors, and the new Sig Sauer Mod X.

No need for a tube, spacers, or math, nor do you have to worry about dubious construction, as you would with a cheap Chinesium kit.

However, these first kits were made from aluminum. Aluminum is just fine for rimfire, most pistol calibers, and subsonic 300BLK, but once you start rolling out higher pressures, the aluminum will quickly erode away.

Now, JK Armament does what we anticipated from the very beginning, making them out of titanium. Aside from being turned from titanium, the JK 115 SBR Pro kit comes with four baffles instead of eight, and a new flash hider endcap is available. If you want a larger kit with more baffles, you can simply add them prior to manufacturing.

The base tube and all baffles are threaded HUB 1.375×24 TPI, so mounts will never be an issue as nearly two dozen companies on the market currently make parts and pieces for the HUB. For pistols, a SilencerCo, Torrent, or Griffin Armament 1.375 booster will nest inside, and JK Armament makes an adapter for those with Gemtech, SDTA, or Liberty boosters.

Planning ahead will help you maximize the utility and versatility of your silencer by making it multi-caliber AF. Not only can you buy the kits, but you can buy individual and incomplete baffles at the same time. Want to make a silencer with 10 baffles? You can do that. Want to make your own bastard version of a SilencerCo Wizard Staff? Sure. Want to drill baffles with different aperture sizes in order to make this a modular silencer that’s always caliber-specific? Oh yes, you can do that too.

There’s some word going around that you can’t register a silencer in a smaller diameter than the bore holes, but that’s hogwash. There’s no regulation or dictate about how large or small each aperture has to be for a given caliber, so long as you can put the registered caliber through it in any configuration — just no extras and no spares. Of course, all of this may be subject to change at the whim of the BATFE.

The Enfield Rifle Co Novus, as seen here in RECOIL Issue 47 also works on this principle with their nesting baffle stack; it’s a 5.56 silencer that can be assembled to effectively suppress .30-caliber or .45ACP.

There’s currently no reason why you couldn’t make a JK Armament solvent trap kit with 12 baffles with three different caliber apertures, but we’d recommend Cerakoting or otherwise marking each caliber so you don’t inadvertently get a strike.

After we planned out our silencer and received our approved stamps, it was time to hit the workshop. The required info was lasered onto the main tube, so we needed to drill the baffles. Kunsky actually advises against using a drill press, even if you have access to one.

JK Armament solved any centricity issues with a custom drilling jig. It’s meant to be used with a hand drill and a vice — no need for a mill here; the undrilled baffles simply thread onto the jig. A caliber-specific bit available from JK Armament aligns with a bushing on the jig to ensure it hits center.

The same jig also works for endcaps, and since the jig itself is made of aluminum, your vice can squeeze it hard enough that the endcap won’t rotate out when you drill.

With the jig at the ready, along with a cordless drill at a low-speed setting and some machine oil, it was fairly easy. If you drill too fast or don’t use cutting oil, you can wreck one of these by chipping it if you’re not careful. Take your time, and you’ll be fine.

After each new section, we threaded the completed baffles on top of each other to confirm alignment. Make sure you clean the baffle well, or else an errant chip may mislead you.

The original JK Armament kit was aluminum, relegating it for us solely to pistol calibers and limited use with 300BLK. But with the titanium PRO solvent trap kit, we knew we could press it much further. And press it further we did.

Using a select-fire 10.3-inch rifle, we decided not to run one or two, but three SOCOM Table II tests. Table II specifies eight fully loaded 30-round magazines with rates of fire ranging from one round a second to full-auto mag dumps. The entire table is performed with no rest between stages, but everything should come down to ambient temperature prior to repeating the table.

Effectively, this is a stress test for the silencer. This accelerated wear gives you a pretty good idea of how the silencer will perform long-term.

Heat is the bane of titanium. Heat erodes titanium, and you can see it happen in real-time when sparks shoot out of the end of your silencer. There was a time when no one would have seriously considered titanium for anything other than a precision rifle or rimfire silencer, but that was nearly 15 years ago.

All said and done, we fired 720 rounds with this test, and while there was noticeable wear on the blast baffle, the others were mostly fine. But, since this is a modular can, you can simply rotate your blast baffle to the end of the stack to easily increase the longevity of your silencer. And in the worst-case scenario? Have an SOT replace one of the baffles ($125 for a Ti cup, $45 for aluminum).

The flash hider endcap performed exactly as expected too, which didn’t surprise us because it’s definitely on rather long. For our next build, we’ll probably trim them down a bit to reduce the overall length.

You’d be well-advised to add some anti-seize to the threads to aid in disassembly and reconfiguring your can. If you carefully plan your build in advance, you’ll have a handy silencer that can effectively eat all sorts of ammunition without a compromise like an oversized bore.

When we’re dealing with a new company and a new product, there are typically some warts here and there. Kunsky’s experience definitely shows in this design, bringing a lot of advanced features to a home builder that would otherwise require expensive equipment or regaling yourself with eBay parts.

We can’t wait to see what comes from JK Armament next.

More from JK Armament and about Suppressors

2 responses to “The Solvent Trap and the True DIY Suppressor: Titanium Dreams with the JK Armament SBR Pro”