Home » CONCEALMENT MAGAZINE » The Best Pistol Zero: What It Is & What Goes Into It

The Best Pistol Zero: What It Is & What Goes Into It 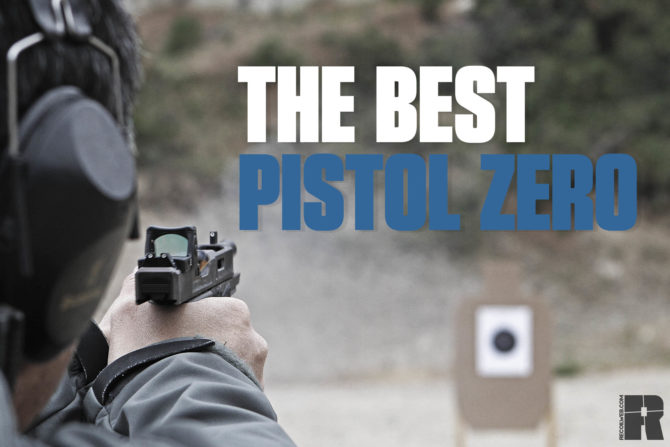 [This article originally appeared in CONCEALMENT #25]

It's You, Not the Gun

A frequent topic of discussion and the occasional internet shitstorm is that of the pistol zero. Let’s peel back a layer and examine what it is and what goes into it.

In the simplest terms, when you zero a gun, you adjust the sights or optic so your point of aim matches your point of impact at a specific distance. This convergence is the zero; the intersection between your line of sight and bullet trajectory. Bullets aren’t laser beams like in the movies and are subject to gravity. If your bore and sight lines were both perfectly parallel, their paths would never cross, and thus no zero could be obtained. Instead, it’s like throwing a football — the bullet travels up and back down again. 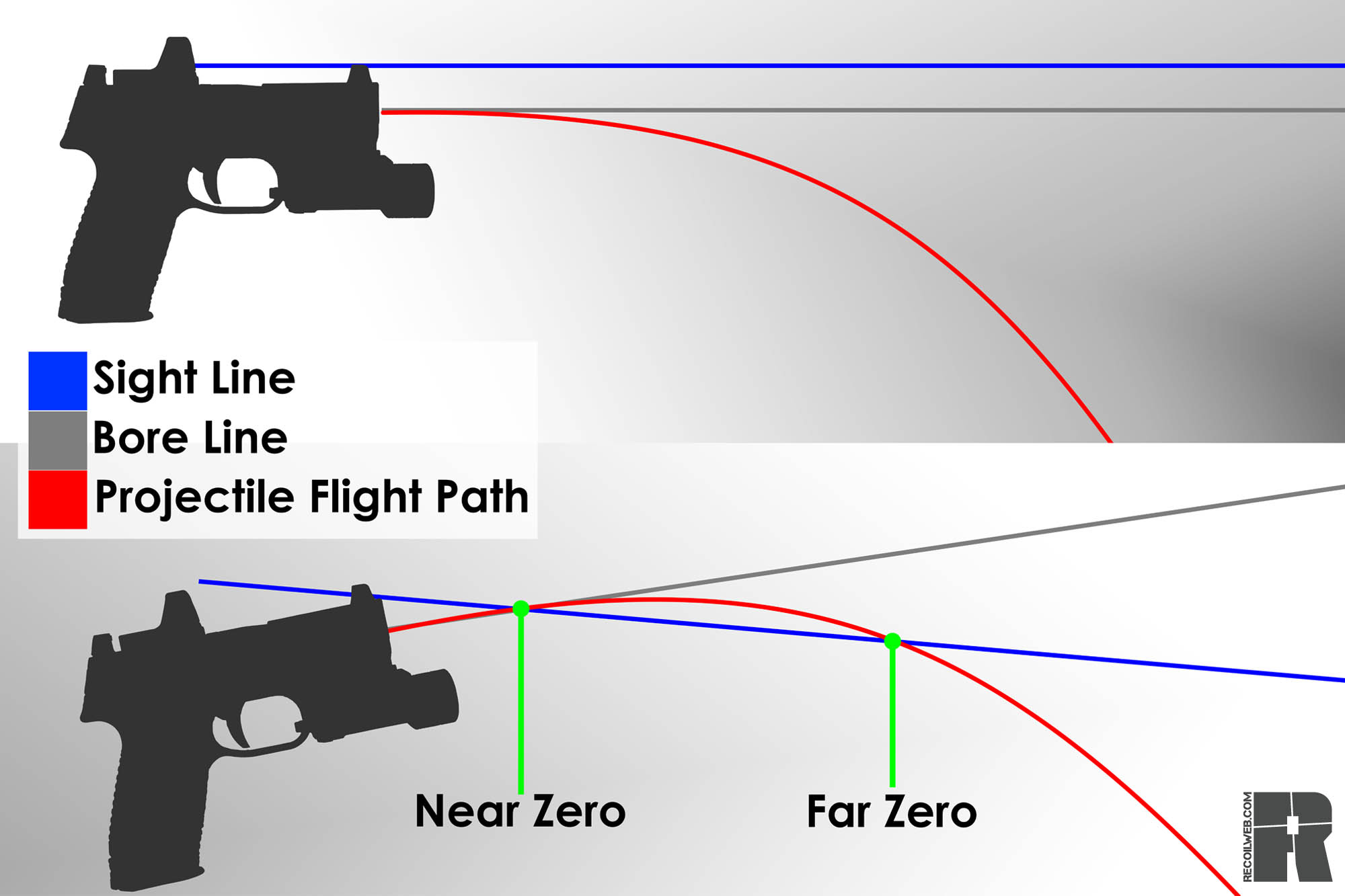 Fundamentally, the role of a zero is the same regardless of the weapon: to make it easier to hit where you aim.

AN OLD TOPIC WITH A NEW TWIST

Dots on serious pistols are a relatively new phenomenon, but one that has rapidly matured and democratized. We effectively have both brand-new and experienced shooters learning about dots together.

With pistol iron sights, this discussion is often more academic than applicable. Unless you’re rocking an adjustable tangent sight or similar, refining your pistol zero sometimes requires a punch, file, hammer, and other tools. While mounting a miniature red-dot sight (MRDS) might take a torque wrench and thread locker to perform properly, once installed the windage and elevation are easy to adjust — no hammer required. This means you can more-easily tailor and personalize your pistol zero.

Target size and distance are our primary considerations when it comes to a zero. You want a zero that gives you the most range with no need to aim high or low, within your accuracy standard. Here we define that as no more than 4 inches above or below our sightline. This is roughly the size of a human heart as well as the brain when viewed from the front, but you can choose any arbitrary standard.

This doesn’t mean that all of our shots will always be in a tiny group, and the ever-enlarging human torso is certainly much larger, but this defines our desired limits when it comes to the ballistic path.

All the same, variables affect and apply to the pistol as the rifle, but there are many we can safely ignore. Speaking practically, pistols are short-range, low-accuracy weapons that are harder to shoot compared to rifles. You don’t have to concern yourself with the rotation of the Earth.

You can always get as nerdy and granular as you want, but with handguns we’re primarily concerned with velocity and projectile weight, with sight height and ballistic coefficient as bonuses. Because we’re not talking tiny groups at a kilometer, it’s OK to copy someone else’s work from the internet … at least to get started. While it’s always nice to have a dedicated ballistic calculator and chronograph, it’s really not needed here. There are plenty of free online tools that can get you started. Here we went with 124-grain Federal Tactical HSP 9mm with data collected from a carry gun.

Here’s where the biggest debate happens, and we’ve seen people advocate for everything between 5 and 50 yards. To be clear, the largest variable anytime you pull a trigger is you, the shooter — by a ridiculous margin. Any angular deviation of the muzzle has an exponential effect downrange. The learning curve of a pistol is much higher than a rifle, but red dots can help straighten it out a bit.

Find an initial range where you can comfortably zero. Shoot a three- to five-round group clustered closely enough to discern how much adjustment is required. If that range is your desired zero range, all the better. If not, use that closer distance to lock in your windage and adjust from there. Many people like a 25-yard zero, because it’s both accessible and more difficult to perform. Twenty-five yards is the most common length of an indoor range — so most anyone can find a way to make it happen — and shooting a group small enough to make fine adjustments is much harder. It demonstrates a level of proficiency, and with that sometimes comes some boasting.

As a practical matter with trajectories, we find 5 yards to have more curve than we’re comfortable with, but the others really only drift far apart at distance. Someone who drills out B8s at 25 yards can zero wherever they please, as the most important thing is making your hits.

You’re responsible for every round out of your gun, so make them count. Even a rough zero within the confines of your skill level is better than none.

Even if you’re not shooting tiny groups or anticipating taking long shots, there are still advantages to shooting at distance. Pistols are really hard to shoot because any deviation of the muzzle is exacerbated with range. Stretching out to 100 yards and beyond may not be terribly practical (though it’s been done in the field), but it’s an excellent way to expose weaknesses in your grip, trigger pull, and follow-through as well as to practice your target holdovers. It’s also not as difficult as it initially appears, especially with a red-dot sight, causes you to think, and can be a tremendous confidence booster. It’s also just fun as hell. When you first pair a dot with a pistol, like any new marriage, the next steps can be either smooth or rough. You want to ensure your dot is at least a semblance of reality close to your bore. The good news is that most manufacturers of OEM-dot-equipped pistols have finally realized it makes sense to at least make sure it’s pointing straight. Similarly, when you have a factory-fresh quality pistol dot, normally everything is centered up — but not always. If you have any other sighting systems on your pistol that are zeroed, such as a laser or iron sights, you can perform a rudimentary alignment. We’re also fans of using laser bore sights as an aid for your initial alignment.

If possible, turn down your dot so you have a more refined point-of-aim.

If you can shoot a tight enough group to identify your adjustment direction off-hand, then you’re strongly encouraged to do so. But sandbags or other supports aren’t shameful at all, since you’ll always be the cause of the largest variance with every shot. A rolled-up range bag can work too.

The major downside to most support systems for handguns is that they’re awkward and uncomfortable to use. You find yourself in a half-squat at the firing line or holding your pistol in a funky way when seated. A ransom rest will do a great job, but it’s totally overkill for most practical applications. And to top it off, regardless of your method, you should double-check it offhand anyway.

Our common advice is to zero with your carry ammo and train with the cheap stuff. They won’t always precisely track with each other, especially as range increases, so be mindful. You can also purchase or roll your own ballistically matched training ammo.

Many of the problems with pistol dots result from improper installation–a dot that works loose won’t hold zero, and you’ll have a bad time.

A pistol zero isn’t a one-and-done evolution. Your zero can and will shift with environmental factors, impacts, and a host of other situations. It may not shift much, but the best way to tell is to confirm and adjust regularly.

The best-calculated chart in the world doesn’t mean a damned thing if it doesn’t represent reality. After you eyeball charts and perform your zero, the most important thing to do is check your work. Any chart, including the one published here, is just a starting point. These are just aids — none of them are replacements for getting out on the range and confirming for yourself.

One response to “The Best Pistol Zero: What It Is & What Goes Into It”