The Legalities of SilencerCo’s Maxim 50 Yes, you can order a “silencer” and have it shipped in the mail straight to you, at your home…no matter where you live.

No paperwork, no government-regulated wait time, no NFA tax, and … the best part … no getting in trouble with federal law.

I'm going to tell you how this is possible below. But here's a hint: it's due to the creative thinking of the SilencerCo team and the introduction of their Maxim 50.

But first, a bit of a background on the law…

WHAT IS A FIREARM?

Under federal law [1], a firearm is defined as:

A. any weapon (including a starter gun) which will or is designed to or may readily be converted to expel a projectile by the action of an explosive;
B. the frame or receiver of any such weapon;
C. any firearm muffler or firearm silencer; or
D. any destructive device.

Such term does not include an antique firearm.

From the law, we know that an object (weapon) that fires a projectile (bullet) from the force of an explosion (gun powder) is a firearm. This means that an air-rifle, which uses compressed air to fire a projectile, is not a firearm under federal law.

Of course, it's not that simple. Some states have their own laws (more on that in a bit) that are more restrictive. For example, in New Jersey, air rifles are considered “firearms” under state law.

The federal definition also includes a few other things as firearms: the frame/receiver of a firearm is also a firearm by itself, an object that isn't quite a full firearm/frame/receiver yet but can be “readily converted” into one is also a firearm, and silencers are also firearms. Until SilencerCo figures out how to direct-ship grenades to your house, we'll skip the “destructive device” part of the definition.

We are going to focus, however, on the last part of the definition which exempts “antique firearms” [2] from being considered firearms.

“Antique firearms” use an explosive to shoot a projectile, but they were either made before 1899 or they are not capable of firing conventional ammunition (centerfire or rimfire). Instead they use a similar or “replica” ignition system to those guns made before 1899 (e.g. matchlock, flintlock, percussion cap, etc).

What does this mean? Muzzleloaders, even if they were made this morning, are NOT firearms and can therefore be shipped directly to your home without having to go through an FFL. Be careful here- some muzzleloaders (see Remington M700) use the frame/receiver of an actual firearm and are therefore treated as full firearms because of part B of the federal definition above. Also, some muzzleloaders have the ability to swap barrels to fire modern cartridges and are therefore considered firearms. 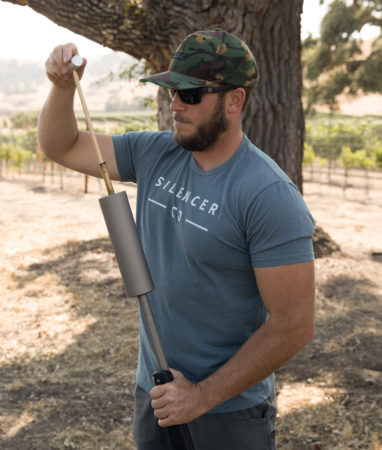 The term “Firearm Silencer” or “Firearm Muffler” means any device for silencing, muffling, or diminishing the report of a portable firearm, including any combination of parts, designed or redesigned, and intended for the use in assembling or fabricating a firearm silencer or firearm muffler, any part intended only for use in such assembly or fabrication.

According to the definition above, if the device makes a portable firearm quieter, then it's a silencer.

Unlike “standard” firearms where the only part that is considered to be a firearm by itself is the frame/receiver, EVERY part of a silencer is a silencer. Therefore, a single silencer baffle, by itself, cannot be shipped to a non-FFL because it is regulated as if it were a complete silencer.

As you probably know, silencers are legal (in most states) but if you don't have an FFL, then you'll either need to build your own using an ATF Form 1 or you'll need to purchase one from an FFL (or someone to which it's properly registered) using an ATF Form 4.

This process involves the paying of a $200 tax to the federal government and long wait times for your paperwork to be approved. It also comes with rules about where you can take it and who can have access to it.

Also, firearms cannot be transferred to someone else via interstate commerce.  If you want to buy a rifle from out of state and have it shipped to you, then you'll need to go through an FFL

So, how did SilencerCo make a rifle and silencer that can be shipped straight to your home? Great question… SilencerCo thought outside the box and took a true muzzleloader and permanently attached a silencer to it.

Of course, someone could try to cut the silencer off and re-purpose it for a firearm but that action would constitute the “making” of a silencer. Remember, it's legal to make your own silencer (in most states) as long as you file the proper paperwork and pay the tax first.

For example, there are airguns that have integral/permanently attached “silencers.” On the air gun, they're not regulated. But, try to take one off to use it on a firearm and you're making a silencer.

Unfortunately, the topic of covering EVERY state's laws is way too much to cover here. Also, state, and local laws change so quickly that you'd still need to confirm that such a device is legal where you live/plan to go with it. Just because something is legal in your state, doesn't mean that it's legal in your county/city/town nor that it's legal for your intended use (hunting).

As I mentioned in an example above, New Jersey is a state that regulates ANY device that fires a projectile as a firearm. Therefore, the Maxim 50, other muzzleloaders, and even air rifles are firearms and must be possessed in accordance with New Jersey firearm law.

This is a very creative work-around but the lesson here is to be careful and know your local laws and the laws of where you're traveling. Editor's note: Due to state laws in New Jersey, California, and Massachusetts, SilencerCo has issued a statement in reference to SilencerCo's integrally suppressed  Maxim 50. Even though the Maxim 50 is federally legal, as per the response from the Bureau of Alcohol, Tobacco, Firearms and Explosives, ongoing investigation is needed to determine if it is legal by state laws in NJ, CA, and MA. Read the official statement from SilencerCo:

“Upon launching the Maxim 50, SilencerCo received several immediate legal challenges from authorities and lawyers in the states of New Jersey, California, and Massachusetts. Since we have no desire to place any consumer in a situation where they may get arrested and charged with a felony because their state defines a firearm differently than the Bureau of Alcohol, Tobacco, Firearms and Explosives (BATFE), we have placed orders from those states on hold and are refunding customers pending conversations amongst lawyers. These three states have rules that are not entirely clear with respect to firearms and silencers and antique firearms, and it is relevant to point out that no states contemplated a product of this sort in their laws.

SilencerCo asked for and received a determination from the BATFE on behalf of the federal government prior to launch but could not do so officially from each state government or risk specific state-level legislation being passed prohibiting the product before it was even launched. We will refund orders to customers from these states and update consumers as soon as feasible as to the ultimate determination in California, New Jersey, and Massachusetts.

We believe that law­abiding citizens should have the ability to purchase and own silencers, regardless of what state they live in. We will continue our efforts in advocacy and encourage all who share our desire to take action and contact their elected representatives by visiting www.fightthenoise.org. “ Ryan Cleckner is a former special operations sniper and sniper instructor. Currently, he's a firearms law attorney, best-selling author, RECOIL/Carnivore contributor, university lecturer, podcast host, and entrepreneur. His most recent projects include teaching folks how to get an FFL, and how to keep it, at RocketFFL.com and he's launching a program to qualify people to get a CCW, valid in over half the country, online at RocketCCW.com.