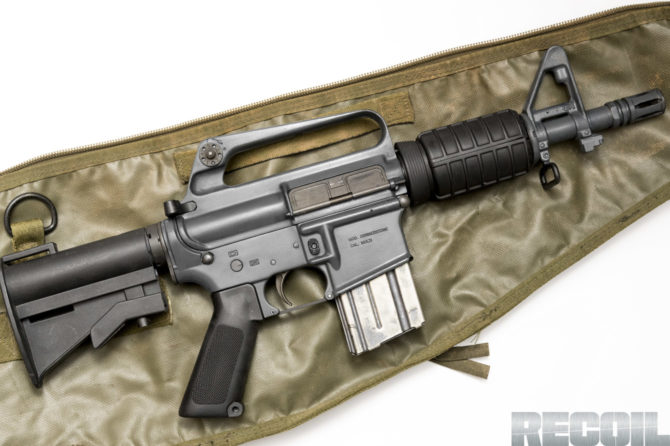 What would happen if a Colt Model 733, and one of the earliest attempts at a carbine, the Model 607, had a weird baby? And what if that baby was even smaller than the parents?

Being abhorrent gunnerds, these are the questions that keep us awake at night. We're not entirely sure if it started with a mid-60s patent drawing, or a trolling image someone photoshopped. But inspiration took hold. So much in fact that we actually made it. To be perfectly clear: This is not a historic firearm–it's our own creation. 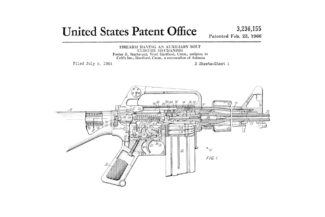 Since we were making this ourselves, the world was our oyster. While there are innumerable e-fistfights about what is “period correct” for XYZ model, we have no such limitations. Our self-imposed limitations were this:
–It had to look like something that may have been produced in the late 60s or early 70s
–It had to function
–It had to be short as hell With an overall length (OAL) of a mere 21 inches, a 7.5 inch barrel, and vintage looks, the N-23 would fit right in with other early Colt projects.

Regarding the nomenclature, if you were to number the alphabet with a rudimentary substitution cipher (A=1, B=2 etc), the letter W would be 23. The full name of the N-23 is: CAR-15 Model Never-Was. The lower receiver was both the easiest and the hardest part. While an A1 or XM-style lower from Nodak or Brownells would make for an excellent host, we already had a Grey Ghost Precision Cornerstone lower registered as an SBR.

While we considered cutting of part of the fence on the magwell, filling in the modern markings, and removing reinforcements. But it was ultimately decided that a modern lower, skull and all, would be used. The slick side upper is a pull from an actual Colt Model 602 and not a reproduction. The anodizing doesn't match, of course. 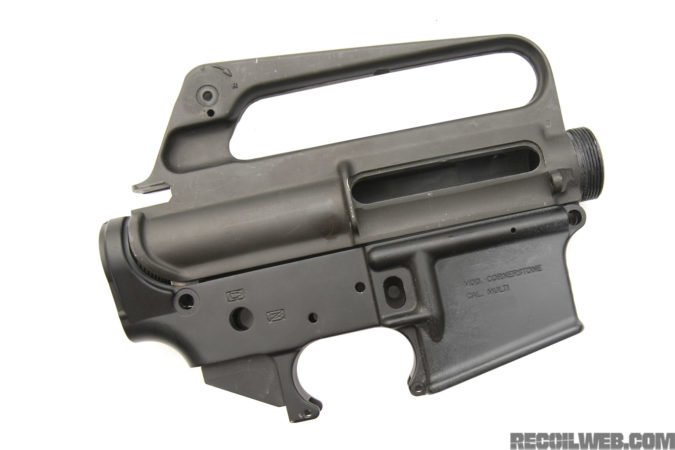 The easiest way to ensure we would get that “oldschool Colt grey” would be to bead blast everything, and either have them anodized or Cerakoted. But we didn't want to mess with that beautiful original Colt finish on the upper. A rattlecan solution was used instead, as it would be simple to scrub off down the line. The A1 style grip is a repro from Brownells.

If you take a close look at the buttstock, you'll see that it's shorter than a standard. Hello, hacksaw and palm sander. We mated it with an LMT PDW stock, which looks like a regular receiver extension but a couple inches shorter. Yes, there are some corresponding internal changes as well (see our full review here). Using the LMT/cut CAR stock combo we were able to take off inches without making the N-23 appear too modern. For the 7.5 inch barrel, complete with front sight block (FSB), handguard cap, and delta ring assembly we hit up Ballistic Advantage. While we may not have been the first to make that order, we have to be one of the very few. An A1 flash hider finishes off the barrel. Handguards were the trickiest part of the equation. For scale, realize that normal CAR handguards would reach nearly to the end of the muzzle. But we did find a solution.

Starting with a repro set of “skinny” CAR handguards, we first tossed the heatshields and cut the plastic to length. The end pieces that go into the handguard cap were cut off of the stubs. Then it simply became mating the two pieces together; first we used quick-dry super glue for initial fitting, and then JB Steel Stick on the inside and outside. After it's fully cured, Steel Stick can be filed, sanded, and painted. So we did, and it blended beautifully. All told this process took about an hour. We're not overly concerned with how robust the epoxy putty is, as the new delta ring assembly itself kept them in place even without the front tabs. After the barrel was rattle canned, the build was essentially complete.

It wasn't until relatively recently that shorter barrels for ARs became viable–either due to unreliable functionality, ammunition ill-suited for the role, or both. As projectile and powder technology marches on, we now have some loads available for short barrels that ballistically do better than a 22mag.

Sure, you're going to pay more to play, but it's not as if most of us run to the range with Mk310 Mod 0 ammunition. Note that if you do want to use a short barrel for anything other than paper or cardboard, be extremely choosey with what you feed it. That smells like a follow-up article, doesn't it?

But does it shoot? Yes. Yes it does. Fire breather.

Because the Ballistic Advantage barrel comes with an F-marked FSB intended to be used in conjunction with a flattop upper receiver, we knew we may run into some issues zeroing with our carry handled sights.

For size comparison purposes, check out the Model N-23 relative to its brothers.

Incidentally, the Model N-23 fits with room to spare in an M60 spare barrel bag. Huzzah. Back to the Future

This isn't the end. We're planning on making an N-23A1 with lessons learned from this one. Firstly, a reproduction lower will be registered as an SBR. A repro upper will be used as well, so the entire package can be matched up without trawling the aisles of Lowes. While spray paint is cheap, it's easily chipped.

As it stands right now, the paint job is a tad too Monet–get too close and the ugly comes out.

Lastly, a 3-prong flashhider will be installed. And maybe we'll try our hand at cutting down some triangle handguards.

Practical? No.
Fun as hell, both to build and shoot? Absolutely. You Are What You Eat
Liberty Ammunition: a new management team takes the helm
A Knife Forged from World Trade Center Steel
Working Dog Dry Goods