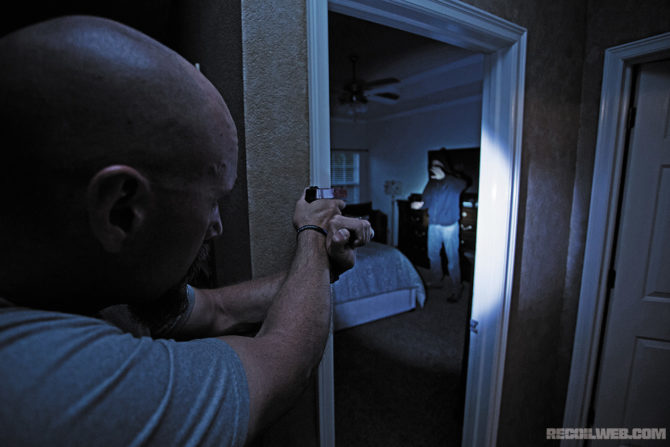 If you miss the opportunity to implement your situational-awareness training and avoid a fight, your options for survival become extremely limited. People may argue that it's not necessary to use deadly force, and that human beings should attempt to preserve life when at all possible, even when faced with death or serious injury at the hands of another person. Prosecutors will argue in court that you, the gun owner who used deadly force, could've retreated, that you are a gun nut, and that your use of deadly force was premature and unreasonable. “Why did you carry a gun anyway?” “Were you looking for a fight?” “You could have gotten away without hurting anyone if you had just paused to consider all the options.”

Those of us with sufficient training and experience realize the importance of the split-second decision-making required when faced with a life and death situation. The second, or fraction of a second, spent considering whether it would be possible to get away can spell death for the innocent. Daily videos and news stories abound showing how gun owners either save lives by using deadly force or lose lives by not reacting quickly enough. Unfortunately, often found alongside these news stories is a wealth of misinformation about what stand-your-ground laws do, or do not, accomplish.

With this kind of nonsense being accessible to anyone who can type three words into Google, it's not surprising that gun owners and non-gun owners alike are confused about what a stand-your-ground law actually accomplishes.

Depending on what you read, anywhere from 22 to 35 states have some type of stand-your-ground law. The anti-gunners call them “shoot first” laws, and harp on the idea that someone does not have a duty to retreat if possible and can get away with murder if they can convince a judge that they were in fear for their lives.

What does a stand your ground law really do? The basic premise of an effective stand-your-ground law is that it will protect innocent victims from judicial prosecution who choose to use deadly force when faced with the threat of imminent death or serious bodily injury, even if there was a possibility they could have retreated.

A stand-your-ground law says victims threatened with deadly force need not turn and run, but can stand their ground and meet force with force to defend themselves; you should not be prosecuted or found guilty of a crime under such a circumstance. This protection should exist everywhere, not just in certain locations. This is, in part, why stand-your-ground laws differ from castle doctrine laws, which only protect people who use deadly force in specific locations, such as their home.

Let’s say that you are walking home at night, and a bad guy walks up to you with a knife, is within a few feet from you, and tells you that if you don’t give him $20, he is going to cut you up. Now, you may be a marathon runner, in great physical shape, have several roads leading away from the bad guy, maybe a crowd of people you can run into, a restaurant with an open door not far away, or any other way of escaping you might imagine. A stand-your-ground law, however, is intended to protect you from having to consider any of these other options. Instead, if you have a gun ready and decide using it is the best option, then you should not be prosecuted for making that decision.

But, the mere existence of a state law purporting to provide stand-your-ground protection is not always good enough to prevent victims who've faced a life-or-death situation from facing prosecution or conviction. In other words, some stand-your-ground laws are completely ineffective in actually allowing someone to stand their ground and avoid arrest, detention, charges, prosecution, and conviction.

The way some stand-you-ground laws are written allow the prosecution to back-door evidence of your other options into your hearing or trial. Even though a stand your ground law may state that you don't have a duty to retreat, the jury gets to hear of all the other options that may have been available to you anyway, whether you were aware of them or not. The prosecutor then gets to argue that using deadly force, under the circumstances where you could have escaped instead of pulling out your gun, was not what a reasonable person would have done. The jury can then agree with this argument, find you guilty of some type of homicide, and send you to prison. When I was drafting a proposed castle doctrine and stand-your-ground law for my home state of Idaho, I searched for the most protective laws in the country. Florida came up at the top of the list. Even though Florida has a pretty good castle doctrine and stand your ground statute, lawmakers are still pushing for even better protection this year. Florida is not alone in this endeavor, but its progress in getting the law passed grabbed some attention. Because this law is one of the best, and may soon be even better, I will use it as an example to show how well it protects gun owners, so you might consider pushing to update the protection you have in your state.

After all, if you are not required to turn and run, then why should a jury even get to consider the options? All they should be allowed to hear is evidence about whether you were faced with a deadly situation. If you were, you are justified in defending yourself with deadly force. That is how a true stand-your-ground law should protect gun owners. After all, you may not have had time to consider such facts yourself, so why should a jury? On top of it, the proposed Florida law would put the burden on the prosecutor to prove to the judge, before your trial ever starts, that a stand-your-ground law does not apply to your case. Putting the burden on the prosecutor will prevent the unnecessary and wrongful prosecution of people who need the protection of the stand-your-ground law. This pre-trial decision of whether the stand your ground law applies will save taxpayers money by preventing unnecessary trials, and will save the accused from the stress, cost, and risk that comes with any trial as well.

The bottom line about stand your ground laws is that they have been passed to protect the innocent from prosecution after making a split-second decision to use deadly force to defend against deadly force. Victims of violent attacks should not become prosecuted criminals. People who are not criminally-minded act the best they can when faced with violent situations, and the law should seek to protect their lives over and above any criminal without questioning every option they may have chosen in the face of the stress associated with a deadly situation. Working towards strengthening the stand your ground laws in every state is a valid, justifiable endeavor, and every law-abiding American should support this effort.

About the Author
Alex Kincaid is a former elected district attorney and current firearms law attorney with more than 19 years of experience. She is an active proponent of the Second Amendment, a legal analyst, and author. Alex hosts an online show highlighting current firearms law-related news called The AK Show.
www.alexkincaid.com