Home » Gear » What About a Drop Leg Mag Pouch?

What About a Drop Leg Mag Pouch? 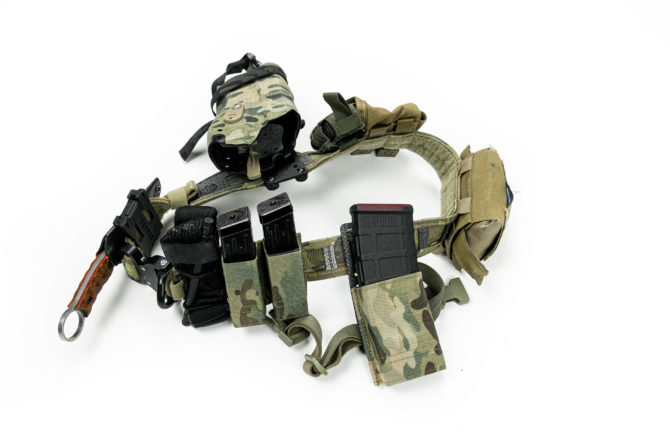 As gear continues to migrate from the plate carrier to a belt, it faces different challenges to overcome. Belt-worn gear can make sitting in a vehicle uncomfortable, and the speed of drawing a magazine from the belt is lost if one can't get to it when wearing a plate carrier. The drop leg holster helped shooters get to their pistol, when worn correctly that is. If it works for pistols, it should work for magazines, correct? After a few seasons with Unobtainium Gear's Mid-Ride Reload Adapter, the answer is a little more complicated than expected.

A drop-leg style magazine caddy and adapter wouldn't be possible without modern materials. The flat sheet of Tegris provides a mounting platform that holds its shape enough to keep a magazine in place, while having the flexibility to hold up with movement. Mag pouches attach to it like molle, so the user can choose their own.

Lowering the magazine by about four inches opens up the possibility of carrying a 40-round Pmag as a speed reload without it banging against a plate carrier. The Mid-Ride Reload Adapter comes with a leg strap as well, but it might not be needed depending on one's setup. If the belt is worn at the top of the hips, instead of resting on the top of the femur, the magazine caddy will rest approximately at the hip joint. Any lower and it would be a problem.

Although it doesn't hinder the kinds of movements common to gunfighting, some considerations must be taken. Magazine pouches that collapse are doubly hard to re-seat, so Esstac Kywi's make an excellent option.

A drop-leg mag pouch will disproportionality impact the quality of life depending on one's body shape. The combination of plate carrier and belt are not always kind to those with a shorter torso, and the Unobtainium Gear Mid-Ride Reload Adapter helps alleviate it a little bit.

A thing to consider is how much one's gear moves about while running, jumping, and climbing. Depending on the belt, pouch, and placement, a magazine can work its way out of a caddie, or swing back and forth on the hips, fatiguing the carrier. Beyond that, slings, straps, and other can snag on magazines when they are carried vertically on a belt. Dropping the mag down helps with this, immensely.

The Unobtainium Gear Mid-Rid Reload Adapter can be slid over a belt, or secured with paracord and comes in cuts for either a 1.75 or 2-inch belt. By riding just below the belt, it limits magazines to being stored at one's sides. Good thing that's the trend right now.

The adapter can be used for more than magazines, so there's plenty of room to explore new shooting belt loadouts.