Home » Featured » Get Mid-Evil with the Overwatch Monopod

Get Mid-Evil with the Overwatch Monopod A Southern California based company, Mid-Evil Industries, has a new monopod out that is unlike any we have ever seen before. We wrote about Mid-Evil Industries in the past and covered their vertical foregrip that swivels 360° to allow the shooter more control of the front end of their rifle. The Overwatch Monopod builds on that idea as well as a few others that have come to market since then.

The Overwatch Monopod was developed by the designer and inventor of the Mag Magnet and TX3, Mid-Evil's owner and founder, Steve Azhocar. Last year when we checked in with Mid-Evil, they introduced another Quick Detach accessory in the form of a mini tripod that could be incorporated into the vertical foregrip, the 360° VFG QD-TRIPOD. Hailed as the first-ever Quick Disconnect Mini Tripod, it offered infinite adjustment possibilities from smooth 360° rotation and a full-tilt function. You could literally support the rifle in a completely vertical position if you wanted.

However, with constant input sent in by shooters using his gear from the competitive circuit to law enforcement snipers, Azhocar forged ahead and came out with the Overwatch which literally takes the 360° tripod system to new heights by means of an adjustable monopod that deploys in seconds. 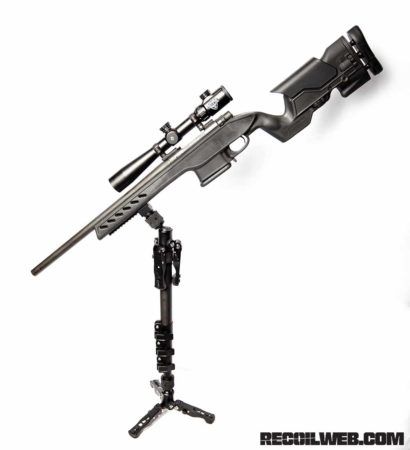 We found the tripod interesting and very usable from the bench or prone position, but some shooters needed height for seated, kneeling and of course standing positions. There are other monopods and shooting sticks out there but Mid-Evil's Overwatch gives the shooter the ability to remain rock steady and the ability to tilt, pan or scan with the rifle due to the tripod base and the 360 foregrip. Having used tall tripods in the past, the main complaint was the amount of real estate they took up with the legs deployed. The issue with monopods was often one of stability. Mid-Evil seems to have found a perfect balance between the two. Stability, while keeping the package slim.

All of Mid-Evil's products are constructed of aluminum and have extreme temperature resistance. We found them to be sturdy, durable and lightweight. They hold up to recoil and the general knock-around abuse our gear typically goes through on any given day.

The same Quick Detach system found on the tripod and VFG is in use here, no turning, twisting or use of tools at all, you just slide a button to open and push it up to lock. Attachments are available in Picatinny, Key Mod or MLOK.

Currently, the Overwatch is available in two flavors and priced accordingly. For more information check them out on the web: