Commodore Matthew Perry opened Japan to the world in 1853. Before that time, Japan successfully isolated itself for centuries, resisting external interaction and influence. Following considerable internal strife, Japan committed itself not only to international trade and interaction, but competition. Modernizing Japan’s military was a major part of this effort and the Type 99 was a key example of their efforts.

By 1905, Japan defeated a major world power in battle, Russia. By World War I, Japan was able to help the Allies secure the Pacific. Snubbed at Versailles in 1919 and in subsequent international negotiations, by the mid 1930s, Japan set its own course of imperial expansion in the Pacific. Considered the United States’ greatest potential enemy in the interwar period, by 1942 it looked as if Japan might overrun the entire Pacific and present an existential threat to the United States. At the forefront of Japan’s modernization and expansion were its navy and army, both imbued with a sense of Japan’s destiny, history, and Bushido. The tip of the spear on land was the Japanese infantryman, and the Type 99 rifle was to be at the forefront of Japan’s conquest and expansion. The Type 99 was essentially a modernized Type 38, a rifle Japan’s infantry had been equipped with for decades. Externally, and from a distance, the rifles are similar. The major difference between the two was caliber. The Type 38 was chambered in 6.5 x 50mm; the Type 99 in 7.7 x 58mm. This change in caliber was largely the result of Japan’s combat experience in China. Post combat assessments revealed the 7.7mm cartridge was preferred due to its perceived effectiveness vis-à-vis the 6.5mm. The Type 99 action was certainly up to the challenge, being among the strongest standard issue military bolt action rifles ever made. It was an almost indestructible design, and the 7.7mm cartridge was well within the effective limits of the design’s capacity. The downside of this combination was the increased recoil of the 7.7mm cartridge in a rifle that was lighter than the Type 38. While shooting enthusiasts may argue the effects of recoil can be mitigated through training, in practice the average infantryman drafted from civilian life has little firearms experience, and substantial recoil can reduce the effectiveness of an infantry weapon. Those familiar with the MP43/44’s development will be familiar with the early after-action reports of surprisingly more hits at longer range with a short 7.92mm cartridge, largely attributed to the significant reduction in recoil compared to the 7.92 x 57mm; pain matters. The 7.7mm was ballistically comparable to other full-size rifle cartridges of the period, and it was issued in a variety of loads for every need from ball to armor-piercing, training, etc. Original Japanese ammunition in any quantity is unusual on the market. Several commercial manufacturers now produce at least one load for collectors and shooters. Fully dressed, the Type 99 was a well-equipped rifle. In practice, it was issued with a sling, dust cover, monopod, and innovative (if slightly optimistic) rear sights intended to allow the shooter to effectively estimate the speed of enemy aircraft and engage them with rifle fire. The bore was also chrome-lined (at least in the earlier models). In the humid and hot environment of the Pacific, this represented a major design improvement. The rifle also came issued with the Type 30 bayonet. The most prevalent image of World War II Japanese infantry in many people’s minds is that of the infantry with rifle and bayonet, either waving the Rising Sun flag or leveled in the banzai charge — storming across malaria-infested jungle streams at outnumbered Marines doing their best to melt their 1917 Browning MGs trying to stop them. It has been argued, the bayonet was to the average Japanese soldier what the sword was to his officers, a symbol of his superiority and authority over his enemies. Unfortunately, this superiority translated into what most of Japan’s enemies considered unmitigated cruelty. Many of the crimes committed against both civilians and Allied prisoners during World War II were at the tip of the bayonet, a de facto sword for the victorious Japanese infantryman. 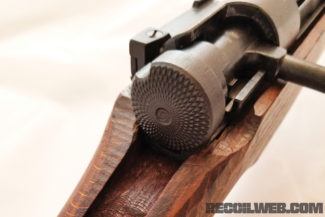 The Battles of Guadalcanal and Midway represented turning points in the Pacific. Afterward, the Japanese found themselves increasingly on the defensive. As the war continued, Japan, much like Germany, found itself increasingly isolated from vital resources needed to conduct the war and produce material due to Allied dominance of the sea lanes, air space, and ground.

The Japanese modified their small arms production just as the Germans did. The Type 99 underwent a series of manufacturing simplifications designed to economize on materials and manufacturing time. In the military artifact-collecting community, these are typically referred to as “last-ditch” rifles. These may be found with wooden butt plates, simplified peep sights, unfinished bolt handles, rough finish, machine marks, and a number of other characteristics that distinguish them from earlier, nicer rifles made when Japan’s manufacturing base was under less pressure. Additionally, a large number of training rifles were brought back as souvenirs. These were designed to fire training ammunition only, and they can be exceedingly dangerous if fired with full-power ammunition. If you have any doubts, carefully research your firearm or consult somebody familiar with Japanese small arms.

At the end of the war, soldiers, sailors, and Marines were ordered to remove the chrysanthemum seal from the receiver of captured weapons. The mum signified that each weapon was the property of the emperor who was viewed as divine, a living god. The mums were ordered to be removed in order to smooth over the process of capitulation, though the logic of this smoothing over process was highly questionable. Mums aside, virtually no Japanese were tried for horrific crimes compared to those perpetrated by the Nazis on the European front. Partially out of spite, many servicemen refused to remove the mums, and a Type 99 with an intact mum will command more money on the market.

This Type 99 is special, as it can be identified as coming from a specific person and place of capture. Lt. James F. Slaughter M.D. USN recovered this rifle from Iwo Jima after the invasion. During the course of the invasion, he operated on wounded in shifts sometimes exceeding 24 hours. While he was also present for the invasions of Guam and Okinawa, this rifle and bayonet are the only weapons he brought back as trophies.

More on Historical Firearms and their Stories