First introduced in 2014, the original Vertx Commuter Sling received a major update this year. This is the Commuter Sling 2.0. Not only are there some great colors that closely mimic some high-end outdoors packs, but a ton of new features. Firstly, this new Commuter sling is 10% lighter than previous models. All the generic hook & loop has been replaced with genuine name-brand Velcro. It's much more durable, and it won't fray or run even after long or repeated use. Of course, you can use any hook-and-loop pouch, though has it's own Tactigami line of Velcro inserts. The previous model of the Commuter bag only had one place for a ballistic insert, either a plate or a panel, but the new model has two. If you have the bag entirely clam-shelled open this doubles the coverage offered by your ballistic inserts, albeit with a gap between the panels. When the bag is closed, it means additional penetration protection. Some bags rely on ballistic panels to offer structural rigidity; thankfully there's ample support in the Commuter bag without the addition of a panel. You can easily carry whatever the heck you can fit inside without the bag looking janky, within reason. Just as before, you can go overt on the outside with some MOLLE, but this pack still doesn't look like anything like a tactical or military bag. The strap received some upgrades. It features doubled up webbing called 1919 webbing. It's used in place of a single webbing strap that's sewn to the pack strap in one-inch increments to form MOLLE channels. Instead, the 1919 webbing is two webbing straps woven together at one-inch increments that form invisible MOLLE mounting points. Using this construction technique, there's no tell-tale, one-inch spaced, horizontal stitching lines that broadcast a tactical appearance. There's a short Hypalon attachment point, as well, and a small piece of elastic was added to secure a hydration bladder tube. Speaking of bladders, there's now a pass-through on the bag for a hydration tube, too. On the subject of straps, a new one has been added to one side of the bag, making it quick to grab or simply carry like a briefcase. 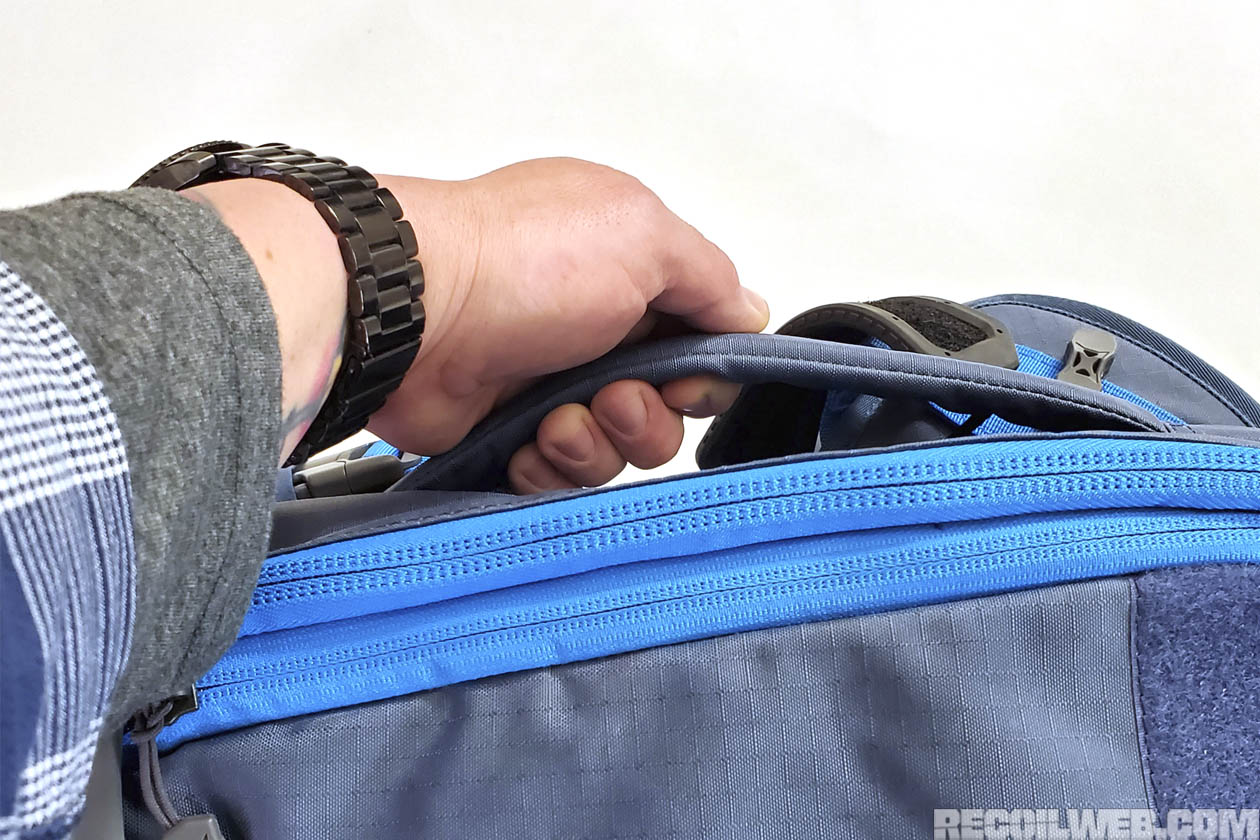 The mesh back has been replaced with foam to make the bag cooler and lighter weight. There's a pass-through on the bag in order for the Commuter to play well with rolling luggage, and also if you want to cosplay Captain America. That last part might sound silly, but Vertx told us it's been used this way to save someone from being plugged in a short gunfight. 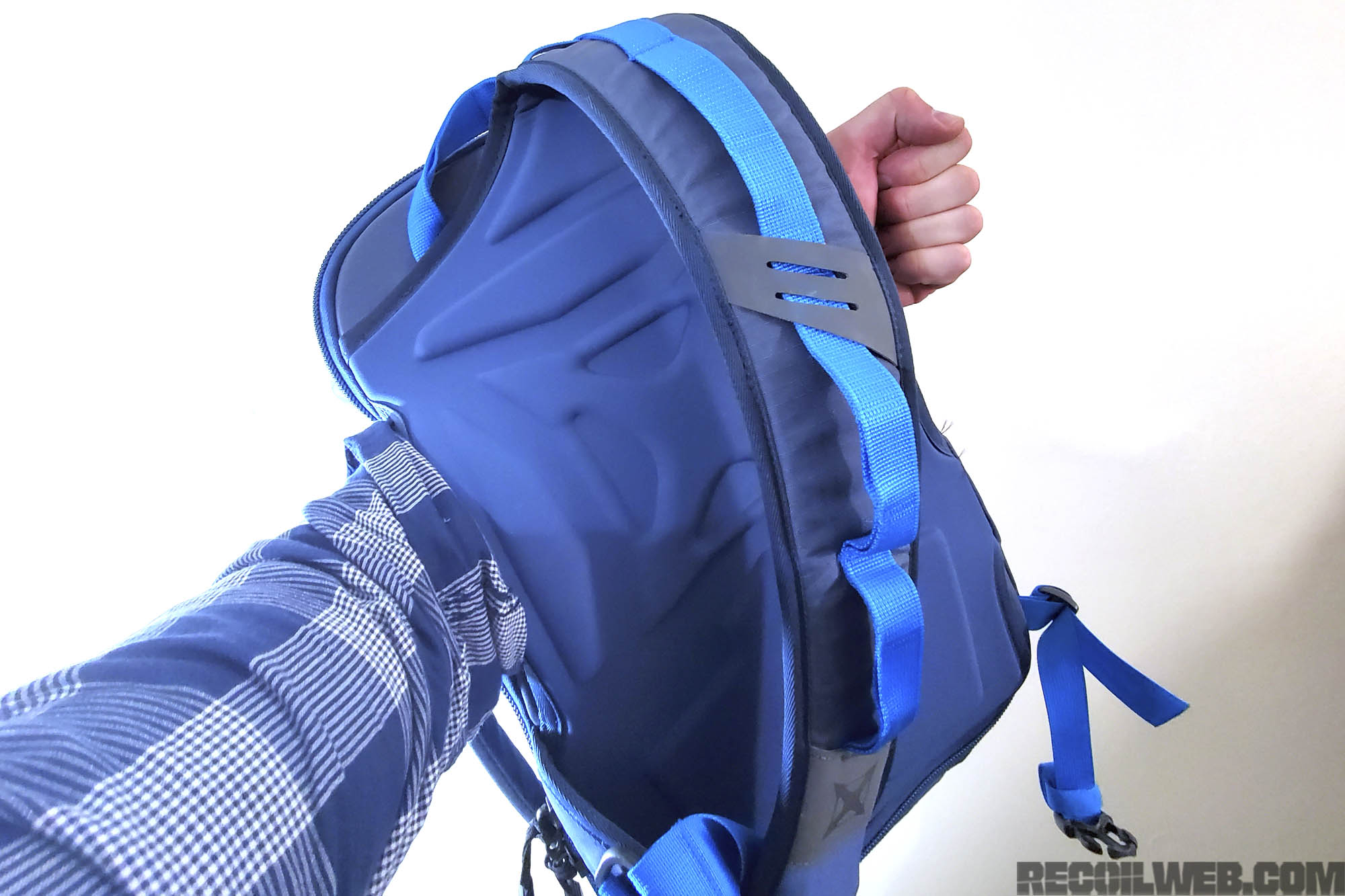 The CCW stash pouch has some upgrades, as well. This original version only had Velcro on the body-side of that compartment, which means your Tactigami holster or other pouches won't stick to both sides. Vertx added a retention hook to that compartment to prevent the entire bag from just clamshelling open after you pull the zipper. The pouch zipper has locking rings if for some reason you're trusting TSA locks to keep it secure. Not really a feature we look for, but it is a new addition. 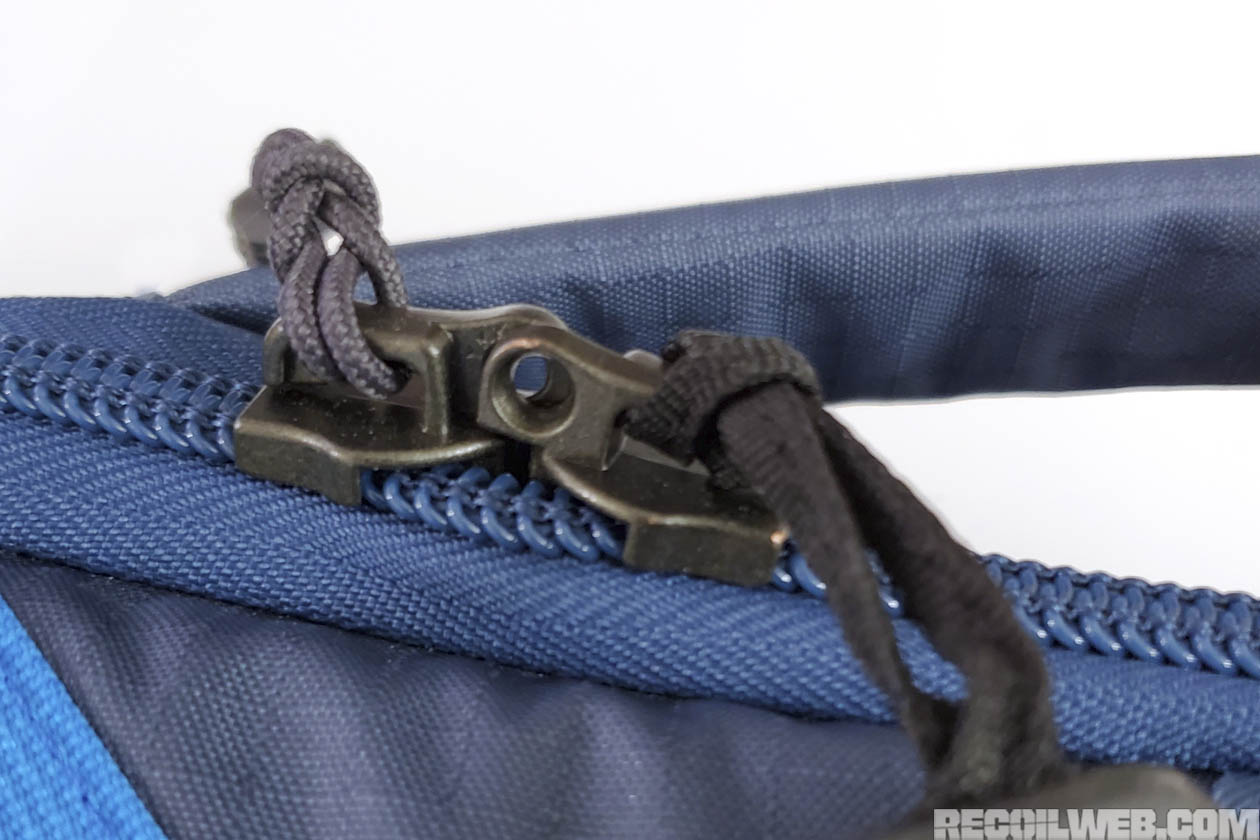 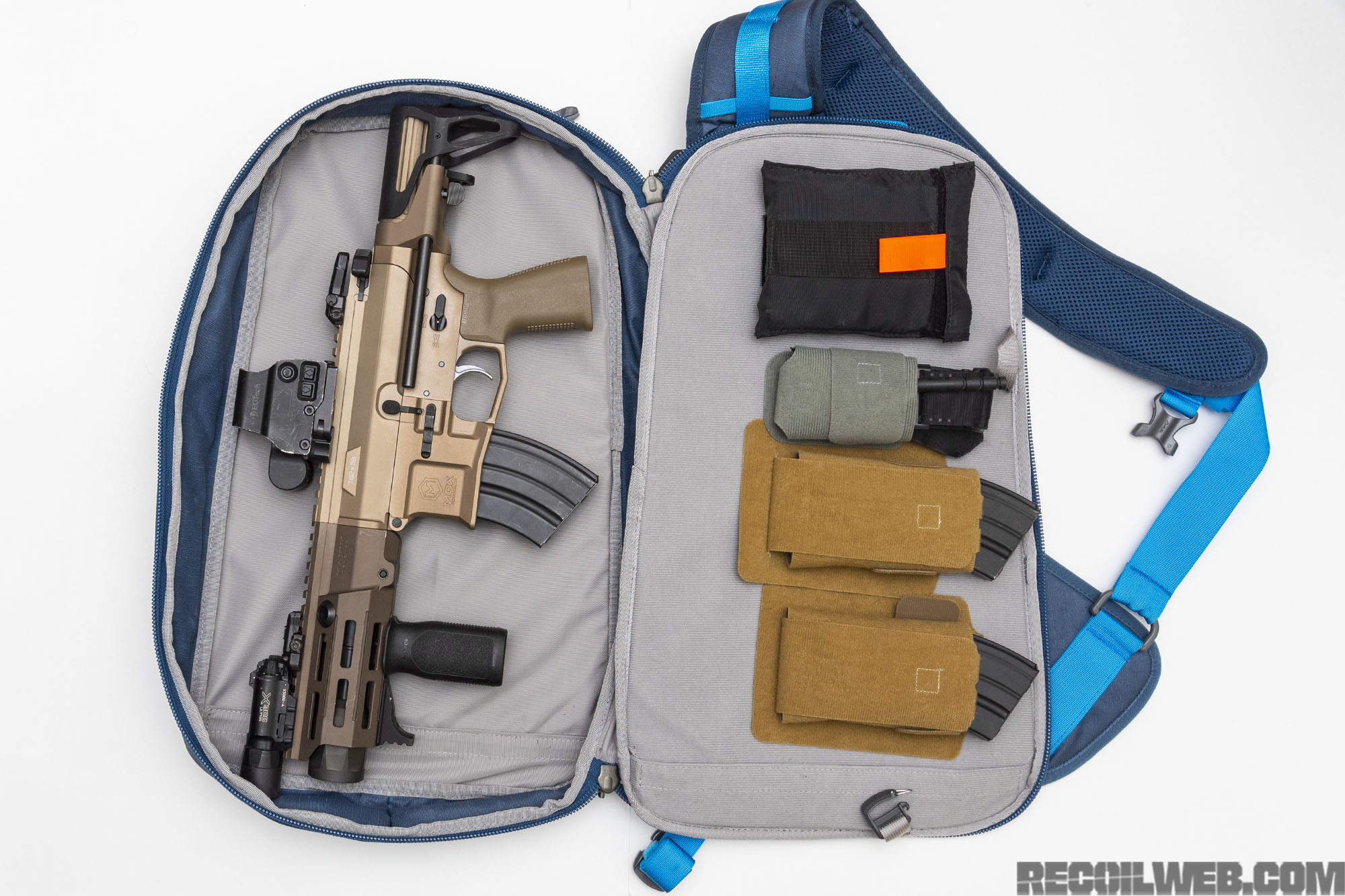 In order to deploy your CCW of choice, simply spin the bag to the front or side, grasp the large zipper pull, and go. Deploying the Commuter is easier and speedier than any other bag of its kind that can also easily accommodate a short rifle.

One downside of this bag is that it's made for right-handers. We suspect this concession was made for comfort since we've yet to find a sling-bag that's both comfortable and ambidextrous (if you have one–shoot us an email and let us know!)

We've used this bag almost every day for the last 60 days, so we're confident in saying it's a near perfect EDC bag. It holds the essentials, a 16-inch laptop, armor, and a rifle, all without telegraphing its contents in any way. The only way to make it more discreet is to engraving an Osprey logo on it, and swap out the Vertx branded zipper pulls… something we're considering.

Ever gone grocery shopping with a rifle on your back? We have–and we weren't hanging out with those Target-shopping, weirdo, open-carriers either. 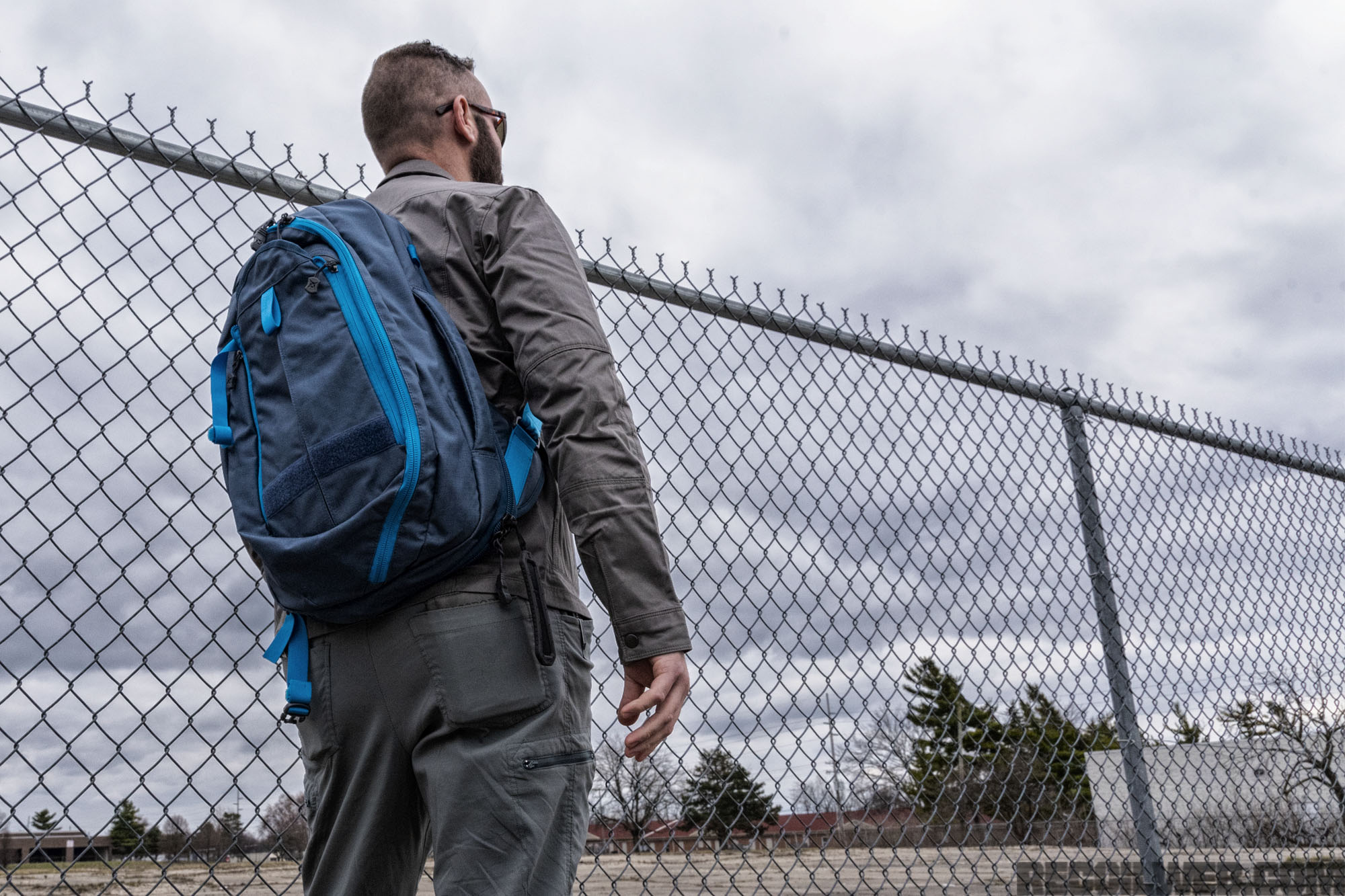 [Check out RECOILtv's video from SHOT Show 2020 below]