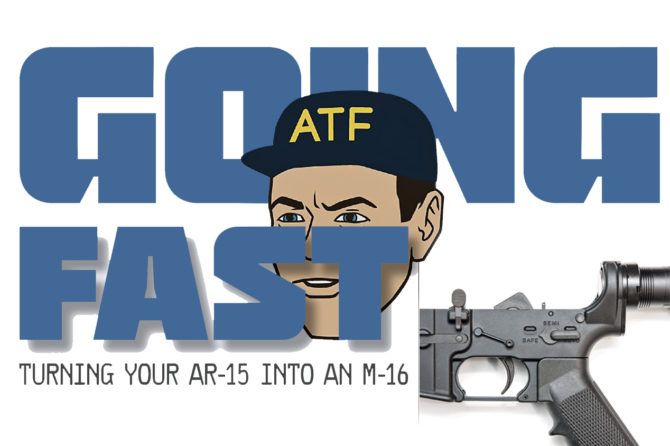 Legal Warning: The following article is for educational and informational purposes only. Building a machinegun in the United States is illegal unless the builder happens to be a Special Occupation Taxpayer and manufacturer.

In late 2017, in Issue 34, I wrote an article about the various “full-auto simulators” that were available at the time. In a tragic twist of irony, I was putting the finishing touches on the story when a mass shooting occurred that made some of the products (bump stocks) I wrote about illegal under federal law. In the time since then, I’ve seen thousands of examples of folks on both sides of the debate consistently misuse terms and get basic facts about the operation of a machinegun, or even a semiautomatic rifle completely wrong.

This is somewhat understandable as manufacture of new machineguns for civilian use has been illegal since 1986 when the NFA (National Firearms Act) registry for new machine-guns for the civilian market was closed. As a result, most firearm enthusiasts and even experts who came of age in the past 35 years have little firsthand knowledge of inner workings of machineguns. There are exceptions of course when it comes to military armorers, federally licensed Special Occupational Taxpayers (SOT) who manufacture new machineguns for government use and those of us who read old books and manuals to grasp a better understanding of how things work. To educate the public, I thought I’d take a look at the various ways to make an M-16 from an AR-15. Again, unless you’re an SOT building a post-1986 machinegun, using the information presented to make one of these items is illegal. Please do not break the law. I’d hate to see good gun people go to prison and, even worse, they don’t let you read gun magazines in the federal prison system, or even browse our website!

Apart from enlisting in the military, becoming a SWAT officer, or signing up as a private security contractor where you may be issued an M-16 for an extended loan period, your sole recourse for obtaining an M-16 is buying one. With the cost of a transferable M-16 being more than $20,000 these days, this article is intended as a guide to what you’re buying if you’re considering a registered conversion part over a dedicated machinegun.

When most SOTs want to build a real M-16, they obtain the appropriate parts, source a proper receiver, file a Form 2 with the ATF, and when it’s approved, they put it all together.

The most common way is to buy the actual M-16 fire control parts and install them in a lower receiver. Most lower receivers need to be modified by drilling a third hole to fit the auto sear. What separates a registered receiver has a third pin hole to house the auto sear.

Before you start thinking about becoming an SOT “just to build machineguns,” bear in mind you have to be an actual firearms manufacturer, obtain a Federal Firearms License, Taxpayer ID Number, apply for an SOT status, pay all the appropriate fees, including a couple grand to the State Department for ITAR compliance, and be in the business full time. When you give up your license, however, you need to sell, destroy, or turn in your post sample machineguns. One of the first methods of converting an AR to fire full auto is to install a part known as a Drop-In Auto Sear, or DIAS. The DIAS requires an M-16 hammer, selector, and bolt installed in the rifle. The “Drop In” appellation refers to the end-user not having to machine the lower to accommodate an auto sear, as a secondary auto sear is part of the DIAS. 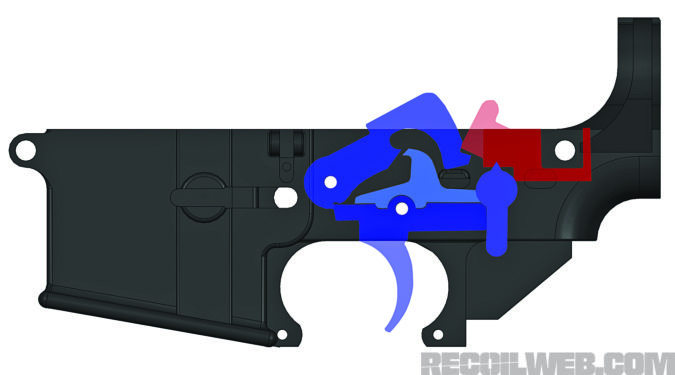 A DIAS doesn’t require a third pin hole, though some receivers will require some milling.

When a DIAS is installed in an AR lower, the hammer is cocked by the bolt carrier as it moves rearward. The carrier pushes the hammer down and the sear of the DIAS grabs the hammer. As it moves forward again, the carrier catches the top of the sear in the DIAS assembly and releases the hammer.
Transferable DIAS are referred to as Registered Drop-In Auto Sears or RDIAS.

Back in the late ’70s and very early ’80s (in retrospect this may have been the real “glory days” of firearms ownership in the United States), a DIAS was commonly advertised in Shotgun News or Gun List for about $150.

They more or less flew under the radar as ARs were still not a very common rifle; there was no internet, and there weren’t legions of firearms owners writing letters to ATF’s Tech Branch for clarification on what was and wasn’t legal.

M-16 fire control parts are legal to purchase and own, though we nary see a point unless you have an M-16.

However, before you start searching for one on the various auction sites or local gun shows, there’s a catch. You cannot legally possess one if you own an AR-15.

Essentially, this rule makes possessing a Pre-81 DIAS useless. It’s kind of like owning a set of keys to a Lamborghini without being able to drive the actual car. A further legal problem is compounded because none of these sears were engraved with a serial number to substantiate a date of manufacture. In court, the burden of proof is placed on the defendant and, thus, the prosecution presume the sear was made well after the grandfathered date. This makes the possession of this little part akin to owning an unregistered machinegun. Bottom line: Don’t do it!

Another fantastic invention that came about in the 1980s was the “Lightning Link.” Properly known as the S.W.D., Inc. Auto Connector, fewer than 900 of these were manufactured and in the NFA registry prior to May 1986. This is a drop-in part to convert a commercial AR-15 into a fully automatic firearm. There are a few caveats regarding the use of this device, however.

In theory, it’s a two-way conversion that’s installed and removed easily. It doesn’t give the shooter select-fire capability. Once it’s installed, the rifle is full-auto only. Not that there’s anything wrong with that! There are several manufacturers making kits to allow select-fire with the Lightning Link by modifying real M-16 fire control parts to function with the Lightning Link in an AR-15.


The other downside is that it’s a product of its time, meaning when it was designed, there were less than a handful of companies making AR-15s. The market share was largely owned by Colt and their SP-1 version of the AR.

That’s right, the Lightning Link only drops into a Colt SP-1 and a handful of other, early civilian-made AR-15s such as Bushmaster, Sendra, Essential Arms, and most PWA pre-ban lower receivers. After 1989, Colt added what’s known as a “High Shelf” in their lower receivers to prevent installation of a Lightning Link. These lowers can work if the shelf is milled away.

Many modern lowers have a “Low Shelf,” but they may not be rounded in the rear properly to accommodate a Lightning Link. Again, milling will be required to make it fit.

Lastly, the Lightning Link is a fragile piece of hardware. It’s not uncommon for these to break on extended use, and once they break, you’ve just destroyed an over $15,000 machinegun.

If you hold the trigger after a shot is fired, the sear will not catch in the hammer’s sear notch when the hammer cocks because the sear is depressed below the arc of the hammer notch. A Lightning Link looks like something someone came up with in their garage, which isn’t terribly far from the truth. Using one in a modern rifle requires some tuning and other work. At first glance, the Swift Link appears to be a little more robust than the Lightning Link and seems to be more user-friendly regarding compatibility with different lower receivers. The only other requirement seems to be the use of an M-16 bolt carrier. It looks like it would work much like the Lightning Link by depressing the disconnector when the bolt closes and releasing the hammer to enable full-auto fire.

I have no hands-on experience with this device and don’t even know the name of the original manufacturer. It showed up on a few internet forums and appears to have an origin as the result of a Freedom of Information Act request submitted to the ATF with regard to the October 2017 shooting at Mandalay Bay in Las Vegas.

Questions remain as to whether the shooter actually made the device and used it, or if it was the image of a prototype found on his computer.

An interesting variation of the Swift Link is one that was made by Ben Winslett (a firearms manufacturer and SOT) out of a coat hanger. Inspired by images of the Swift Link, Winslett was searching for suitable materials in order to make a version of his own. He twisted a coat hanger into shape and registered it on a Form 2 as a “Coat Hanger Machinegun.” Yes, that is a bent-up coat hanger, properly registered as a post-sample machinegun.

This type of device has been talked about in NFA circles for years, with some referring to it as the “Afghan Coat Hanger Conversion,” presumably because some Afghani fighter got tired of firing AKs and happened upon an AR that he converted using this method; or perhaps it was a PMC that was issued an AR. Regardless, Winslett’s conversion is the first case we’ve seen of one being made legally and legitimately.

The Swift Link and the Coat Hanger Machinegun work on a principle similar to the Lightning Link, but in reverse. Rather than playing the game of “capturing the hammer,” these conversions simply push against the disconnector. As you can see, there are a variety of ways to convert an AR-15 to full auto. Many of these methods were conceived pre-1986, because contrary to popular belief, M-16s weren’t exactly the staple of every gun shop as some revisionists might have you believe. In the past 33 years very little has been done as far as experimentation, and what little that’s been accomplished is almost solely in the realm of SOTs.

While some of these registered conversions may sound a little wonky when it comes to timing them, fitting them to a receiver, and in some cases, their fragility, finding one may be the only route to legally obtaining a full-auto AR for under $20,000. These prices are escalating in step with everything else full auto as there are only a finite amount in the NFA registry. At one time, a registered Lightning Link could be had for as little as $200. Thirty years later, they’re going past $15K.