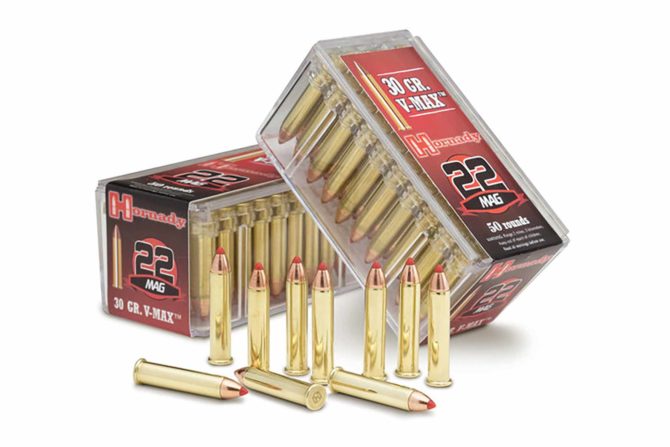 Pick the right .22 Magnum ammo for the job with one of these five top options, for everything from hunting to plinking to self-defense.

.22 Magnum ammo has come a long way since its introduction. It's had to. Today’s guns chambered for the cartridge run the gamut from bargain-basement 2-inch barreled snub-nose revolvers to full-size, long-range precision rifles that can cost thousands of dollars. Because a great deal is thus asked of this little cartridge, .22 Magnum ammo must be capable of performing at both close quarters as well as way the hell out there. Ammo makers have responded, offering options specially tailored to their tasks. Here are the best .22 Magnum options for hunting and self-defense. Answering the call for dedicated short-barreled self-defense .22 Magnum ammo, Hornady released the very solid 45-grain FTX Critical Defense. Optimized to kick the bullet out at 1,000 fps from a 1.875-inch barrel, this load hits hard from the lightest handguns. And Hornady has done its best to ensure terminal performance, topping it with its FTX (Flex Tip) bullet. Similar to the centerfire loads from the Critical Defense line, the FTX bullets overcome the problem of erratic expansion due to hollow points becoming plugged by intermediate barriers, such as clothing. The solution? The HP cavity is already plugged with a soft polymer, making certain that in most circumstances the bullet reaches its maximum expansion diameter. Speer’s Gold Dot line of cartridges are some of the most trusted and depended on in the country when it comes to self-defense. As for their .22 Magnum ammo, Speer pulled out all the stops and delivered a reliably expanding, dedicated short-barrel load at a general velocity of 1,000 feet per second when fired from a snubby barrel.

This 40-grain load is one of the tougher ones and is a little bit snappier than Hornady’s offering meant for short-barreled guns, but it is still quite light in the recoil department. It can be used in rifles and works especially well with guns equipped with suppressors. While geared for self-defense, it can easily function at more limited ranges for varmint hunting as well. Another load from Hornady, the 30-grain V-MAX Varmint Express Rimfire is an amazingly accurate round. In my own use of this cartridge, I found that it was easily able to print sub-MOA groups when using a Ruger American Rimfire Target at 100 yards. Being a light, zippy round, it shoots flat for its effective range. Furthermore, once it's at its terminal destination, expect some wicked results. V-MAX bullets are renowned for their ability to massively fragment. This is to say, the 30-grain hummer can leave little more than grotesque memories of the critters it hits. A potent medicine for small critters, the Hornady ammo will hold its own again coyotes as well, though it might not be your first choice for running dogs, particularly coy ones that hang out at the horizon. This offering from Federal is one of the better general purpose loads of .22 Magnum ammo. With a 50-grain bullet and an average muzzle velocity of 1,530 feet per second when fired from a rifle, it is able to take all game up to and including coyotes. Though, where it excels is for meat hunters, with the heavier, slower projectile tending not to tear up the meat on little critters such as squirrels. While marketed as a small game load, it is also suitable for handguns, but obviously performs better out of a longer-barreled option such as a Ruger Single-Nine and the like. Don't expect the explosive terminal ballistics found in the lighter jacketed and weighted bullets, but also realize not every trigger pull on a .22 Magnum needs to turn a varmint inside out. Speed is supposed to be the name of the game with  CCI’s 30-grain TNT Green, but expect it to come in a bit slower than its advertised 2,050 fps in most rifles. Don't let this deter you from loading it up, however. The monometal load more than lives up to its TNT moniker. While the copper projectile offers deeper penetration than some traditional lead-core bullets, it still fragments enthusiastically – thank the hollow point's deep cavity for this consistent attribute. It also gives the bullet a unique characteristic of leaving smaller game such as squirrels less damaged and more edible, while polishing off the likes of coyotes with the best of them. For Prunies (Californians) looking for a bit of a do-all that contorts to their home state's demented hunting regulations, TNT Green fits the bill. Accurate and consistent, Norma's 22 WMR sends a 40gr jacketed hollow point downrange at a claimed 1877fps from a rifle-length barrel. We've been impressed by the centerfire loads offered by this premium European manufacturer, and their rimfire lineup is no different in terms of overall quality. As a general purpose round, it does everything well, without excelling in any particular area unlike some of the more specialist ammo listed above. If you're looking for a single load to cover all the bases, be it prairie dogs, gophers, squirrels or ‘yotes, this is one to stack deep.

One response to “Best .22 Magnum Ammo For Hunting And Self-Defense”