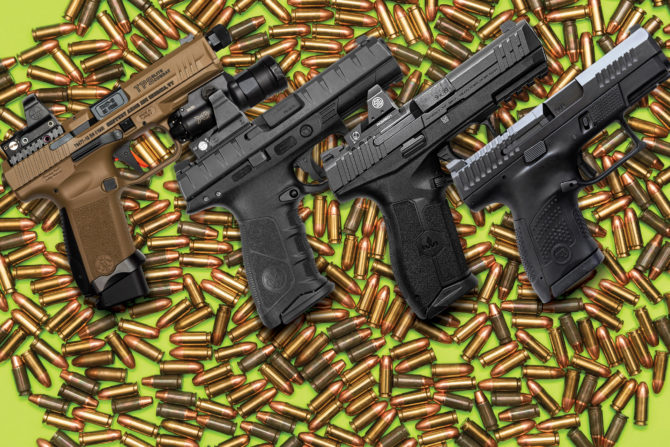 We’re a long way from 1980. Our manufacturing capabilities have seen light-years of advancement, not only in the past 40 years but also in the last five. Computer-controlled manufacturing and new software tools no longer solely serve the realm of Big Auto with billions backing them. Thanks to the inevitability of economies of scale and price reductions from competition, ever-smaller companies can afford access to tools once relegated to only the largest. And still more can stand on the shoulders of giants. As soon as one company figures out a complex problem, others will follow. Where to look to see this: go no further than the unsung heroes of the best CCW 9mm category.

This is happening in every industry, COVID-cutbacks notwithstanding, and firearms are no different. The cheapest and most inexpensive guns produced in 2020 are more reliable than nearly everything else produced 30 years ago. The quality-gap is rapidly shrinking.

One of the side effects is that we simply break fewer guns, and heaven only knows we try to do this in every issue. This increase in reliability is directly passed onto consumers.

Partially due to the rush to fulfill the U.S. Military’s Modular Handgun System (MHS) competition, and a big chunk due to these new capabilities, American consumers have access to higher quality, more robust handguns than any other time in human history — by an extremely wide margin.

The Gen 3 Glock is now a completely plug-and-play pistol, with endless parts and pieces available. And Sig Sauer has taken the chassis-system crown with their P320. But that doesn’t mean other pistols aren’t just as capable. There was a time when simply running for over 1,000 rounds sans malfunctions would essentially guarantee the success of any given handgun. But now the bar has been raised. Even with a bevy of modern options, such as OEM optic-cut slides, ambidextrous controls, and standardized accessory rails, the timing of a product release is still everything.

With empty shelves at your local gun store, you’re more likely to come across one of these less-popular pistols. Sure, you may not find a drop-in trigger for them on Amazon and your holster selection may be more limited, especially if you aren’t carrying with a weapon-mounted light, but many can and will do the work. Arguing for the best CCW 9mm can turn into a preference fight, but with so many options on the table, that's not a bad place to be.

Over the next few pages, we highlight some standouts that didn’t make it “big” for one reason or another. We’ve found all of them to be more accurate and reliable than their circulation numbers would otherwise imply, with advanced features such as optics-cut slides. We’d gladly carry any of them on our hips. The CZ P10C is, in our opinion, a tragically underrated carry pistol. It’s almost the least expensive pistol on this list, with a suite of well-thought-out features that outrun some of its competitors who’ve had generations of pistols to fix their oversights — and still haven’t. For example, the P10C comes out-of-the-box with steel sights featuring a tritium front dot and a plain serrated rear unit, equipped with a hard ledge suitable for one-handed slide racking.

This pistol also has one of the best CCW 9mm (if not the best) striker triggers from the factory that we’ve ever tested. Our sample gun consistently broke between 4 and 4.5 pounds with absolutely no modification whatsoever. It was designed from the outset to be compatible with Glock 19 holsters, though we experienced hit-and-miss results with this feature. Some brands of G19 sheaths fit the P10C like a glove. Others … not so much. This was a handy work-around at launch, but the P10C has been around long enough that at least a handful of holster makers now produce models specifically for this pistol. The stock frame texture is effective, the ergonomics a noticeable step up from other guns in this class, and the second-generation P10C introduced a swappable magazine release.

To be honest, we’re not really sure why the P10C isn’t more popular, especially now that there’s an optics-ready model. It checks all the major boxes for a modern CCW pistol, from a Picatinny rail frame to interchangeable backstraps, on up to ambi/swappable controls and an impressively refined stock trigger. For shooters looking to purchase a carry or bedside pistol that’s ready to go from the register, who have little or no aspirations of playing around in the aftermarket, the P10C is often our first or second recommendation.

CZ pistols have long carried a sort of gun-hipster reputation. They’re the sidearm you carry when you want a thoroughly modern, high-performing handgun but also want to buck the trend in a sea of boxy black pistols. Well-appointed and competitively priced, the P10C unfortunately remains a second-class citizen in a world of ever-more-widespread concealed carry.

See CONCEALMENT Issue 7 for a full review of the CZ P10C. IWI combined some of the best features of its competitors, intentionally or not, and incorporated them into the Masada. It’s the mating of the Sig Sauer P320, FN 509 Tactical, and Glock 19X. All these guns have something in common — versions of each were submitted for the U.S. Army’s 2015 XM17 Modular Handgun System solicitation.

While the truly ambidextrous FN 509 was announced in 2017, the red-dot-ready 509 Tactical wasn’t released until 2018; the main difference was that the 509T was optics-ready and came with a threaded barrel. As for Sig, one of the coolest features of the P320 is the serialized chassis, which can be removed from one frame and popped into another without any special tools.

The Masada has all of that too, though you’ll have to shell out a few more bucks for the threaded barrel. It’s truly ambidextrous with magazine release buttons and slide stops on each side — no need to disassemble the pistol to swap the mag release to the other side. Interchangeable backstraps accommodate small, medium, or large hands.

The Masada ships with mounting plates for the Trijicon RMR, Leupold DeltaPoint Pro, Sig Sauer Romeo1, and Vortex Venom, as well as a blank plate if you don’t want to run an MRDS.

As for plussing up on spare mags, it looks like your only option is to pick up factory IWI mags at $30 each. There’s
no aftermarket or common-design mag out there that fits
the Masada.

The Masada has many of the features of better-known, field-proven pistols, and it performs just as well. With so much potential for growth amid the hopeful release of different frames, the Masada could give the Sig P320 a run for its money as one of the best CCW 9mm handguns. And with the Masada’s $480 price tag — lower than any of the other pistols mentioned — we think the new offering from IWI is surely worth it.

See CONCEALMENT Issue 15 for a full review. Read it Here. The Beretta APX was designed and built as a contender for the Army MHS program, taking a bit longer to come to the civilian market than the other competitors. This was likely the fatal flaw for it. Though the first variant offered to civilians didn’t include an optics-ready slide or a threaded barrel, they’re now available.

For a striker-fired plastic fantastic, the APX’s trigger is pretty good. For 1911 fans, that falls somewhere between a custom-fit light trigger and an old-school USGI trigger that actually works. Call it better than a stock Gen3 Glock and a hair behind the new Gen5. That is to say, totally acceptable. The reduced-power spring drops the trigger weight to just over 4 pounds.

One wart to the slightly smaller Centurion and Compact models relative to the full-size is that the most popular WMLs simply won’t fit. No double CR-123 SureFire or Streamlight here, unless you want to rely solely on tension because none can reach the front lug. The Insight APS-C works out of the box though.

The APX has a striker release so the pistol can be taken down without pulling the trigger. Undoubtedly, this is in reaction to some law enforcement agency concerns about the need to pull the trigger on Glocks for a basic takedown. In practice, using this feature is cumbersome; you must hold the slide back slightly out of battery while simultaneously using a tool to depress the plunger. Better yet, just ensure it’s clear and pull the trigger in a safe direction.

Another nuance of taking down the APX that may seem unconventional to those accustomed to some other plastic fantastics is that you don’t lock the slide back to engage the takedown lever. However, if you’re familiar with the Beretta M9/92, you’ll be right at home. You simply release the striker, push in the takedown lever from the left, and rotate it down on the right. The slide comes right off. Once again, we’re seeing some of those Italian genetics now into one of the best ccw 9mm handguns.

See CONCEALMENT Issue 11 for a full review. Read it Here. We first got our hands on a Canik TP9SA at the end of 2014. At the time, it set the new standard for a budget-friendly pistol, but we still had some complaints, namely a quasi-decocker button built into the top of the slide — exactly where you’d want to mount a red dot. With the next revision, the TP9SF remedied that issue, along with several other ergonomic upgrades such as extending the ambidextrous slide stop and enlarging the magazine release.

Though Canik had an optics-ready pistol with the longer-slide TP9SFX and an OEM threaded-barrel variant in the TP9SF, it wasn’t until 2017 that they released what we’d consider their pinnacle pistol: the TP9 Elite Combat.

To make and design the Elite Combat, Canik teamed up with Salient Arms International. Starting with a TP9SFX, SAI contributed a nitrided, fluted barrel, a carry-conscious magwell, and fiber-optic sights. Canik also added a new aluminum flat-faced trigger with zero creep which cleanly breaks at 5 pounds, new +3 magazine extensions, and either nitride or nickel-coating on all internal components and small parts.

Unlike the other pistols mentioned here, Canik was thoughtful enough to include an OWB retention holster as part of the package deal — but we recommend skipping it as it features a trigger-finger-to-release system à la Blackhawk’s Serpa. A minor complaint we have is that the barrel is threaded in metric 13.5x1LH as opposed to 1/2x28mm. Sure, it’s a pistol from overseas, but even Glock and CZ now have ’Merica options from the factory.

The TP9 Elite Combat ships with four different adapter plates that easily accommodate most MRDS on the market, sans the Aimpoint Acro or brand-new Trijicon RMRcc. A standout feature of the Canik plates is that a small charging handle can be attached to either side; while normally we’d relegate that for gaming, it’s pretty handy. However, the plate doesn’t allow for iron sights of any kind, likely one reason it didn’t hit the market as hot as it deserved.

See CONCEALMENT Issue 5 for a full review of the TP9 SF Elite.