In January 2015, Europe was shocked by the massacre of 11 staff at the offices of Charlie Hebdo, and the subsequent murders of an unarmed cop and of four civilians at a Jewish supermarket. A terrorist cell allying themselves with Al Qaeda in the Arabic Peninsula (AQAP) engaged in a three-day running gun battle with French police and security personnel. They were eventually shot dead, though not before shutting down air and road transport in northern Europe. More events like this would soon take place, and from it, the need for a new weapon would be identified. The result: the B&T USW.

In the aftermath of the attack, law enforcement officials faced some sobering facts. The three Islamic terrorists claimed their actions were in defense of the prophet Mohamed, who had been defamed by the satirical magazine’s publication of supposedly offensive cartoons. In return for spilling ink, they decided to spill blood and tooled up with a variety of hardware sourced from the Balkans. Between the three of them, they had AK variants, a VZ58, Skorpion machine pistol, an M80 Solja anti-tank weapon, and fragmentation and smoke grenades.

This attack was unfortunately a prelude to another massacre that would occur in November of the same year. Three cells with three terrorists each used AKs and TATP suicide vests to kill 130 victims, injuring and maiming over 300 more. All of the terrorists had previously fought in Syria for Daesh before returning to Europe. 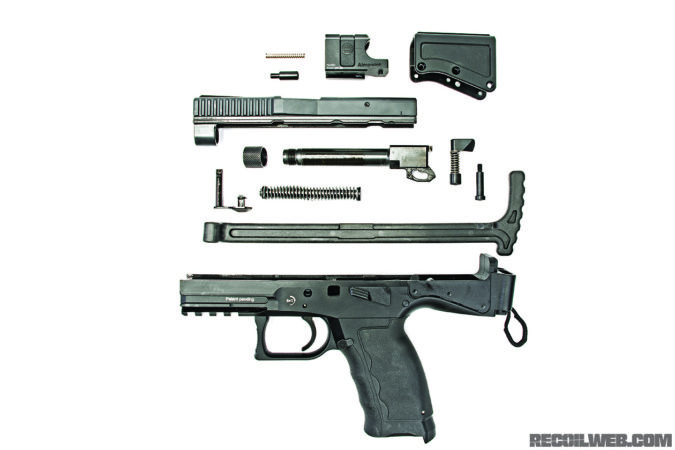 Adding an MRDS adds more components than you might think. Note frame-mounted bridge for Aimpoint Nano.

Faced with coordinated attacks from multiple cells armed with explosives and full-auto long guns, the average beat cop armed with a 9mm SIG SP2022 handgun was at a distinct, and fatal, disadvantage. One of the first to confront the Charlie Hebdo attackers was National police officer Ahmed Merabet. Hopelessly outnumbered and outgunned, he nevertheless bravely exchanged fire with the terrorists across a park before being wounded. While bleeding out on the pavement, his assailants walked up and shot him in the head.

Despite the hardware overmatch, there’s little political enthusiasm for officers to be routinely equipped with patrol rifles in Europe. While the sight of jocked-up cops at airports and railway stations has become commonplace, there’s a general antipathy toward the same image when transposed to the suburbs. Europe, in general, has a collective distaste for black-clad stormtroopers, and given historical precedent, it’s not hard to fathom why. What then could be done to level the playing field a little?

There’s a lot of empirical evidence from both operational deployments and the competition circuit to show that putting miniature red-dot sights (MRDS) on handguns makes it easier to connect with targets at longer ranges, versus relying on iron sights. Which isn’t to say MRDS’ don’t come with their own set of drawbacks, notably battery life and durability, especially when attached to the slide of a semi-auto. Most recently in the civilian world, the advent of pistol-caliber carbine division in USPSA has simply underlined what we’ve known all along — the fastest way to improve a pistol shooter’s scores is to hand them a rifle. Stocks > grips. The USW’s Sphinx origins are evident when compared to the SDP shown above. Although the forward cocking wings add weight, chopping and reprofiling the slide offsets.

Adding a stock to a handgun is hardly a novel concept. Churchill liked the Mauser C96 he used in the Sudan campaign so much he bought three more upon returning home to London. Through the years, various Luger and Hi-Power models have had stocks added to them. Proving that ideas never die and simply get recycled, modern-day versions can be found in countries with gun laws every bit as ridiculous as the U.S. — Israel being a notable example. There, a cottage industry has developed devoted to adding stocks and chassis systems to the one-handgun-allowed-per-licensee, most of which are fairly bulky and prevent carrying the result on a belt. The B&T USW takes a different approach, being designed from the outset to incorporate an MRDS and a stock, rather than bolting them on after the fact. The result, while bigger than a conventional handgun (after all, that extra hardware has to go somewhere) is surprisingly trim given the potential performance increase it offers. Using the Sphinx line of pistols as a starting point, the B&T USW gives the user increased hit potential with a package weighing less than most 1911s.

At its factory in Thun, Switzerland, B&T has carved out a reputation for building highly engineered designs and upholding the Swiss reputation for quality. The B&T USW continues in this vein — it feels solid in the hand without any snag points and sharp edges, while gaps and rattles are non-existent.

Whether by design or accident, the Sphinx pistol’s architecture handily lends itself to adaptation to the B&T USW concept. In terms of machine time, the most involved part of milling out a handgun frame is the grip area, as there’s a whole pile of chips that have to be removed in order to get a magazine in there. Until the advent of four-axis CNC machines, that long, square-edged hole had to be broached, which was both time consuming and required a lot of up-front investment in a single-use tool. Sphinx addressed this problem by means of a separate, polymer grip that was then attached to an upper chassis, in much the same way as STI’s line of double-stack 2011 handguns. Machined from simple bar stock, the upper part of the frame is comprised of rails and lockwork, and
it was a relatively straightforward process to extend the rear portion of the beavertail to provide mounting points for a hinge mechanism and MRDS. Functionality of the handgun remained unchanged — it’s a DA/SA design based on the CZ 75, and as such has been pretty well debugged in the course of the last 40 years.

The B&T USW’s slide differs slightly from the parent gun, sporting extended wings forward of the ejection port. This allows a secure hold during manual cycling, necessary as the usual cocking groove location at the rear is enclosed by a polymer bridge, which serves as a mount for Aimpoint’s Nano MRDS. These wings add mass, so material is removed elsewhere in order to keep the overall weight the same — the slide’s height is slightly reduced, and it’s chopped square just rear of the firing pin stop. Slide to frame fit is typically Swiss, and there was no discernible play in our sample when pressing down on the barrel hood area.

A word on that MRDS mount: Any initial misgivings we may have had about a plastic component in such a critical role were allayed on closer examination. It’s hella stout and closely fitted to both the frame and slide: if you should stress it to the point where it flexes, any movement will be stopped by steel, and it’ll spring right back. We honestly can’t think of an impact where it would fail before one of the other major critical assemblies.

Looking to Turn Your Glock or SIG P320 into a USW?

Mounting an MRDS to the frame conveys a couple of advantages. First, any battering caused by sudden changes in direction as the slide cycles is completely avoided, leading to improved re- liability of delicate electronics. In fact, B&T is so confident in the robustness of the Aimpoint Nano, that the gun isn’t equipped with iron sights. The second advantage is that it’s much easier to track the dot through the firing cycle, as it doesn’t whip back and forth on the slide. The Nano has Aimpoint’s usual battery life, i.e., install a decent lithium cell, then change it when you change presidents. Its window is smaller than, say, a Trijicon RMR, so presentation is more critical. But the dot is crisp and the optics clear.

The second component, which serves to increase the B&T USW’s hit probability, is, of course, the stock. It’s
a simple glass-filled nylon strut that hinges to the right and lies tight to the slide when folded. A Magpul PRS it’s not, but it does provide two additional points of contact when deployed. In order to bring it into action, the user pokes a catch on the dust cover with their right index finger, and a spring- loaded plunger in the MRDS mount kicks it open. This spring isn’t sufficiently powerful to send it into the locked position, but it gets it moving to the point where it can be snagged on the shoulder and flicked past the locking detent. Between the stock’s hold-open catch and pivot is a lanyard point, which can be used either to secure the weapon or to attach a sling if you wanted to run it like a stockless MP5-K, while awaiting a tax stamp. The remainder of the controls are vanilla. There’s a left-side-only slide release, which can be easily manipulated with the index finger if you’re a lefty, along with ambi-decocking levers and a reversible magazine catch. This feature set, teamed with replaceable back- straps, ensure the B&T USW will fit about 95 percent of the population. And the ones it doesn’t fit wouldn’t be in this line of work anyway. About the only improvement in this area we could find relates to the double-action trigger, which is heavy, crunchy, and stacks badly at the end of the stroke. Experience has shown just how silky smooth CZ triggers can be made, so the only reason we can come up with for the oversight is that it’s a service weapon and designed to light off cast-iron commie primers while submerged in mud. By contrast, the single-action pull is sweet, with a crisp, 4.5-pound break, short tactile reset, and just a bit of overtravel.

Given that the addition of a simple stock and MRDS increases the weapon’s profile, the obvious question is whether the juice is worth the squeeze, given its intended role. Realistically, you’re not going to carry it in an IWB rig (though OWB under a jacket is perfectly feasible). But that was never its purpose.

As a pistol, it works just like any other full-sized DA/SA duty gun, such as the SIG P226 or Beretta 92, with the same capacity. Red-dots take some getting used to if you’re comfortable and familiar with using iron sights, but it’s way easier for complete newbies to grasp the concept of putting the dot on place where they want the bullet to go, rather than the counterintuitive notion of ignoring the target and focusing on the front sight. We passed the B&T USW around the attendees at RECOIL’s Summit in the Sand event, and, used as a handgun, shooters had no problem banging steel at 140 yards. Add
a stock to the mix, and you can add another 50 yards to that distance.

Due to the insane restrictions of the National Firearms Act, the B&T USW has a limited role in the USA. As a peon, you could add one to your collection, then file a Form 1 to turn it into an SBR and, while the wheels of bureaucracy turn, employ it as a very accurate pistol. Unfortunately, once registered as a short-barreled rifle, it then becomes more complicated to take across state lines. As a LE or government user, it definitely stretches the performance envelope of a handgun without getting into rifle territory. And as a vehicle to demonstrate the benefits of frame-mounted red-dot sights, it’s a landmark in small arms development. You saw it here first, but we confidently predict that this is the future — look for further product introductions from other manufacturers where red-dots transition from the slide to the frame, and they’re integrated into handgun design from the outset, rather than being thrown into the mix as an afterthought. In this, the tiny Swiss firm of B&T is leading the way.