Sometimes it feels like Israel only produces ridiculously cheesy plastic products, but that’s increasingly changing. When we first saw the bulky Recover Tactical add-a-rail grip replacements for Beretta M9s, we were nonplussed. But they quickly followed that up with the slickest Glock rail adapters for Gen1 and 2 pistols and caught our attention. At SHOT Show 2020, we got handsy with the Recover Tactical 20/20 Glock stabilizer kit and knew we’d have to have one for ourselves.
There’s a lot of good along with some weirdness, plus a bit of complicated legal gray area to discuss.

Before just throwing a pistol in the Recover Tactical 20/20 or any other pistol-brace-chassis, bear in mind that some law enforcement agencies may then consider your pistol an unregistered short-barreled rifle.
Braces have been a contentious subject over the last several years, with the BATFE’s seesaw “reinterpretation” regarding the legality of shouldering a braced pistol. There’s some talk of more shake-ups on these, but this is the best of our knowledge at the time of writing. Per nonpublic internal memos between the DOJ and BATFE that multiple sources have reported, at the time of publication there are several ways they may determine and make a case that someone is intending to violate the NFA:

Weight
If a pistol isn’t considered heavy enough to require a brace, it could be used as an argument that a brace isn’t required. We’ve heard two different numbers (36 and 40 ounces unloaded), but remember these aren’t laws but arbitrary figures. 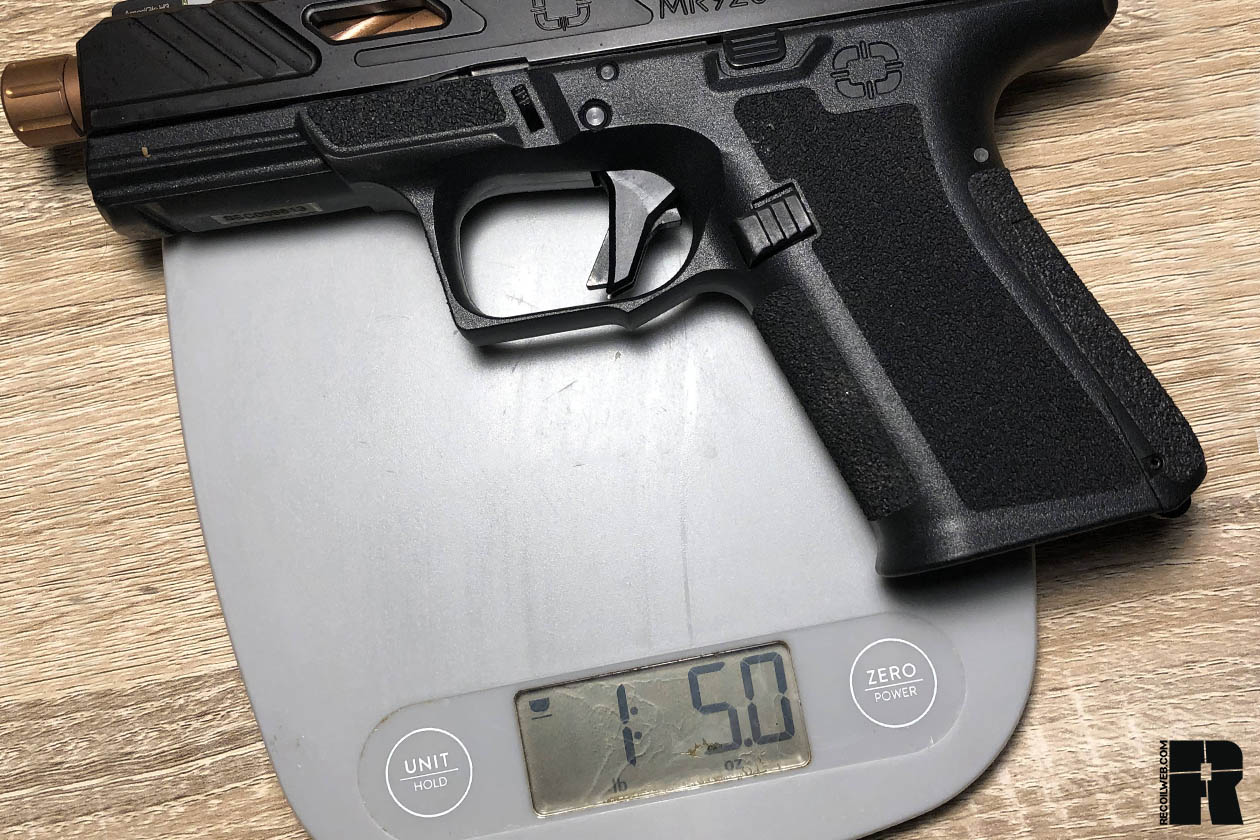 Length of Pull (LOP)
Even though this argument didn’t hold up in federal court (U.S. v. Wright, 3:18-CR-162), many brace manufacturers still follow this one. Braces with an LOP longer than 13.5 inches were determined to be intended to shoulder, regardless of varying heights and other body mechanics of the specific individual. Ultimately, this means that braces are less usable as buttstocks, but we came up with some workarounds that we discuss in this article. Accessories
This is the most well-known category in terms of proving intent, specifically regarding front vertical grips. A 90-degree VFG installed on a pistol is legally considered an Any Other Weapon (AOW), which we like to call the “catch all” category of the NFA. However, many years ago the technical branch of the BATFE determined that an angled grip, such as the Magpul AFG, was legal. In terms of increasing efficacy on a short gun, that AFG won’t do much for you. Some companies have released VFGs with slightly shallower angles than 90 degrees with the assumption it would be legal. The bigger issue now concerns optics. If you’re using an optic with such short eye relief that it’d be impossible to use at arm’s length while braced and only could be shouldered, this could potentially be used as an argument for intention of creating an unregistered SBR.

None of this should be considered legal advice; the problem with basing designs on determination letters and internal memos is that they’re subject to change at any time, for any reason, and without public disclosure. And you never know when you might have a run-in with someone who doesn’t know the law. You may beat the charge, but you can’t beat the ride.

To avoid any potential legal issues, we did the same thing that we did when we covered Glock stock and brace conversions in RECOIL Issue 44 — we simply used a Glock receiver already registered as an SBR. The additional bonus was that we didn’t have to worry about any weird internal memos. We were also able to take off that stupid Velcro strap.

DESIGN AND INSTALLATION of the RECOVER TACTICAL 20/20

The design of the Recover Tactical 20/20 is currently the most universal Glock carbine conversion on the market; it supports all double-stack 9mm/.40 frames, provided there’s a front accessory rail. More than 40 models are compatible, from Gen 3 to Gen 5.

Putting your pistol inside the Recover 20/20 is breeze. First, ensure the brace is folded. Next, bust out the included hex key and remove the large screw on the left side of the chassis. Once the screw is removed, the entire clamshell can be opened.

Line up the notch from the front accessory rail on the dust cover with the corresponding nub on the Recover Tactical 20/20 and the beavertail with the rear. Then, close the clamshell and torque down the hex screw. The entire process takes approximately one minute. If you want to add a Picatinny rail to either side of the chassis, they must be installed prior to the pistol. But there are some downsides, most notably that your new accessory rail is significantly lower than before. Unless you have fingers like Les Claypool you can’t easily activate a WML.

There’s a push-button on the left side to fold the brace, which locks in place via a friction lock. The easiest way to deploy when folded is to simply grasp the top of the brace and pull up and away from the chassis; it’s easy once you do it a couple times.

Bundled with each Recover 20/20 is a set of charging handles that you can add to the rear of the slide. These two-piece mounts are easily grasped and a nice addition, though they’re more critical on the empty-chamber Israeli market than in America. You can’t use the charging handles if you don’t run an OEM slide or if you run an optic. Recover Tactical should offer these as optional purchases or use a backplate conversion, like B+T with their Glock chassis conversion. But no matter, any optic you mount is ample enough as a charging handle. There are several kits available, and all come bundled with the charging handles. Other kits include additional items such as rail attachments, slings, pistol mag attachments, and holsters. We have the entire kit, minus the forward angled magazine adapter. The inclusion of a holster was an excellent touch by Recover Tactical. It can be hard enough find a holster for your light, let alone a chassis system. The holster itself is very minimalist but allows for cant adjustment. It’s a paddle, not our favorite by any stretch, and while it’ll clear a Picatinny rail installed on the left side, nothing can be mounted on it and still be holstered. Retention is from standard friction, so it’s not suitable for anything like duty use. But monkeying around at the range with friends? Absolutely. While it leaves a lot to be desired, we applaud Recover Tactical for even including one in the first place — you certainly won’t find one for it at your local Cabelas. QUIRKS AND WEIRDNESS of the RECOVER TACTICAL 20/20

Though most of the Recover Tactical 20/20 is fairly intuitive, it has some idiosyncrasies. When the chassis is installed, you no longer have direct access to the pins and takedown levers; keep that in mind if you need to remove your slide or perform other maintenance while on the range.

Because the brace only has a length of pull of 13.5 inches, factory irons are nearly unusable if you shoulder it. The Recover 20/20 is an odd duck in that it almost works better in brace-form than from the shoulder. But all is not lost. You can get away with a shorter LOP provided that your optic sits tall. We first discovered this when using the B+T USW Glock conversion and the P320/M17 Flux Defense MP17 conversion when preparing the Glock Stock buyer’s guide in RECOIL #44.

Red dots milled directly into the slides, like irons, are too low to comfortably use with the Recover 20/20. Our Grey Ghost Precision slide with a Deltapoint Pro was too low to be unusable. The first solution we tried was to raise the dot by combining an OEM slide with a Strike Industries Glock Universal Mount (GUM). The GUM interfaces and locks down to the standard rear sight dovetail, accommodating any number of MRDS footprints. And of course, it raises the optic. To play around with the concept, we tossed a Swampfox Kingslayer on top.

While the Strike Industries mount did indeed raise the height over bore and make the Recover Tactical 20/20 easier to use, it still wasn’t enough. We’d have to go full skyscraper. Since we weren’t exactly sure how high we needed to go, we decided to experiment as cheaply as possible. And we do mean cheap. A random Chinese company by the name of TuFok on Amazon sells a Glock rear-dovetail-to-Picatinny conversion for just under $20. But even if the hardware was bad, it’d serve as a proof-of-concept and we’d only be wasting a few bucks. So, we ordered it.

The Picatinny adapter is two-piece, with one that inserts into the rear dovetail and a rail that screws down into it. The hardware was soft and wholly unsatisfactory, so we replaced them with some Grade 8 machine screws. The body of the adapter is similarly cheap, milled from 6061 aluminum. We have no illusions that this mount will stand the test of time — we just wanted a workable solution.

Factory slide + Picatinny adapter + MRDS rail mount + MRDS makes for a tall package indeed. And you can use the gun shouldered.

Of course, the real solution would be to simply have a longer brace. There’s space on the Recover 20/20 to allow for another few inches. We considered grafting it longer, but perhaps a strong 3D-printed replacement part is in order.

After figuring out how to get a natural sight picture while shouldered, our next hurdle was a viable weapon-mounted light solution. We wish we could tell you we figured out something that wasn’t kludgey and bulky but was both bright and easy to use — no dice. The most comfortable setup was also the most awkward: a SureFire M300 Scout Light simply stuck on the left-side rail. While it’s still feasible for off-body carry, there’s no way anyone this side of Shaquille O’Neal could conceal it comfortably on their person. In for a penny, in for a pound, we decided to add onto the bulk with the addition of a Liberty Suppressors Centurion silencer and a stubby VFG. The VFG actually helps when shooting, simply because there’s no other spot to place your support hand when firing. It also makes the WML simple to manipulate. You can use a two-handed grip, but it’s strange when a stock brace is in your shoulder.

The Recover Tactical 20/20 won’t increase the inherent accuracy of your pistol — that’ll depend on your slide/barrel/ammunition combination. However, the additional points of contact will allow a shooter to greatly enhance their stability when not firing from a sandbag or rest. More support equals tighter groups and longer practical ranges.

While the skyscraper 1.75-inch height over bore made finding an ideal ballistic solution for zeroing slightly more difficult, a 10-yard zero gave us no more than a maximum deviation of 6 inches out to 150 yards. We had no issues plinking on torso-sized steel out to that distance, but then the drops became unmanageable. Sure, this can be achieved with careful pistol shooting, but not this easily.

For all of the weirdness in design choices and ergonomic challenges, the Recover Tactical 20/20 pistol stabilizer is way too much fun to not have tucked in your safe. While it’s not a viable contender against the B&T Glock USW conversion chassis, the price point of under $100 makes it kind of a no-brainer. Given how Recover Tactical has been steadily releasing new and updated products, we’re sure the Gen 2 will be even better. [Editor's Note: This article originally appeared in CONCEALMENT #19 and you can watch it on RECOILtv]

What was Old is New Again: More on Pistol PDW's