[This article originally appeared in RECOIL #60]

We Make a VSS Vintorez at Home with a Liberty Suppressors Leonidas, on a Sunday

The VSS Vintorez used to mostly be discussed among Cold War nerds and wildcat reloaders — until 2007. It wasn’t combat footage, respect for the terminal ballistics, or appreciation of the design that first captivated public attention. Instead, the glory goes to the first-person-shooter game STALKER developed by GSC Game World and released that year.

At least one company has been showing off an American-made Vintorez for a couple years, but we’ve yet to see it come to market. We’re also sometimes cautious of one-off production when it comes to firearms. Ultimately, we wanted our build to be inspired by the Vintorez rather than an exact clone. Everything is off-the-shelf, all mods were done with hand tools, and our base rifle can go back exactly the way it was in under an hour. Winning all around.

The real VSS Vintorez shoots 9x39mm. This cartridge was conceptualized in the Soviet Union to be a dedicated subsonic, suppressed cartridge with better reliability and more mass and ass than subsonic 7.62x39mm at the time. Though there were several approaches to this silent sniper round over the decades of development (such as a 7.62x39mm projectile shoved into a 7.65x25mm case), the Soviets landed on a 7.62x39mm parent case necked-up from 0.311 inches to 0.365 inches (about 9.3mm) to accommodate much larger projectiles. 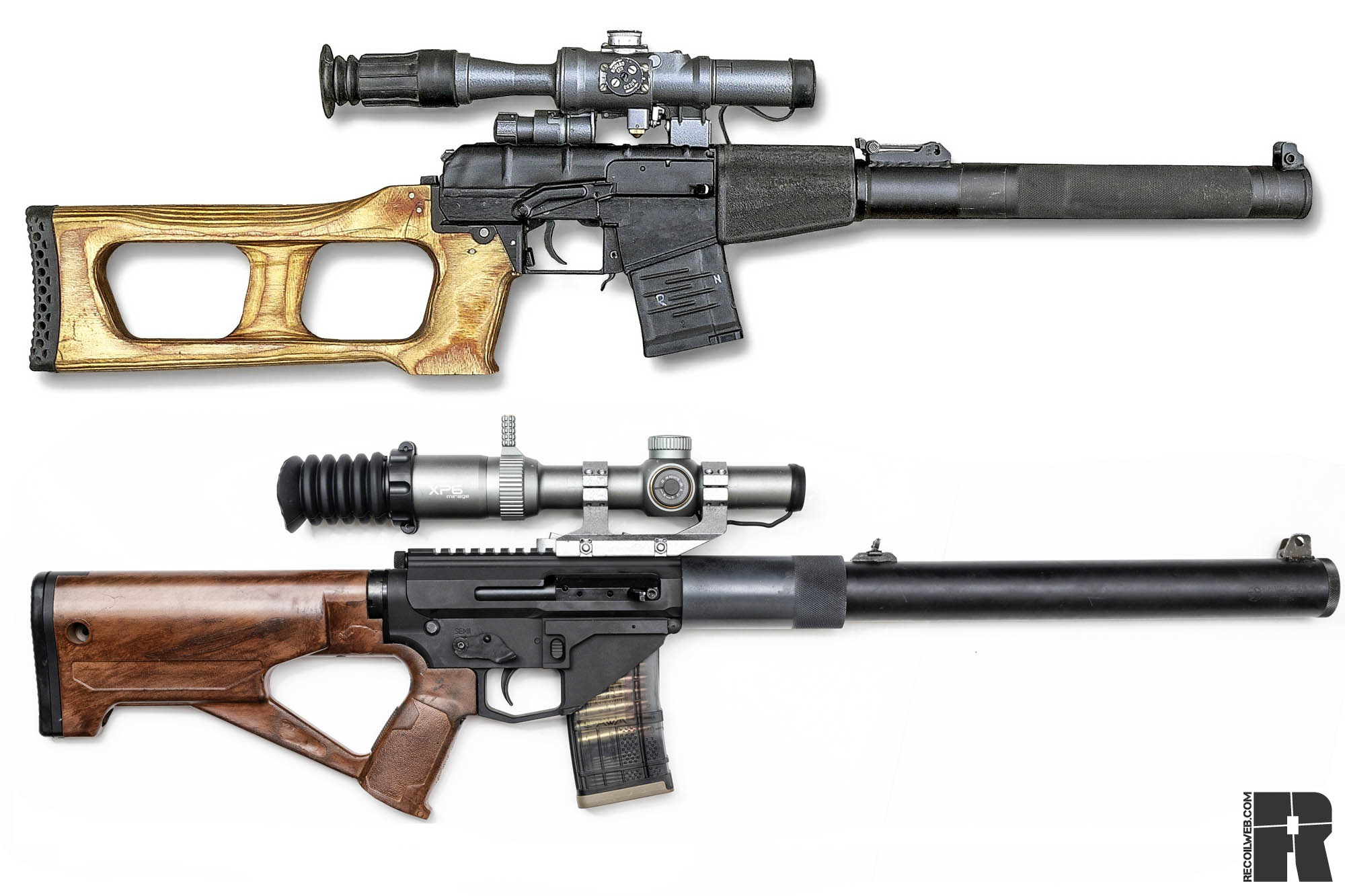 How much larger? Surplus 7.62×39 is most commonly found with 122- or 123-grain projectiles, with heavier loads like 154-grain occasionally popping up for sale, but 9x39mm starts at 248-grain and goes all the way to a whopping 278-grain. The reports on the armor-piercing variants are largely impressive, but we won’t see those stateside unless a foreign power is shooting them at us.

You can safely look at 300BLK as the SAAMI-spec version of JD Jones’ .300 Whisper, which in turn is essentially an American version of the 9x39mm. As opposed to necking up a 7.62×39, it only seemed appropriate that for 300BLK a 5.56mm parent case would be used instead.

Several years back Wolf Ammunition began importing 278-grain 9x39mm to the United States. There was one major problem: There weren’t any firearms in the USA that were capable of firing it. Even though it was derived from an AK case, manufacturers found it really didn’t feed or run well in AK-type rifles. It seems the Russians built dedicated rifles around 9x39mm (the VSS Vintorez followed by the AS VAL) instead of simply re-barreling an AK for a reason.

In a bizarre twist of fate, it was much simpler to develop a 9x39mm AR-15 than anything else, and Marc Krebs of Krebs Custom produced the first viable stateside firearm we saw. A small handful of other companies also produced rifles, with mixed results. But when it hit steel, you could tell.

Back in 2014, the Obama administration instituted a ban on importation of Russian-manufactured firearms, which expanded in 2017. With inexpensive Russian guns no longer available, the American market would answer with USA-made AKs. Similarly in September 2021, right as ammunition panic purchasing started to settle back to normal levels, the U.S. government halted all new ammo importations from Russia. As with AKs, we soon heard of more American companies producing 7.62×39 and 5.45×39 — the two most commonly used Russian cartridges.

Unless someone stateside saddles up to produce in quantity, 9x39mm will continue to be a mere curiosity rather than anything remotely practical — 300BLK is dirt common and cheap by comparison. While we’re sure a competent machinist with the right tools and free time would do a great job, we wanted this to be a project that could be completed on a long weekend day with off-the-shelf parts. Dremels, hacksaws, and paint would be the preeminent tools, but if you have a mill and a Cerakote setup, you’re on easy street.

In our minds, the best use of 300BLK is subsonic-only through a suppressed, short barrel. The Liberty Suppressors Leonidas is an integrally suppressed upper that pairs an 8.5-inch barrel with a permanently attached monocore. The Leonidas only requires a single tax stamp, with no federal permission slips needed to cross state lines. It performs exceptionally well with subsonic 300BLK, and importantly the long outer sleeve of the silencer closely matches the lines of the VSS Vintorez.

The main problem is that the Leonidas looks and acts far too much like a standard AR-15, so we had to make some changes. In lieu of 3D printing or purchasing airsoft Vintorez parts, we went with existing components for everything. An old-school DPMS free-float tube served as the short handguard seen on the Vintorez.

For the receiver, we decided not to risk anything of real value. We had a homebuilt lower that was just a little wonky (See RECOIL’s DIY book for our lessons learned) so it would be the perfect testbed for the plan — to hacksaw the magwell to make it more “AK-ish.” Similarly, we installed a short-throw ambi selector with a triangular selector fabbed for the right side. It works in “reverse” (flick-up-to-fire) to a normal AK, but it’s really not so bad to snap on safe. We swapped the included Seekins Precision upper receiver and handguard with an inexpensive Bear Creek Arsenal AK-ish right-side-charging upper receiver. We weren’t looking for excellent ergonomics — we’re mimicking Soviet design here — so the Bear Creek Arsenal upper was perfect. The swap itself took a considerable amount of time and creativity, as we had to do it without removing the permanently attached silencer core of the Leonidas. We managed to figure out a way to use the existing barrel nut on the BCA upper, but it wasn’t a sure thing. Liberty Suppressors also has a Leonidas conversion service, which we’d suggest for anyone who wants to do this themselves. You send in your barreled upper, and they sleeve/weld/finish from there.

The thumbhole stock from NC Star was simply the cheapest one we could find. It was only $35 online and, if we’re being honest, far more solid than a $35 stock should be. A fakelite makeover (learn how here) pushed it a notch above.

In order to mimic the 4x PSO-1 without having to find a way to attach piss-poor Russian glass to an AR, we chose the 1-6x Atibal Mirage LPVO. Why? Because it was already gray. We sprayed the mount with “hammered” paint to more closely mimic the PSO. For bonus points, we added a rubber front cover and a goofy UTG eyecup. The sights we attached to the suppressor tube came from a rando pile of old bolt action sights. They aren’t functional and are simply glued to the tube — welding, drilling, or tapping would involve permanent modification to a silencer, so we avoided it. Is our VSS Vintorez more practical than a stand-alone Liberty Leonidas? Not in the least. The short handguard means you’re scrunched up when shooting it. The thumbhole stock makes the safety manipulation slightly more difficult. The extraneous eyecup makes the Atibal Mirage harder to use.

And have you ever wondered why no one chopped the front of their magwells to look more AK-ish? It’s because it totally screws up your reloads. JB Weld is for nothing more than dress-up (the rear sight fell off after one range trip), so it’s a good thing our iron sights were never meant to be functional. If you want them to stay on, you’ll probably have to drill/tap or weld them.

But the “Vintorez at Home” is absolutely worth shooting and showing off to your friends. If you want the thwack of a really fat round on steel, go with an American big bore like .450 Bushmaster. If you want a practical integrally suppressed rifle? Stick with 300BLK.