KE Arms, Brownells, And Others Sued By Anti-AR-15 Investor 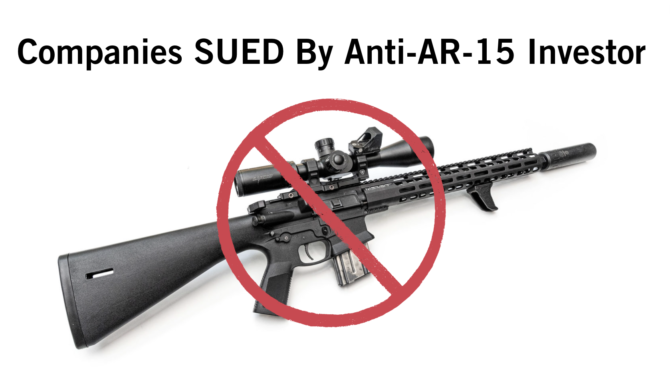 THE AMERICAN LEGAL SYSTEM: SUE THEM ALL, LET JUDGES SORT IT OUT

Many of you may be aware that we live in a time and place where lawsuits are common. If you’ve ever been unfortunate enough to be targeted by a lawsuit, you know how draining it proves.

Second Amendment supporters are no strangers to the legal system and often use it to preserve and protect our rights.

But that system can also be used against people.

Recently, KE Arms and Russell Phagan, along with Karl Kasarda from InRangeTV, have gone public regarding a lawsuit filed against KE Arms by GWACS Armory concerning the KP-15 polymer lower and the What Would Stoner Do (WWSD) project from InRangeTV and Brownells.

When Cavalry Arms closed shop, the molds and tooling were sold to Russell Phagan, who later sold them to GWACS Armory.

In 2017, InRangeTV launched their WWSD project and selected the CAV-15 MK II as their lower of choice.

GWACS did not hold any intellectual properties pertaining to the component's design or the WWSD project. The company purely produced the lowers using the molds developed by CAV Arms.

With the popularity of the WWSD 2017 project, GWACS quickly sold out of lowers. Once out, GAWCS went dark and then folded, no longer manufacturing the lowers and publicly posting about their exit from the market in 2019.

Upon GAWCS dissolution and seeing a market demand for monolithic polymer AR-15 lowers, KE Arms picked up the reigns and developed an entirely new design, new mold, new tooling, and new processes to produce the KP-15, and KP-9 polymer lowers.

Fast forwarding through the usual early legal jostling, GAWCS' present suit alleges KE Arms, Russell Phagan, et al. are in violation of a non-disclosure agreement, disseminating trade secrets and other claims in a case dragging on for over two years now.

As Kasarda points out, there are highly questionable and seemingly nonsensical claims to anyone with a grasp of firearm history. One such example he discussed in a YouTube video, is GAWCS asserting the M16A1 length of pull is a protected trade secret of the company… that it invented some 40-plus years after the M16A1 was fielded in the jungles of Vietnam.

If you’re as confused as I am, the lawsuit goes downhill from there.

A more complete rundown of the claims and their absurdity can be found in InRangeTV’s video.

Why is GWACS suing in the first place? While I cannot know the minds of other men, Kasarda does provide some interesting information in his video on the topic.

Per Kasarda, an angel investor is funding GWACS' lawsuit. Once a 45-percent owner of GWACS, one Reed Oppenheimer is now paying for this crusade against KE Arms et al. Per FEC filings, Oppenheimer is a Tulsa, Okla., businessman whose employer is listed as RJOF–presumably the Tulsa-based non-profit Reed Jules Oppenheimer Foundation.

So, what's Oppenheimer's interest in the case?

Apparently, so much so he is willing to singlehandedly fund this entire lawsuit.

It’s a strange stance to have when the company you’re funding's only product is… an AR-15.

If you’ve seen the movie The Usual Suspects (1995), then you’ll know who I’m talking about when I whisper the name Keyser Söze. The power of Söze’s name in the film comes from the fact no one truly knows who he is. A shadowy figure who is responsible for masterminding criminal enterprises. Think of him as the Wizard of Oz, but with a cooler name and a better movie.

That power, both the Wizard's and Söze's, is lost once a spotlight is cast and their identity revealed.

I doubt Oppenheimer is as diabolical as the Wizard or Söze. Still, I tried to find out more about the man who hates the Constitution enough to spend tens of thousands on a lawsuit to suppress the free exercise of the Second Amendment.

While the RJOF website is now defunct, seemingly pulled down just this week (we wonder why…), the WaybackMachine still remembers.

According to the old website, “The Reed Jules Oppenheimer Foundation (RJOF), a private, not-for-profit corporation founded in 2012, is the successor of several family foundations through that Reed and Gabrielle Oppenheimer and their children, Sophie, Eric, Meaghan, and Luke have supported a multitude of charitable causes since 1982.”

Looking at Form 990 tax filings for RJOF, the organization appears to basically give money to a range of causes – sometimes over $1,000,000 per year.

If we take a peek at Reed’s FEC filings, we see much of his donations go towards ActBlue and End Citizens United. But he is also a supporter of Chuck Schumer, a rabidly anti-2A senator from New York, and Senator Raphael Warnock in Georgia, who is also strongly anti-2A.

It seems to me that this paints a fairly clear picture.

KE Arms et al. are in a fight for survival. While many 2A causes deserve our support, supporting KE Arms also results in you getting some awesome monolithic polymer lowers.

Use code DEFEND2A25 to save 25% on KP-15 or KP-9 receivers purchased through KEArms.com.

I’ve been using a KP-15 polymer lower for a couple of years now, and I’ve loved it since day one. But I’m not alone at RECOIL; Dave Merrill and Iain Harrison both have reviews for you to check out:

If you’d like to read everything from their source, here are all of the links I can provide.