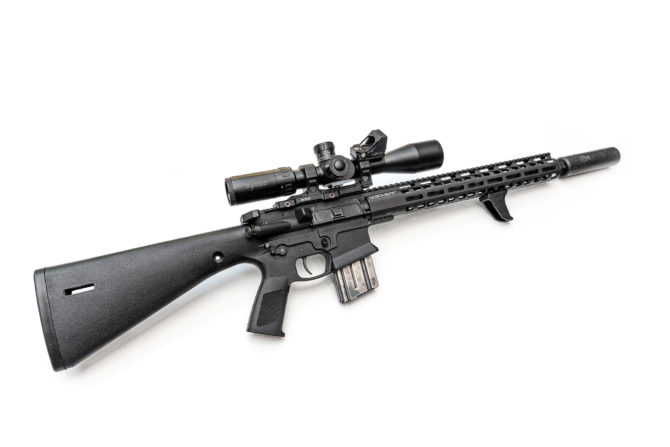 The major standout of this build is the complete KP-15 SLT/Ambi polymer receiver from KE Arms. Featuring an integral A1-length buttstock, the KP-15 addresses a common weak point with other synthetic receivers — namely, breaking right where you attach your receiver extension tube and buttstock. While it may seem strange to rock a fixed stock in absence of a federal assault-weapon ban, the A1 length is fairly universal, and the taller among us can easily pop on a buttpad.

The KP-15 is also featured in the InRange/Brownells What Would Stoner Do (WWSD 2020) project. You may have seen a similar receiver from the now-defunct Calvary Arms, but the concept of an all-in-one polymer lower started with Eugene Stoner himself. While Stoner didn’t find it viable at the time, we’ve had more than a few advances in materials science in the intervening decades.

Since this came as a complete lower, the internals are all KE Arms, with the excellent SLT-1 trigger included. The Sear Link Technology trigger maximizes energy transfer with the removal of the disconnector, allowing the selector to be placed on safe regardless of the hammer position, with a crisp break followed by a tactile, short reset.

The upper receiver is standard forged and came from a box o’ parts. There’s nothing special to see here, and the origins are unknown. The 4150 CMV, black-nitride, 16-inch, mid-length 5.56x45mm NATO 1/7 barrel was provided by DRG. Barrels are one of the categories where we sometimes have to scrimp and scrape during leaner times, so we were more than pleased to get our hands on a quality barrel.

The bolt carrier group is an AXTS (now known as Radian) black nitride model, with a hardened HPT/MPI 9310 steel bolt. While original specs call for bolts machined from Carpenter 158, 9310 and S7 steels have proven to be just as durable in this application and are often easier to source.

While Griffin Armament is best known for their silencers, they have an entire line of AR small parts and furniture. For this build, we used the latest M-LOK Low-Pro RIGID rail — the longest they had available to maximize our real estate with a 16-inch barrel. We kept attachments pretty slick, only adding an Emissary Development M-LOK Handbrake. The Handbrake is larger than a finger-stop or index point but doesn’t quite have the girth of a stubby VFG.

The silencer is a Gemtech Trek II. While it won’t knock anyone’s socks off with some new, yet unattainable level of sound reduction, the Trek II remains a relatively short, solid performer with direct-thread attachment and corresponding wrench flats.

The optic mount is a Strike Industries Adjustable Scope Mount (ASM), and there are a few features we’d like to point out. The ASM can be set for one of four different eye reliefs to maximize rifle and scope compatibility, and ours features a preproduction ring top-half replacement, allowing for red-dot mounting. A universal MRDS mounting base can be attached at 90 or 45 degrees and can accommodate most footprints. And if you flip the mount over, you can attach an Aimpoint Micro.

Tiring a tad from the LPVO game, we upped our magnification game with the Lucid MLX. Featuring Japanese glass, mil/mil adjustment, and a first focal plane optical arrangement so the reticle scales along with the magnification, the MLX checks a lot of boxes at a lower price point. While 18x magnification is more than we’d usually ask for a 5.56 rifle, having that higher end can be useful for lower-probability shots or simply helping a friend check a target. A spare Atibal MRD V3 red dot was mounted forward and at 45 degrees for close-in shooting and as a secondary sighting method.

The only future additions we envision are perhaps a bipod for stability and a mounted LEP flashlight to maximize nighttime non-NV long-range shooting. It’s not quite a kick-around do-all, but it’s a well-balanced shooter biased toward the longer end of the spectrum.