Nothing breeds desire like lack of availability. And while Browning Hi-Power production officially ended in 2018, the reality is that it had been years since any metal had been cut. Every few decades or so from the inception of the BHP, we see a resurgence in popularity. The last major push came from Israel; they exported the bulk of their surplus, and they made for cheap, frustrating, and fun longer-term project guns. Most of the Israeli guns were extremely rough (see RECOIL Issue 39 to see our Custom Mk3), so you didn’t feel bad beating them up. The decade prior was all about subpar clones from places where you’d best be advised to only drink bottled water.

Here we only knew that Springfield Armory made something “based on a Browning Hi-Power” without any further specifics. Sometimes opening a box with a new pistol makes you feel like a kid on Christmas even when you know exactly what it contains. Would it be all tricked out? An optics-ready slide and accessory rail ready to go play Modern Combat? Inside wasn’t something totally tactical, but instead a love letter to Browning. The SA-35 has been in development for more than two years; Springfield Armory started from scratch with this one. SA had to modernize the manufacturing, make a better and stronger pistol, and yet still remain faithful to the original. This is more difficult than you may initially imagine. These firearms were designed during a time when man labor was cheap, but machine time was relatively imprecise and expensive; in the 21st century, we have the opposite problem.

We decided to compare the Springfield SA-35 with two different Browning Hi-Powers: a Belgian-made classic blued FN with original internals, and a rough Hungarian FEG clone that has some Cylinder & Slide guts with a Novak cut. Springfield Armory didn’t just take old machine drawings and plug them into a CNC. They started with the blueprints as a rough guideline to bring the Browning Hi-Power to modern times. We’ve made an advance or two in metallurgy in the last century, and Springfield Armory certainly took full advantage. Just as with their 1911s, Springfield starts with raw forgings for SA-35 slides and frames to maximize strength and durability. Then, the slides, frames, barrels, as well as nearly all the small parts and pieces are precision CNC’d and then heat-treated with present-day methods. The two main complaints about the Browning Hi-Power are poor triggers and biting hammers. With a standard Hi-Power, the trigger cannot be pulled regardless of safety or chamber status unless a magazine is inserted. Not only does this needless complication under the guise of safety make the trigger pull worse, it also often means that magazines won’t drop free when released. The hammer, meanwhile, has been known to bite normal-sized hands to the point of bleeding.

If you currently own a legacy Browning Hi-Power, the first and easiest step you should take to improve it is to remove the magazine disconnect. Here, Springfield already did the work for you.

The OEM trigger on the SA-35 isn’t 1911 sharp (even John Moses Browning couldn’t make lightning strike twice, and he had to get around his own patents), but it is on par with a Cylinder & Slide trigger. The SA-35 trigger cleanly breaks at 4 pounds, 14 ounces and has shorter travel and reset than the original.

Springfield Armory also replaced the standard hammer with a ring hammer, alleviating most concerns of inadvertent injury just from using it. The safety selector and magazine release are standard righty-only, just like the originals. The safety on the SA-35 is much larger and more ergonomic than the original, all while keeping the classic lines — no kludge add-on here. 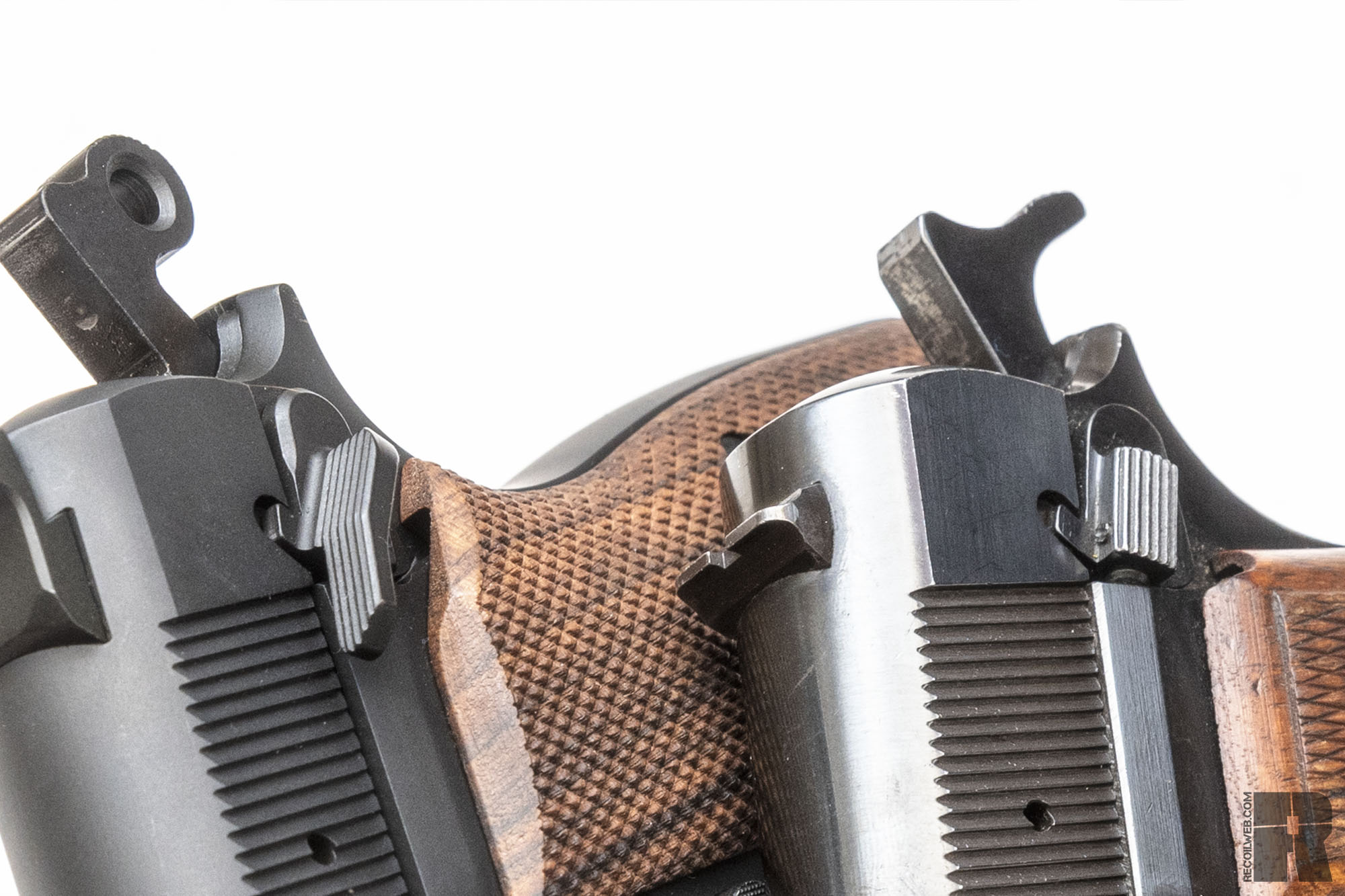 The Browning Hi-Power was one of the first major “high capacity” pistols, rocking a double-stack 13-round magazine. These days you can find more than that in a modern stagger-stack such as Springfield’s own Hellcat or SIG Sauer P365, but it was great for the day. While we’re not talking about some magical vast increase in capacity, the SA-35 ships with two flush-fit 15-round magazines. 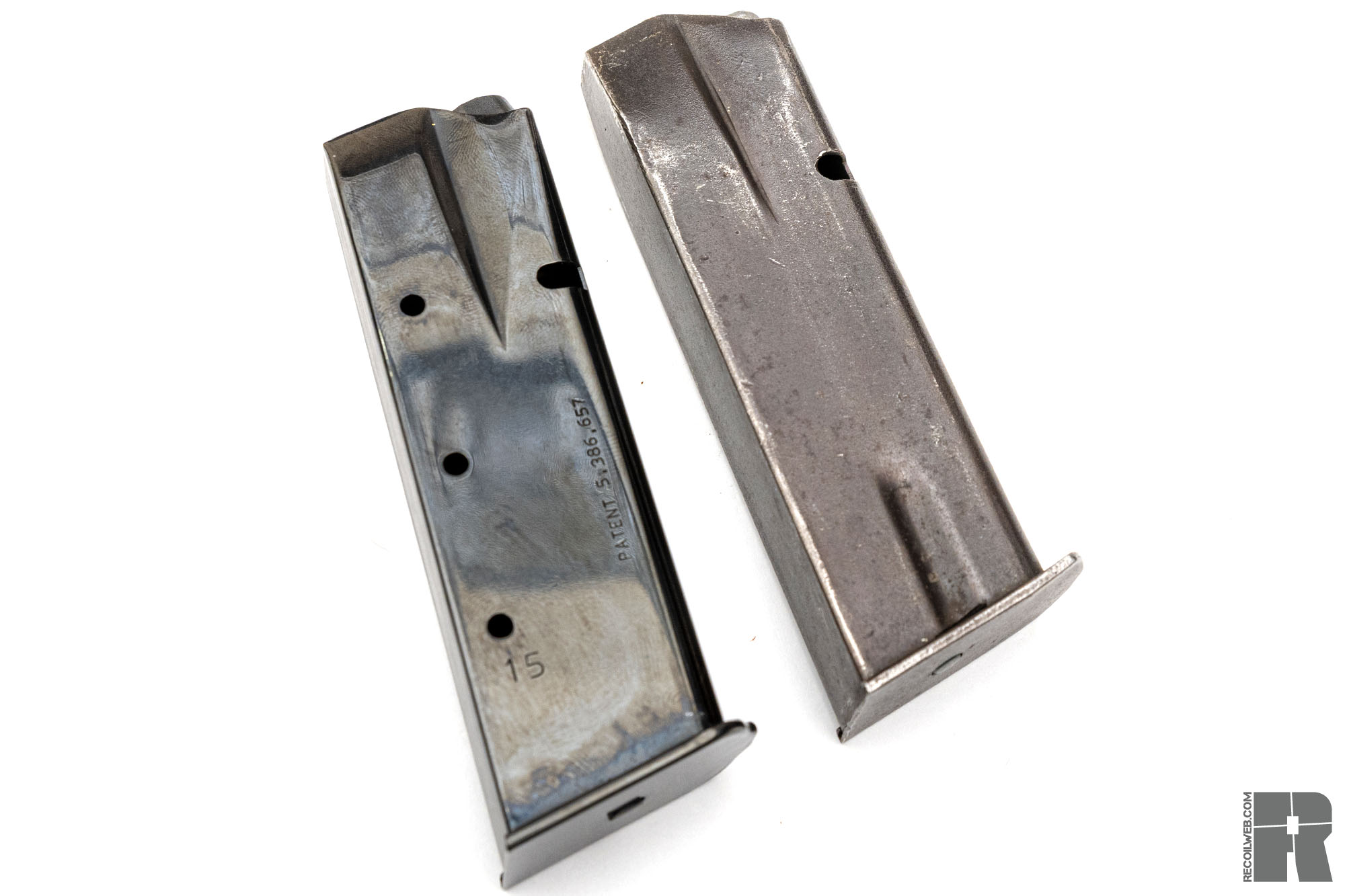 In the same family as the magazines is the magwell, and here Springfield paid some careful attention. You’re not going to find a big open-division ice cream cone of a magwell here, but you will find a conscientious bevel that aids in insertion. For a number of reasons, weapons and ammunition of yesteryear weren’t nearly as capable in terms of accuracy. Perhaps this is why pistol sights of the era are universally piss-poor; no matter, Springfield Armory put eminently usable sights on the SA-35, which were both clean and sharp from the start. The original, well-preserved, genuine Belgian-made BHP is practically a work of art. Battered and beaten over decades, the Israeli imports were rough. And the Hungarian FEGs are universally meh. It’s hard to show exactly how stunning and smooth these Springfield Armory SA-35s are. Understated excellence.

With any clone or “inspired by” design, parts compatibility is one of the first questions on the table. The Browning Hi-Power never hit mass-market like the 1911; in the postwar years, there were so many surplus USGI 1911s sometimes they were sold by the pound. This is both a blessing and a curse. A blessing because there isn’t the endless variety of specifications, and a curse because of the limited market. The Springfield Armory SA-35 doesn’t have 100-percent gunsmith-free parts compatibility, nor does any Browning Hi-Power or clone. This also means that Springfield Armory was able to take some leeway and beef up and modernize some parts.

As it stands, from our limited testing, it means a Springfield Armory SA35 part is more likely to fit in a legacy BHP or clone, but the reverse isn’t true. We were able to put SA slides and barrels on a FEG and FN, but not the reverse. Modern barrels from Lone Wolf will also have to be custom fit.

All told, expect that at least some fitting may have to occur when you start mixing them all together. We strongly suspect that this is far from the last SA-35 design we’ll see from Springfield Armory.

The ringed hammer doesn’t bite the hand, but we did find one uncomfortable place on the SA-35. The edge of the beavertail is just slightly too sharp, and it creates a sore spot right in the web of the shooting hand. This wasn’t a problem with either the FEG or the FN, and if you run into the same issue, we recommend taking the edge off with an emery board and refinishing. The original BHP didn’t have a textured backstrap and neither does the SA-35, but a little grip tape can go a long way to ensure your grip doesn’t shift under recoil.

The iron sights (they still make those?) were very close to POA/POI from the factory. Some minor adjustment was performed with a non-marring brass punch to make them perfect.

It’s never a sure thing that a BHP will reliably feed hollow-point or truncated cone ammunition — understandable when you realize the design predates the ammo. Though the folks at Springfield assured us they solved the issue, it was something we certainly wanted to test for ourselves. We brought a pile of Federal Punch and Hornady defensive ammunition to try, as well as a few hundred rounds of Magtech 147-grain with truncated-cone projectiles to test. While we cannot guarantee all SA35s will run this ammo, our example absolutely did (the original FN and FEG clone seemed to have a gag reflex).

“This is the pistol you’ll compare all the rest to” is a refrain we’ve heard about the BHP. The implication being that the BHP is at the top of the heap, and though it represents some of the best design and engineering principles of the day, the time of being King of the Hill have since passed. Still, it’s a benchmark. There are many pistols that do better than the BHP, but there are seemingly millions of designs that are far worse. Even though the fictional Thomas Magnum most often carried a Colt Series 70 or a Star Model B on Magnum P.I., the Springfield Armory SA-35 with a DeSantis GRD holster would be right at home in Hawaii; the Selleck ’stache is optional, but highly recommended.

This isn’t a do-everything handgun for the current generation of shooters, but it easily could be for the generation prior. It’s a classic handgun that seems familiar even if you’ve never laid eyes on one before. The Springfield Armory SA-35 may look like your grandfather’s pistol, but it’s definitely not. Springfield took a lot of time and care with this design, and even if you have a pile of genuine Belgian BHPs, get this one to take out and shoot.

Though we may have had visions of red dots and WMLs in our heads (we still do!), we definitely think Springfield Armory went about this in the right way: respect for the design and the pistol up front, and let consumers do what they may.

Pardon us while we secure a second for some total tactical mayhem.