Suppressor Enhancement: Making A Can Quieter 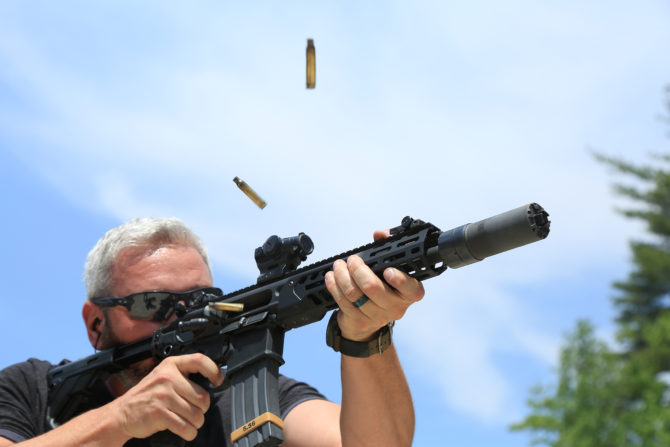 TIPS AND TRICKS TO MAKE YOUR SILENCERS MORE STEALTHY

Suppressors, often called silencers (don’t listen to idiots on the internet — both terms are correct), are a fantastic firearm accessory and can make shooting a significantly more enjoyable experience.

Manufacturers have improved silencer technology vastly over the past decade, and cans are getting quieter, more durable, and more affordable. Our selection is easily the best in human history. Still, there are ways to eke out more performance. Here we outline a few ways you can boost your cans’ abilities and dispel a few internet rumors along the way.

For the uninformed or misinformed, one of the main reasons to use a suppressor is to mitigate sound and flash. A simple way to think of this is in two parts: first, the rapidly expanding gases that escape the barrel, and then the sonic crack of the bullet traveling down range. Both sounds can be reduced, the gases with the silencer and the crack with subsonic ammunition.

A firearms suppressor works by trapping the expelled gases that follow a bullet leaving the barrel. Chambers, created by baffles or other means, trap the gases, causing them to cool and dissipate inside the suppressor and preventing or mitigating them as they exit.

It’s important to note that “first round pop” (FRP) is also something that occurs when the initial shot burns the existing oxygen inside of a suppressor, causing a noticeably louder first round. Though FRP exists with all normal silencers to some amount, people focus on it more with pistol-caliber and rimfire suppressors.

Now that we established silencers take hot gases and cool them, let’s talk about ways to allow them to do that more effectively. The most prevalent is making a can “wet” or adding something to the inside of the suppressor to cool the gas quicker. We should note that this practice is only meant for rimfire and pistol-caliber suppressors.

Rifle cartridges carry much higher pressures and adding liquids to the inside of the suppressor can make for a potentially very unsafe environment — so it’s best to leave them out.

Water is an obvious choice for an ablative for a suppressor, though any nonflammable liquid will work (some even swear by Coca-Cola). Placing a tablespoon[ish] amount of water inside the first chamber of the can and swirling it around will help negate the FRP issue, and the next few shots will be quieter.

However, the water will burn off quickly, and the suppressor will return to normal function with a magazine. Another popular option is using petroleum jelly inside the suppressor. Once again, about a tablespoon amount in the blast chamber works well. An added benefit is that the jelly will not evaporate or run out of the can, so it stays in place much longer.

The petroleum jelly will also take away from FRP problems and last significantly longer than a liquid.

As no good deed goes unpunished, the drawback to making a wet can is that the host firearm will get much dirtier, much faster. When petroleum jelly is used, it will seep back into every crevice of the host.

Gas blowback and pressure are also significantly increased; this is particularly painful for shooters whose handgun has an optic. Debris will splatter on the optic, and often cause it to be unusable. This can also happen to your eye protection.

With those downsides, why would anyone want to make a can wet, you ask? Well, according to Blake Young, CTO for Primary Weapon Systems (and holder of nine suppressor technology patents), making a suppressor wet can gain anywhere from 1 to 5 decibels of sound reduction on a 9mm can, and even more with rimfire.

Introducing a substance into the suppressor can help cool the gases faster, but what about keeping the gases in the can more efficiently? This is where the old-school wipe comes into play and, in many cases, really shines. Wipes are a consumable, physical barrier the projectile must first pass through and can tremendously aid in containing the explosive gases.

Modern suppressors using this old technique have upped the game with modern materials. The most popular is Neoprene 70A. This is currently used in many models from different manufacturers. The Gemtech Aurora II (full review in RECOIL Issue 37) is a great example of both wipes and petroleum jelly, previously discussed.

The wipes are pliable and allow a projectile to pass through and essentially seal behind trapping the gases inside the silencer slightly longer. This concept is similar to self-healing targets. The wipes are scored with an X to help the bullet pass through.

Dead Air, Lone Wolf, Thompson Machine, Energetic Armament, and numerous others have or currently do use wipes to make suppressors more effective.

Wipes are most commonly used with pistol-caliber and rimfire silencers, but not all. The Energetic Armament Vox S is a rifle suppressor that incorporates a wipe. Pew Science, a newer organization that’s revolutionizing suppressor testing, featured the Vox with and without a wipe.

Their findings regarding wipe performance with subsonic 300 Blackout are impressive. With the wipe installed, the suppressor received a rating of 58.9dB and without it received a rating of 48.4dB. This may not mean anything to you right now (you should absolutely go check out pewscience.com), but this is a significant increase in performance.

Pew Science provides impressive and exhaustive data sets, so if you’re any kind of silencer nerd, again, go check them out.

Now for the downsides. Wipes wear out — and quickly. Even with the fabric-reinforced materials, wipes generally last between 20 and 50 rounds. When talking to Mike Pappas of Dead Air Armament, he states, “I think the best application is when subsonic ammo is being used, and it may not be as effective as making a can wet, but it also doesn’t create a mess.”

As previously mentioned, wipes create a physical barrier the projectile has to pass through. This means that bullets designed to expand may start the process while still inside the can. In the case of the wipe-and-grease-only Gemtech Aurora II, ammunition must be considered.

A small silencer like that seems like a great option for a self-defense situation, before you understand only FMJ ammunition can be used. Any type of expanding ammunition will inevitably expand inside the suppressor, causing catastrophic damage.

Accuracy is another topic for wipes. Because the bullet literally touches the wipe, there can be a negative effect on accuracy.

It’s possible to assist a suppressor in mitigating sound through outside means. In the old days of Hush Puppies, it’s rumored those operatives would purge oxygen from the suppressor with nitrogen and seal the end of the can with a postage stamp to assist in the reduction of FRP.

Using dB foam, shaving cream, water, petroleum jelly, etc., can all achieve similar results. Wipes are useful and, when designed into the suppressor, can mitigate some of the downsides; however, also be aware of the safety concerns when using these.

The speed of sound changes with altitude and temperature. The speed of sound is about 761 mph at sea level or approximately 1,100 feet per a second (fps). Bullets traveling slower than 1,100 fps are considered subsonic and will not produce the loud crack down range. Sound is slower at higher altitudes and at lower temperatures.

One response to “Suppressor Enhancement: Making A Can Quieter”