Flux Defense’s MP17 Turns Your SIG Into a Compact PDW 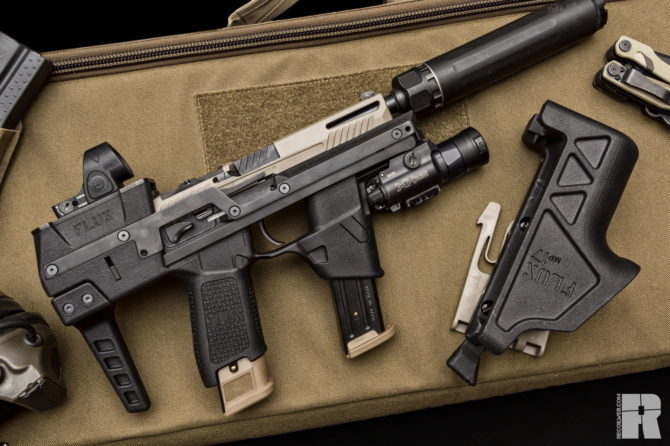 Pistol-caliber carbines have experienced a huge resurgence over the last couple of years. But really, what’s the point of a rifle-sized weapon that doesn’t have the inherent capabilities of a rifle? Yeah, we think so too. But something slightly larger than a pistol that gives increased range and accuracy we absolutely welcome. This is the concept of the Flux MP17 conversion. At the 2019 SHOT Show, Flux Defense made quite a splash with their automatic-deploying Glock pistol brace. Fast-forward almost a year, and we now have a second-generation made exclusively for the Sig Sauer P320/M17. The time spent in development really shows.

The Flux MP17 has both pistol “brace” and short-barreled rifle options, but we opted for the SBR version for a couple of reasons. First and foremost, we’ve learned from internal memos that the BATFE and the U.S. Attorney’s office may pursue charges for illegal SBR manufacture if the host weapon weighs less than 36 ounces unloaded. Since a full-size P320 only tips the scales at just over 29 ounces, we decided to simply register it to avoid any potential issues. For those following along at home, an e-filed Form 1 takes mere days instead of months, so better safe than sorry. To that end, the Flux MP17 grip itself features a handy cutout on the left side to engrave your manufacturer information directly on the chassis itself. However, that isn’t your only option. The law states that manufacturer information can be engraved on the receiver, frame, or barrel — though the chassis itself is the easy button in this instance. If you plan on moving one registered chassis between multiple hosts, carving that cutout yourself on other grip assemblies will make for an easy day.

While there’s little doubt that the Flux MP17 conversion is meant to be used with a full-size M17 or P320 variant, you can actually use it with a compact slide and barrel, with some caveats. You’ll either need to install a pistol compensator to direct the muzzle blast to the top and sides or run a silencer. You’re somewhat limited on the suppressors that can be used with MP17 in this configuration — 1.375 inches or less in diameter — but most of the common ones will be A-OK.

The “wow” factor of the original Glock Flux brace was the fact that it could be automatically deployed with a simple push of a button on the right side of the unit. And indeed, that particular bit of flashiness is retained with the MP17 conversion. If the deployment of the stock is impeded, all you have to do is grab it and physically extend it until it locks in place. Easy peasy.

Unlike the original Flux Brace, the MP17 SBR conversion features a longer length of pull, making it easier to shoulder. There’s also some texturing on the back of the SBR stock to help ensure it stays in place. Folks with longer arms than our 5-foot-10 author may still find themselves scrunched up a little, though. Integral to the Flux MP17 conversion is a holder for a spare magazine. Simply drop your spent magazine and give a swift tug on the forward spare for a quick swap. With two 21-round magazines, this gives you 42 rounds on tap without reaching for that spare on your belt.
Just forward of the magazine holder is a short Picatinny rail to accommodate a weapon-mounted light or, if you’re a weirdo, a short vertical grip (assuming you actually registered your chassis as an SBR). A free-rotating QD sling mount is built into the left side of the MP17 conversion for those who wish to run a single-point sling.

Included with the MP17 conversion is a manual safety that can be easily activated or deactivated with either your trigger finger or thumb. “The preproduction model we received can only be used with P320 chassis” manufactured before the first Sig Sauer P320 recall. But, by the time of this publication, safeties that work with all models should be available. A plastic filler piece is included with the MP17 conversion if you don’t want to use the safety or don’t have a compatible chassis. A handy tool is included to remove the extra safety, though proceed with caution during removal to avoid losing the small included bearing. The non-reciprocating bridge mount for optics distinguishes the Flux MP17 from the previous Glock iteration. No longer are you limited to a slide milled for optics, and tracking a fixed dot under recoil is much easier than one that rides on a slide.

The optical bridge has a multitude of threaded holes to accept damn near any micro red-dot, sans the Aimpoint ACRO, and various screws are available from Flux Defense. But, even if you’re running an ACRO, you can simply purchase an RMR-to-ACRO mount from someplace like KE Arms and you’ll be in business. However, the MP17 optical bridge doesn’t accommodate recoil lugs from some optical footprints, but given the MRDS itself isn’t subject to the extreme g-forces of a reciprocating slide, we don’t see this as a deal-breaker. There’s a small gap between the top of the sights and the optical bridge itself, allowing you to use your iron sights in case of an emergency — but this entire unit is really meant to be run with an optic. Taller suppressor-height sights can be used with no issues with the MP17 conversion.

If you give the MP17 conversion a quick glance, you may think the optic is mounted too high, but that’s not the case. It’s the perfect height for use when the stock is deployed. However, the assembly process is slightly more time consuming if you have a manual safety; you need to unscrew support structures from either side to clear those wider paddles. Helpfully, the hex key required to remove these reinforcements is included.

The Flux MP17 we received didn’t include the magazine catch, but we’re assured that production models will. By a fair margin, the longest part of the process is switching that assembly from one gun to another, and since the OEM magazine release relies on a tiny piece of plastic as a retention device, this can only be done so many times before it’ll break …ask us how we know…

If nothing else convinces you that the Flux MP17 is designed for law enforcement and military, take a look at the holster. The bolt pattern on the back of this outside-the-waistband holster mirrors that of a Safariland duty holster and all the accessories available for them. We attached a QLS fork to allow us to hot-swap the rig between various setups such as drop-leg rigs and belts.

Unlike many other holsters, the MP17 holster accommodates virtually any silencer and a myriad of weapon-mounted light options. Basically, if it’s a SureFire or sized similarly, it’ll work. Laser-equipped WMLs, such as the X400V and X400U, are no problem, and we were even able to do some slight Dremeling to allow WMLs designed for the SureFire MasterFire holster, such as the XH35, to fit. We’re told that an upcoming version will allow for the wider bezel of an H-series SureFire without modification. For those still rocking a legacy Streamlight TLR-1, you’ll have to look elsewhere; we couldn’t get one to fit even after removing the thumbscrew and replacing it with a smaller-profile hex nut. And if you don’t have a WML, the MP17 holster will work just as well without one.
If you’re using the new push-button safety on the Flux MP17, holstering the pistol automatically places the pistol back onto the “safe” setting. The MP17 holster also utilizes a thumb-drive-type mechanism for active retention. We were unable to defeat it without breaking out a hammer. Everything about the Flux MP17 just screams right-hander. The deployment button is on the right-hand side, and the stock itself is contoured for a right-handed shooter.

Deactivating the Sig Sauer M17 manual safety itself isn’t terribly difficult, but reactivating it is best done with your non-dominant hand. That’s OK, as getting the sucker off “safe” in an emergency is a helluva lot more important than putting it on safe in the first place. Some other controls are also more difficult to manipulate, such as releasing a locked slide; this is also best performed with your non-dominant hand.

There’s no integral charging handle with the Flux MP17 conversion, so you need to grasp the front of the slide to chamber a round or clear malfunctions. We used a Grey Ghost Precision M17 slide in our conversion, and the more aggressive front serrations really shine in this role.
Because the WML position is pushed forward, unless you have fingers like Les Claypool, you’ll only be able to use your support hand to activate your light. We found it very comfortable, especially when a spare magazine is inserted, to simply use our support-hand thumb for activation. We had to slightly modify the optic cover plate on our Grey Ghost Precision slide to fit on the MP17 conversion. This took about one minute with a Dremel and a swap of hardware with a slightly lower profile. Had we not cared about aesthetics, we could’ve simply removed it and been in the clear. The factory optic plates on an OEM Sig Sauer M17 gave us zero issues.

The grip of the MP17 conversion is slimmer than that of a normal P320. Some will love this, and others will hate it. If you have ogre hands, consider something like a grip wrap. The Flux MP17 conversion ate everything we fed it, just as with a normal P320/M17. Also, exactly like a normal P320/M17, suppressed use may require some testing and modifications — see our piece on the Grey Ghost Precision M17 in RECOIL #44 for more details. After the optic was zeroed, shots were noticeably faster and more accurate with the MP17 conversion than shooting a regular pistol. The buttstock combined with the non-reciprocating dot results in a far better shooting experience, and hits on steel at ranges over 100 yards were superbly easy.

While the Flux MP17 conversion certainly is a larger package than a typical handgun, it’s also significantly smaller than most rifles. The MP17 really hits that in-between sweet spot for a PDW. The fact it can be holstered means it could make for a decent police sidearm with some extended capability, though we’ll rock this as a truck gun and hotel room heater. Getting There: A Look at Tires for the Backcountry Hunter
Ex Historiam: Range Safety for Firearms Instructors
Shield Sights RMS in Full Production
Nikon Free Mount With Purchase of Scope Promo