At some point every consumer industry will end up with some form of standardization. Screw thread pitches were standardized back in the mid-late 19th century, and it meant that machine screws could be sourced from multiple vendors all around the world.

A more recent example is in the form of digital media storage. Several years ago there were multiple formats, all with their own pro's and con's. Compact Flash, Smart Media, Sony Memory Stick, SecureMMC, SxS, C-Flash, Mu-Card, and more. It became clear that in 2005 that SD and later, MicroSD would become the memory cards of choice. Even the longer holdout, Sony Memory Stick, was discontinued in 2010. The dominance of the SD card is no longer a question, but the reality. And all this has done is allowed the aftermarket to improve and focus on one standard.

In the firearms industry we have some standardization, with the most obvious being STANAG magazine compatibility first pushed through for NATO. This meant that regardless of the rifle used (and there are many across NATO nations) all could use the same ammunition and magazines if there was a NATO-wide conflict, presumably against the Soviet Union.

Barrel thread pitches have been largely standardized as well, with American-made 5.56mm and 22LR firearms generally using 1/2x28mm threads. By and large, 1/2x28mm is the most popular 9mm barrel thread, following by M13.5×1 LH. There are some PCCs using 1/2x36mm, first used by Colt with their 9mm SMGs in order to avoid someone attaching a muzzle device intended for a 5.56mm weapon.

Where we haven't had a standard until now with silencers is the muzzle attachment method. Proprietary muzzle devices are virtually DRM for your rifle. Each one can cost over $100, and if someone owns a silencer and a half-dozen muzzle devices for it so the silencer can be swapped from rifle to rifle, exactly what silencer company would you expect this user to buy from the next time? That's right; the one they've already invested in in the form of muzzle devices. 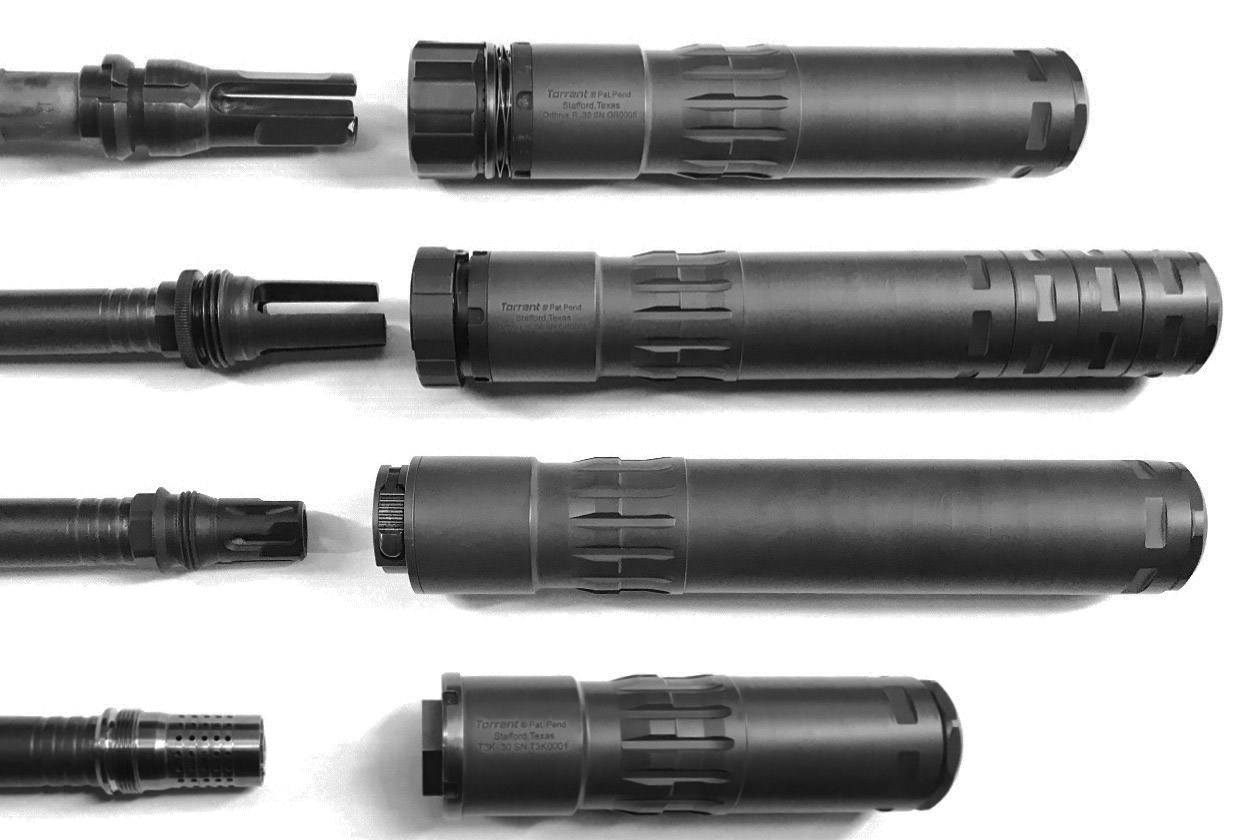 Years ago we saw this as a race between the Dead Air Keymount and the Gemtech bi-lock. Several companies outside of the originators began using these devices. Area 419 helped push the modularity envelope with their line of muzzle devices and adapters which allowed several different silencers to be retrofitted to work with an Area 419 device. Crucially the Area 419 mounts are threaded left-hand, so you won't inadvertently remove the muzzle device while you're removing the silencer.

Though they probably didn't realize it at the time, when SilencerCo released the Hybrid line with a 1.375×24 internal thread, they would be making the universal standard what would relegate proprietary muzzle devices as a thing of the past. And SilencerCo wasn't the only one working towards a modular back-end. The Gemtech Multi-mount and ONE has a similar system, as does Liberty Suppressors with the Mystic and virtually any new release moving forward.

A combination of the sheer numbers of SilencerCo mounts in existence along with the larger diameter of 1.375-mount silencers which makes it easier for mounts to fit ensured SilencerCo would be the winner. It has since been dubbed the HUB: Hybrid Universal Base. People screaming for an easier-to-use mount helped kick the can along further.

There are more than a dozen companies making devices, adapters, boosters, and more for this pattern. The HUB 1.375×24 pitch is a standard used for bicycle hubs and locks, so the wheel wasn't reinvented, but instead repurposed.

It's far too late in the game to make the change now, but we absolutely wish that SilencerCo changed the wheel a bit more and instead threaded this new module for a 1.375×24 *lefthand*. As of right now, unless you're using an Area 419 adapter, everything is threaded right-hand. This means when you're removing your silencer you can potentially rotate off your muzzle device, rotate the adapter out of the silencer, or remove the silencer as intended.

The muzzle device is the easiest fix here, as all you have to do is use a little Rocksett during installation. The internal adapters are more tricky because if you want to keep the modular aspect of your silencer, thread locker is going to make it all the more difficult. The current practice used by companies like Dead Air and Griffin Armament is to include a pair of wrenches to ensure everything stays in place, but we've still inadvertently rotated HUB 1.375×24 TPI silencers off of adapters regardless of what wrenches were used.

Years back when Surefire released their SOCOM-series of suppressors they rolled out an improved mounting system. Unfortunately, neither the mount nor the silencers were entirely backward-compatible; they aspired to make it work, but it was impossible with the new locking mechanism. With a HUB 1.374×24, you'll never have that problem, even if the silencer company goes out of business the day after you buy a can. Though we have yet to come across an adapter for Surefire muzzle devices, likely due to the complexity, we anticipate it happening in the aftermarket sometime in the future. Companies will well-established mounts like Surefire, Dead Air, and Gemtech probably can and will continue using their mounting systems while embracing the aftermarket. The Dead Air Keymo system allows folks to break into the HUB 1.375×24 TPI space. Ourselves we have some bi-lock to 1.375 adapters. Dead Air themselves enveloped the HUB pattern with the release of the Nomad, and Griffin Armament did the same thing with the launch of the Bushwhacker 46 even including adapters for their own devices. It only makes sense for newer companies to embrace the same. The Enfield Rifle Company Novus uses this pattern, as does Torrent Suppressors, and a whole bevy of Form-1 “solvent trap kits”.

With a handful of new thread adapters, namely Gemtech/GSL/Liberty/SDTA booster assemblies to HUB 1.375×24, options will open up even more.

If you're a new company and don't embrace this standard, then the market will likely show you what mistake you've made. While this method would be infinitely better if the mounts were threaded left-handed, the universal nature absolutely beats out any of the warts.

So long, silencer-DRM–you won't be missed.