CZ USA is smart when it comes to embracing the aftermarket for their firearms. They aren’t scared to team up with much smaller companies to make their weapons better, or merely different. Manticore Arms is a small company known for producing high-quality accessories for a variety of firearms. When Manticore Arms decided to produce a CZ Scorpion bullpup kit for the S1 arbine, CZ USA chose to step in and lend a hand with manufacturing. The bullpup kit is designed and engineered by Manticore Arms, but CZ USA manufactures the kit and offers it as an OEM option.

There are a lot of benefits to this setup. Sven Jonsson at Manticore Arms is a mad genius and free-thinker with a long history of designing some cool stuff. Since CZ USA produces the kit, the new furniture matches the look and feel of the Scorpion.

The end product is a relatively affordable, exceptionally well-designed, and high-quality kit that takes the CZ Scorpion EVO S1 Carbine and shrinks it into a futuristic-looking rifle worthy of the mobile infantry. The CZ Scorpion Carbine is a lot of rifle for a little cartridge. It’s bigger than most AR-15 carbines but is locked into the 9mm round. It’s even larger than most competing rifle-sized pistol-caliber carbines. A bullpup kit shrinks the 34.75-inch rifle to a mere 26.1 inches. That’s as short as legally possible before it slips into Title II/NFA paperwork territory.

For a better perspective, the original short-barreled Scorpion EVO 3 S1 with a brace is 25.1 inches long. Due to varying state laws, the Scorpion EVO 3 S1 Pistol isn’t legal everywhere, whereas the Scorpion Carbine is legal even in California with the addition of nonsense like a bolt-on grip fin and other tweaks to make it compliant in that state.

It’s compact and short enough for comfortable use inside the home. While a braced pistol is excellent, a stocked rifle provides even more stability. A bullpup gives you a rifle that’s the size of a short-barreled rifle without the short-barreled classification.

The merits and lack thereof have been discussed before.
Lastly, this is America. If you want a bullpup, you should be able to have one.

The CZ Scorpion bullpup conversion isn’t a simple drop-in kit that allows you to switch between the standard and bullpup configurations in mere minutes. While the installation isn’t permanent, it’s a process to change configurations so you can’t just do it on the fly at the range.

You need a few Allen wrenches, some roll pin punches, a mallet, and a good deal of patience. However, it’s not that difficult, and if you can assemble an AR-15, you can do it. It took about an hour while watching a video from the NRAPubs YouTube channel and following along. Pausing, double-checking, and being cautious certainly took up a good bit of time. Ensuring this thousand-dollar rifle was going to be a functional weapon was the highest priority. 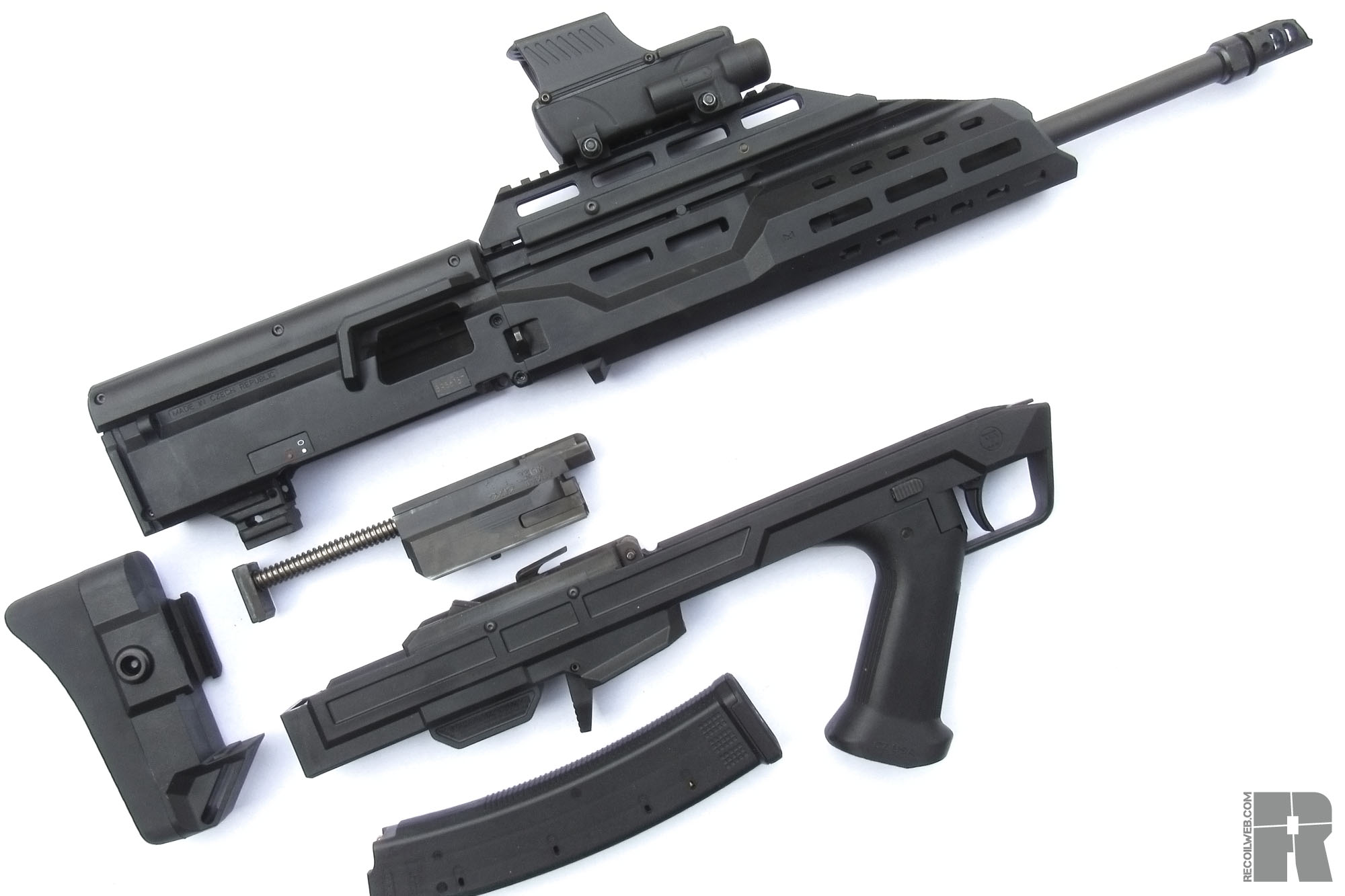 The kit is built for Scorpion models with rifle-length M-LOK handguards. There are pistol variants with the rifle-length handguards, and to convert a pistol would require you to follow the laws regarding short-barrel rifles outlined in the National Firearms Act (it’s not a difficult process; see our article here).

Some early models of the CZ Scorpion had a welded trigger pack, and if you’re unlucky enough to have one, you’ll need to break the weld to finish the build. Additionally, the bullpup kit is designed for the stock EVO 3 S1 Carbine with stock furniture. Certain aftermarket parts and components won’t work with the CZ Scorpion bullpup kit. For example, the Magpul pistol grip isn’t compatible.

Other aftermarket parts like safeties and magazine releases need to be removed and won’t be used. You can retain an extended charging handle, as that component remains when using the kit.

There are some control differences that the CZ Scorpion Bullpup adopts as it shrinks. The safety is no longer an AR-type lever, instead replaced with a cross-bolt push-button design that sits right above the thumb of the firing grip. Some would argue it’s a better design than the original because it can’t possibly dig into your firing hand, a frequent complaint amongst Scorpion owners.

The paddle magazine release has been enlarged to aid in reloading near your armpit. A lot of rail space is lost with this kit; you still have 1.5 M-LOK slots up front to attach a small light, but that’s about it. Similarly, a large portion of your scope rail is eliminated, but the included riser provides enough real estate for a typical red dot. OEM iron sights are nearly useless on this short length of rail, so in the end it was decided this would be an optics-only gun. Disassembly is also changed. To take the weapon apart, you’ll need to first remove the stock. Ensure the weapon is unloaded and lock the bolt to the rear. Pull out the disassembly pin. Use a small tool to depress the stock-retaining button and press downward on the stock. With the stock removed, the lower will separate from the upper. Slowly let the bolt slide forward and use your index finger to press the bolt backward and down to remove it. Now the gun is field-stripped and ready to be cleaned.

With the conversion kit, the CZ Scorpion bullpup goes from carbine-size to ultra-small. It makes slicing corners, working doorways, and moving up and down hallways much easier. The bullpup configuration also makes the Scorpion carbine easier to use with a single hand. With a standard Scorpion at in-the-home distances, a shooter can place effective shots into a target with a single hand, but the bullpup Scorpion is even easier to handle and shoot one-handed than a braced pistol or SBR variant, because the weight is behind your firing hand. A home defender’s off-hand can be used to call 911, open or lock doors, and collect children. For example, if you’re holed up in your bedroom with a bad guy in your house going bump in the night, you can quickly orient your gun on the door and make that 911 call.

Anytime significant changes are made to a gun, anxiety regarding reliability is perfectly normal. No one wants to spend an entire day trying to fix a weapon they made unreliable. The good news is the bullpup kit doesn’t affect weapon reliability.

It’ll eat everything from high-end defensive hollow points to cheap, crummy, and crappy steel-case stuff that comes from countries that might not even exist anymore. Defensive ammo is the more critical compatibility, if the rifle serves as a nightstand gun.

The CZ Scorpion bullpup configuration is superbly short and very easy to shoulder and get on target. With all the weight at the rear of the weapon, its center of gravity makes it quicker to manipulate and shaves reaction time when compared to the standard configuration. The gun flies up and on target without any momentum carrying your sights off their mark. To get objective times, we shot drills on a timer. Snap shots to the head of a target at 15 yards came in under one second. Failure-to-stop drills (two rounds to the chest and one to the head) were easily accomplished in under 1.5 seconds.

The Scorpion has a standard blowback action that does kick more than you’d expect from a 9mm. It’s not as smooth as an MPX, but it’s still just a 9mm. The recoil is still minimal, and the gun is very controllable. Muzzle rise is also meager and controllable. One benefit of such a long barrel with a pistol cartridge is the near absolute lack of muzzle flash. By the time the bullet exits the barrel, traditional pistol powders will achieve complete burn.

However, there are some downsides. Bullpups are notoriously slower to reload than a standard rifle. The only thing slow about the CZ Scorpion bullpup is reloading it. If you were going to war, a standard rifle may be a better choice. Inside a home, the chances of having to reload after tossing out 35 rounds of hate is rather unlikely, and you might end up with your own Wikipedia page if you do. But even still, reloading is a skill you can train for.

How accurate can a 9mm rifle be? The round itself is made for handguns and not for rifle ranges. The USMC says the M9 was useful out to 50 meters, so we grouped the bullpup Scorpion at that range. From a hasty prone position without sandbags or artificial support, the widest groups came in at 3 inches with 115-grain ammo. It tightened up a lot with 147-grain ammo, down to a 1.5-inch group. Going heavy was most certainly a better choice for this particular gun.

Is traditional slow-fire accuracy necessary for a home-defense weapon like this? Unlikely, but knowing a weapon’s limitations is important.

Accuracy at distance accuracy is one thing, but what about close-range targets? The extreme height over bore created by the riser and bullpup design introduces some complexity with close-range engagements. You must compensate for the height over bore at close ranges, because your shots will land low compared to your point-of-aim. Within 10 yards, the point-of-impact was about 3 inches low.

The optic on this gun is the Meprolight Foresight. It’s designed with multiple reticles, one of which compensates for that drop without any guesswork.

Bullpup rifles are fascinating guns and a bit uncommon in the U.S. market (see RECOIL Issue 44 for a debate on the pros and cons of bullpups). The Scorpion bullpup kit seemed to be a perfect way to jump into the bullpup world. Scorpion magazines are cheap and widely available; 9mm is cheap and common, and if you own one of these rifle you already have the most expensive part.

The CZ Scorpion bullpup rifle is small, lightweight, and more than capable for home defense for shooters of any size. It’s small, handy, and very ergonomic. The gun is reliable, and it’s also a ton of fun to shoot.

The Meprolight optic made close-range shooting a no-brainer, and 35-round Magpul magazines worked flawlessly. Bullpups aren’t for everyone, especially lefties, and the bullpup Scorpion is no different. Manticore Arms did a fantastic job of designing and engineering the kit, and CZ USA has done an excellent job at producing it. The bullpup kit took a safe queen and gave it new life. [You can visit CZ online here]
About the Author
Travis Pike is a former Marine Machine Gunner. After serving five years and completing two deployments, he departed and pursued a career in the world of firearms. He currently serves as a contributor with numerous publications and resides in the backwoods of North Florida.