Up Close With Tetiana Gaidar

While Taran Butler is well known for his standing as a world-class shooting champion and product innovator, he’s also the guy who takes many of Hollywood’s elite and educates them on how to like they know what they’re doing in movies requiring handling of firearms. His adjunct trainers also play a role in churning out some well-rounded actors who bring reality to the silver screen. Tetiana Gaidar started life in Kiev, Ukraine, with aspirations of being one of those people both as a technical consultant and as an actress. We spent the day at Taran Tactical getting to know the new gal on the range. She’s living proof that your dreams are only as far away as the ambition you’re willing to put in to get there. Oh yeah, and take it from someone who came from a country where they deal with a constant threat of invasion that the Second Amendment is a right no one should be taking for granted or trying to remove. 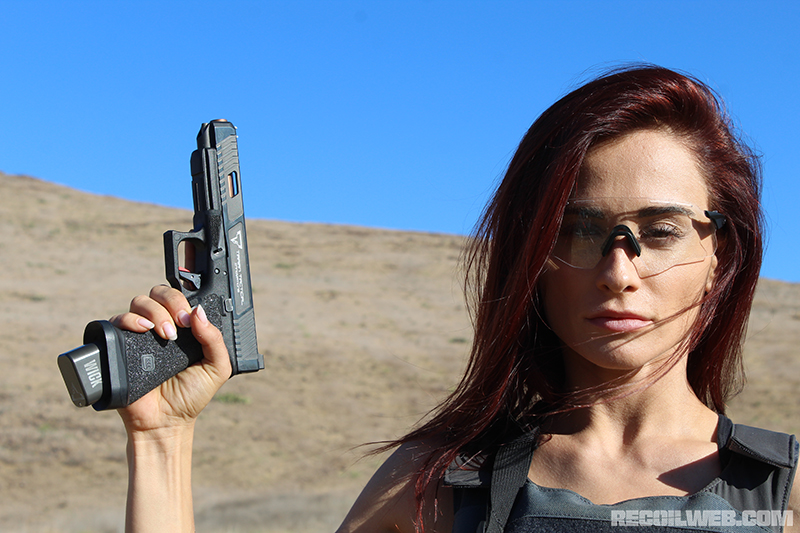 RECOIL: You have a background in ballet, right?

Tetiana Gaidar: Yes I was on So You Think You Can Dance, the Ukrainian version, season 2. Not only ballet, but I’ve done all different kinds of styles of dance.

What’s gun ownership like in Ukraine? Are people allowed to own guns?

Tetiana Gaidar: No. It’s really hard to own guns in Ukraine. You have to go to a mental institution to be checked out and various other things. It’s very, very hard there and in other parts of Europe as well, like Germany. How does Ukraine’s relationship with Russia affect the citizens’ attitude toward personal defense?

Tetiana Gaidar: It affects it a lot. My family was in Ukraine during the revolution. No one had guns to protect themselves. Russians were bombing the area where my apartment was. It’s scary because people can’t own guns to protect themselves. They wish they could live like Americans and own their own guns. Everyone thinks about guns and self-defense, but the problem is the government in Ukraine is not going to do anything. I don’t expect it to change. The only thing people are expecting is that it’ll get worse and worse. The Ukrainian government doesn’t do anything to help people with self-defense. In my opinion they should’ve made some kind of country after the revolution to have at least something for people to have for self-defense at home.

What made you want to come to the United States?
Tetiana Gaidar: To pursue my dreams of becoming an action actress and to do a female version of John Wick [laughs]. Also, I’ve loved guns since I was a little girl. But like I said before in Ukraine you can’t shoot guns, you can only watch them in the movies. When I moved here I was excited to meet Taran four years ago. 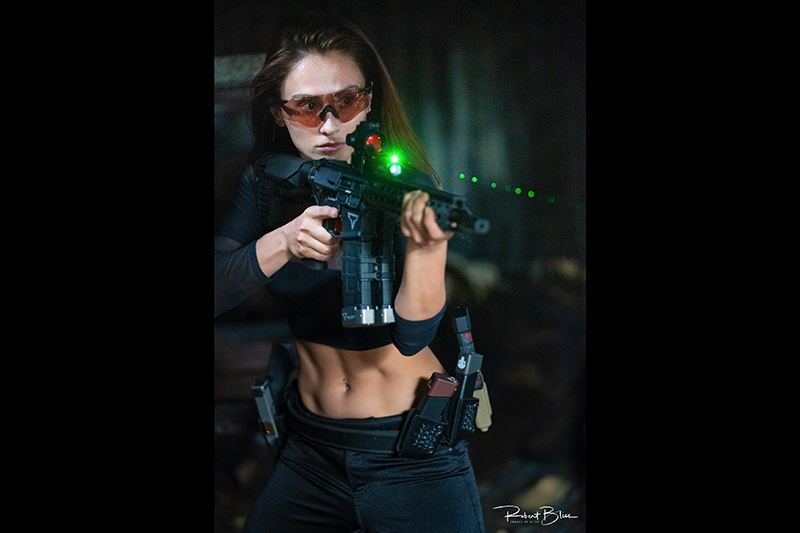 What was the journey like when you first came here?

Tetiana Gaidar: I had a concert in Philadelphia with a singer and we were performing. We were only here for a few days. After the concert I talked to the singer, who was actually my friend too, and told her I didn’t want to go back to Ukraine. I wanted to go to LA and see what life was like there and thought maybe I’d get lucky and make my dreams come true. She changed my return ticket back to Ukraine to LA and wished me the best of luck. When I flew here I had $200 in my pocket from the concert. I had no clothing or anything else. My family didn’t know what was happening. I started texting everyone I knew and messaging people from the dance world to see if they had any connections here. One of my friends replied that they knew someone who had a used car dealership and they could get me like an old, beat-up car. I’d just got my driver’s license in Ukraine before the concert in Philadelphia so I kind of knew how to drive, but wasn’t very good yet. So I got this car and started asking to see if there was anyone I could stay with. It took me like six months to find a place. I was driving around basically living out of my car trying to find a job. I ended up working like five jobs from babysitting to restaurants to grocery stores.

Then there was the war in Ukraine at the same time. My parents respected my decision to come here to try and fight to survive because they saw that in Ukraine nothing was going to change. It was getting pretty brutal and dangerous. Since I was working with a singer in Philadelphia who was somewhat political it was a bit dangerous for me to come back to Ukraine. Once she came back, within a few months her whole family was persecuted. They were spied on, followed by Russians, it was bad. She disappeared with her whole family and no one knew where she went. Then I met a good Russian girl who allowed me to stay with her for some time. On my birthday a friend of mine came out from Ukraine. He told me I inspired him to come out here and change his life. He told me he was sitting there at LAX and asked if I could come pick him up [laughs].

That was around the time that Instagram was starting to get big and it’s when I saw Taran shooting. I thought it was so cool. Then I saw him training Keanu Reeves for John Wick and that’s when I wanted to come out and meet him. I called and emailed Taran, but never heard back. Then about a year ago I saw a lot of my mutual friends were going to that range, but of course none of them would take me. Then eventually last year a friend of mine who’s a guitarist asked if I wanted to go to the range and I asked if we could go to Taran Tactical. It was right before COVID started. I came to Taran’s, fell in love with shooting, and then started helping with the range stuff. He thought I was a good teacher who had potential and talent. During COVID there weren’t many classes so I spent time training. Then we ended up training Keanu for John Wick 4 and that was really cool. 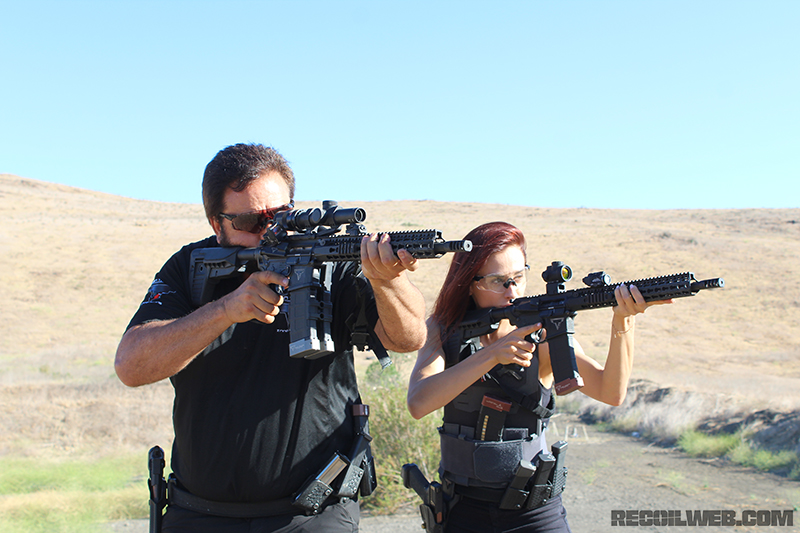 What does your role at Taran Tactical consist of?

Tetiana Gaidar: I’m a weapons specialist and doing training. I help Taran with scheduling, social media, and am like his personal assistant.

What have been your most exciting experiences so far?

Tetiana Gaidar: Definitely training with Keanu. It was like a surreal moment. He was very nice. Going to competitions with Taran and being able to do my first competition was another surreal moment. It’s like ‘I’m competing with my own guns? What’s happening right now?’ Also when I got my self-defense Glock 19 it was super exciting. The very first gun I was given was my Glock 34. It was so unbelievable to have my own gun. That was a day I’ll never forget. Taran also did a poster with me and Keanu signed it on the range. Tell us about some of the acting you’ve done recently

Tetiana Gaidar: I’ve done some action short films, not on the big screen, but they’re coming this year with Samy Naceri from the French movie Taxi. Right now I’m about to shoot this weekend for Day Shift with JJ Perry, Jamie Foxx, and Snoop Dogg and I’m super excited about that. I also just booked a commercial that I’m shooting next week for Samsung.

Are there certain actors who were your biggest inspiration?

Tetiana Gaidar: Two years ago I was shooting my first movie. On set, the director of the movie asked if I wanted to go to the set of Ford v Ferrari. I met Jon Bernthal my first day on set. I wasn’t too familiar with who he was, but I just see this guy who started talking to me in Russian. He had these cute pitbulls with him and we started talking and then after we’d talked the director asked me if I knew who that was. Jon told me he was Moscow theater trained. So we clicked right away. He became a big mentor of mine. He helped me get into school to study with a friend of his. He’s supported and helped guide me over the years. If I need someone from the same background who studied back home it’s very inspiring. I was able to meet Matt Damon, and he asked me if we met before. Maybe it’s because I look a little like Penelope Cruz and they worked together [laughs]. Do you also practice martial arts?

Tetiana Gaidar: Yes, when I was 10 years old my mother wanted to put me in ballet school because her dream was for me to become a professional ballerina. In Ukraine and Russia, the situation was that if you didn’t have a real job, which wasn’t artistic, then you can’t make good money and people don’t respect you. My mom loved art, but I told her that I wasn’t into it because there was no money to be made and I wanted to be a spy or government agent. My mom was angry, but told me if I wanted to do that I needed to go to martial arts school. We were going home that day and having this argument and there was this school we were passing by and she literally drove me to the school that day and signed me up to do Kung Fu. I loved it so much that I did it for 10 years. After that when I was 18 my best friend died. It was hard for me to comprehend that someone can die that fast for no reason. I started dancing as a bit of therapy for that experience and that led me to professional dancing and being on So You Think You Can Dance? And after that I did Krav Maga and Jiu jitsu. When I moved to LA I discovered hot yoga and got a certification in it and learned how to become a contortionist. Then when I met Jon Bernthal, he was training with one of Klitschko’s boxing trainers, Steve Petramale, and I got to train in boxing. I met people from 8711, which is like a stunt training community. They trained Keanu for John Wick and other actors for action movies, so I started taking courses there in various things. I met Taran after that and became a competitive shooter. 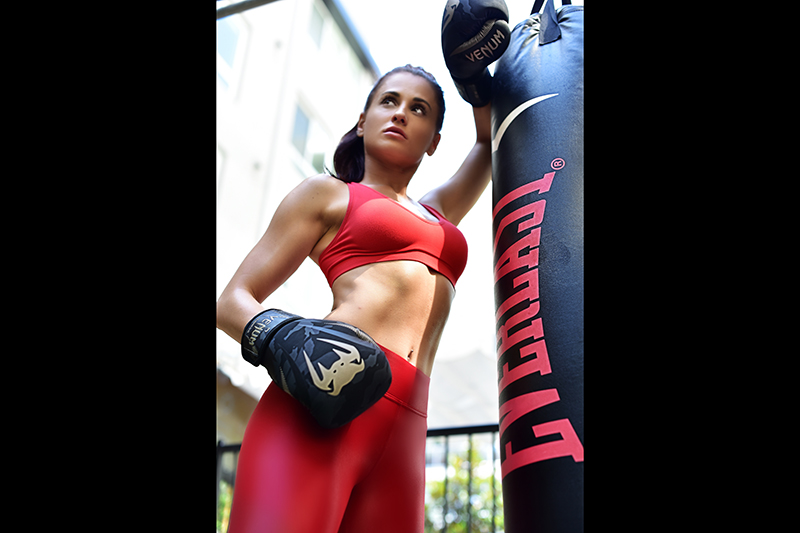 What are the biggest goals you wish to accomplish?

Tetiana Gaidar: I really want to see my family. It’s been like seven years that I haven’t seen anyone and it’s been kind of rough. I want to accomplish the goal of becoming an action actress, but the bigger picture is to be able to speak for those people who can’t speak for themselves and inspire people like Keanu did with me to do something with your life that you would never dare to do. To follow something that moves your heart. I want to tell stories and inspire people to change their life for the better. Eventually I’d love to have a charity with my sister because it’s her dream to have an animal rescue charity. And eventually have a family of my own some day. 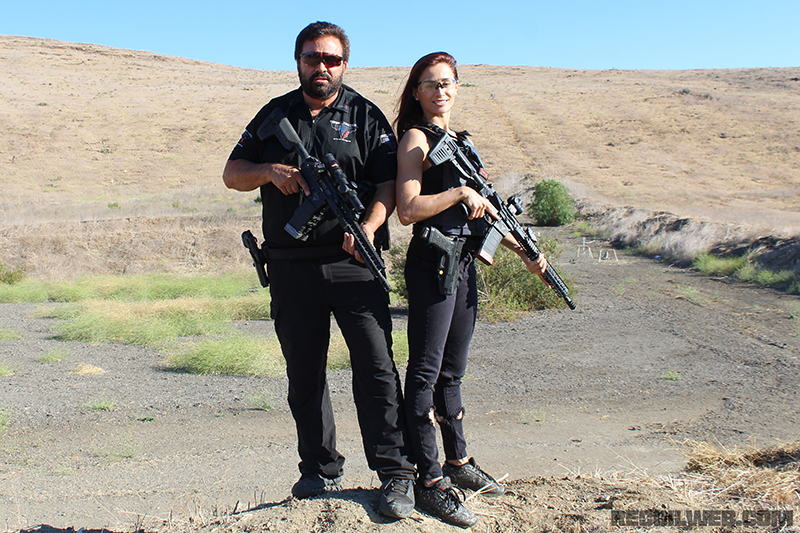 7 responses to “Up Close With Tetiana Gaidar”